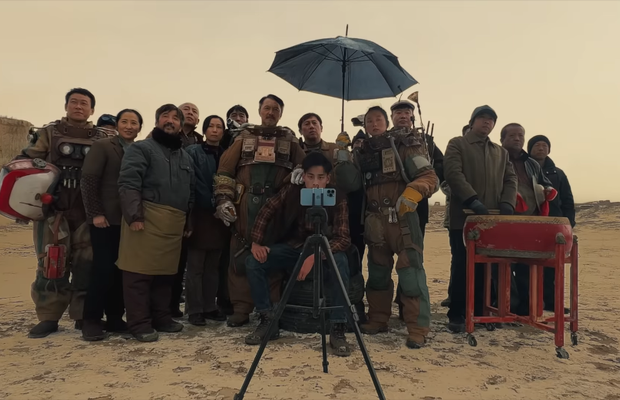 With the coming of Chinese New Year and the commencement of the Year of the Tiger, TBWA\Media Arts Lab have collaborated with Apple for their fifth-annual New Year film for the brand. Chinese director Zhang Meng worked with Apple on the epic and heart-warming 23-minute short film titled “The Comeback,” shooting it entirely on iPhone 13 Pro and iPhone 13 Pro Max.
The Comeback is actually a movie within a movie – a story of a son coming back to his father in a rundown Chinese village, where people greet him as a big-shot director, even though he is only a stunt double and is yet to start his directing career. His father, in a bid to revive the village and bring more hope to his own son, suggests that the son directs a movie about the place being akin to the planet Mars with all the villagers taking part.
The Comeback becomes a passion project for the whole population of the village, including a donkey, that later becomes a crucial part of the process. Courage, inspiration, and some hard core believing in your dreams are just a handful of the ingredients of this project.
Not lacking in storyline or character development, the short film also manages to showcase all the assets of the newest iPhones – features like industry leading stabilization, Slo-Mo, macro, Low Light, Ultra Wide and Telephoto cameras are all put to use in the filming of the ad. On a few occasions viewers are shown the usage of Cinematic mode, which allows the switch of focus among subjects and the creation of an incredible depth of field effect.
The Comeback spans a few genres – sci-fi, traditional Kung Fu action, feel-good comedy, and director Zhang Meng with the help of director of photography Luo Dong used only the three cameras of the iPhone 13 Pro to shoot all of it. Satisfying every ambition for the making of this film inside a film, the iPhone 13 Pro came to use for the filming of the Behind the Scenes as well.

The Golden Drum Will Be Drumming Again Live on 23rd September