Created in collaboration with Oak Productions and Bullitt, the films feature Schwarzenegger going undercover as a colorful car salesman on a mission to sell gas-guzzlers 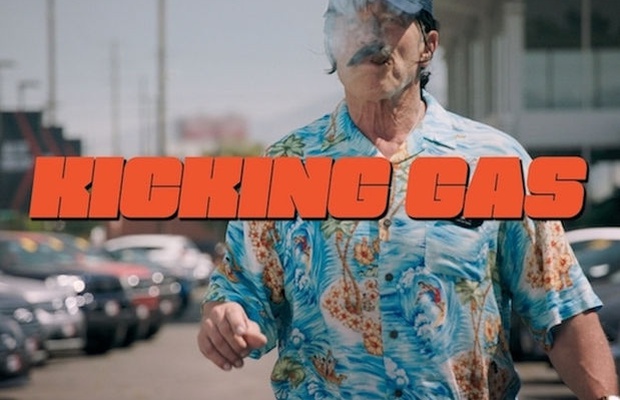 Superconductor has launched its first campaign for Veloz, a non-profit group dedicated to increasing electric car sales. 'Kicking Gas' is an integrated campaign starring Arnold Schwarzenegger that mimics the launch of a summer blockbuster. Created in collaboration with Oak Productions and Bullitt, and directed by Emmy-Award winning Josh Greenbaum, the films feature Schwarzenegger going undercover as a colorful, moustache-wearing used car salesman on a mission to sell gas-guzzlers. Rickett & Sones is the director/photographer duo responsible for all still photography.
The campaign includes a 3-minute video, three 15-second spots, out of home, and social and display advertising — all centered on the Kicking Gas theme. Schwarzenegger, who worked across the aisle as California Governor to enact historic clean transportation and clean energy initiatives, launched 'Kicking Gas' on his social network this morning.
“Over 16 years ago, I set out to prove that you can have the car you love and the clean air you need,“ said Schwarzenegger. “I greened my fleet of personal cars, including my Hummers. And I challenged the auto industry to do the same. They now have the electric vehicle technology to outcompete gas-powered cars.”
'Kicking Gas' is part of Veloz’s 'Electric For All' public awareness campaign, a multimillion-dollar effort uniting car manufacturers, utilities, clean air advocates, government and other stakeholders. It is an unprecedented alliance of unlikely partners, and the use of humor, not fury or fear, to engage hearts and minds. With that ethos as the center of the strategy and execution, the creative stakeholders crafted a campaign that aims to inform through entertainment. Schwarzenegger’s interactions with would-be customers provide a hilarious way to demonstrate electric vehicles are simply better cars – for drivers, for the country, and for the planet.
“Tough guy Arnold Schwarzenegger has no problem making fun of himself. Imagine a world leader like that—willing to do what it takes for the greater good,” said Mary Nichols, who serves on the Veloz leadership team. “For some members of our unlikely coalition, this campaign is tricky and treads difficult territory. Change is hard. But everyone knows the future is electric, and California, for one, is committed to capturing the market advantage.”
“Our goal with Kicking Gas is to bust barriers and kick down the norms of traditional electric car campaigns,“ said Josh Boone, executive director of Veloz. “Veloz brings together an unlikely coalition of automakers, public-policy leaders and other sectors as positive world changers. We are focused on igniting public imagination through innovative and bold messaging—electric cars are more fun, more performance, and more exciting than other cars. Everyone should know they are simply the best drive ever.”
Founded by The Russo Brothers, Justin Lin, Todd Makurath, Luke Ricci and Chris Adams, Superconductor specialises in creating Must See Marketing — content that audiences choose to watch and experiences they love to engage with. They do this by breaking down the barriers between clients and creators — including the writers, directors and technologists behind many of Hollywood’s biggest hits.
“Superconductor sits at the intersection of advertising and entertainment, so a campaign promoting electric cars with Arnold Schwarzenegger is exactly what we were built for,” comments Chris Adams, Superconductor CCO. “We’re really honored that Veloz trusted us to help bring this to life.”