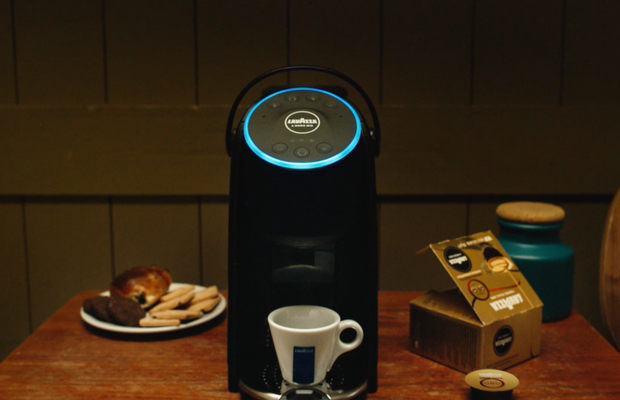 Ever wanted a coffee but didn’t have the energy to get up and make it yourself? Lavazza has solved the problem for you. Dubbed by the coffee brand as ‘the espresso of the future’, their brand new coffee machine comes integrated with Alexa, Amazon’s smart speaker. The result? You can ask Alexa to make you a coffee from bed, in the living room or even while in the bath.
The new campaign showcases artificial intelligence in a fun, humorous way that gives Alexa a personality of her own. With sassy remarks and replies, as well as remembering your coffee preferences, the ad shows the talking coffee machine making waves across the world. From the North Pole to the US and even in Italy, where it’s been coined as, ‘The Italian espresso on everyone’s lips.’
Giving the ad its engaging copy, visual presence and direction, director Ali Ali, ECD Rafael Genu and ECD Christian Comand from VMLY&R speak to LBB’s Nisna Mahtani about bringing the “Alexa, make me an espresso!” campaign to life.

LBB> An AI-based software that can make you a cup of coffee. It really is ‘the espresso of the future’. What was the brief for this ad and how did you interpret it?

Rafael> The brief was the product itself, as it’s very particular and innovative. Smart Espresso was probably written on the brief. In the Italian version of the ad, we sign off with a line that actually originated the whole idea of the script: “L’espresso sulla bocca di tutti” (The Italian espresso on everyone’s lips).
We thought this idea of word of mouth spreading would be appealing and coherent to the product - also a very nice excuse to showcase a list of features.

LBB> The campaign is fast-paced and visually bold. Why did you decide on this style and why is it effective?

Ali> We’ve been doing this style for Lavazza for quite a while now. It’s fast-paced and keeps you guessing. We didn’t really invent this style, it’s been circulating in the ad world for a while now, probably pioneered by the Google Pixel spot from 2018.
Cristian> Every time we face a new brief we try to reinvent the style and even now we’ve just come back from another shoot with Ali in Greece where we’ve taken it one step further. This new film is also for A Modo Mio (Lavazza’s range of capsules and machines for domestic use) but this time more focused on the technology that actually makes the coffee.

LBB> The dialogue is quick, witty and has a great sense of humour. What was the process of creating the script and did it have many changes from its initial conception?

Rafael> Yes, it had many many changes since its first version. Working with Ali for the third time in a big production, also the collaboration was much more intense this time. When one thought they had closed the script, the other would come with a new idea or a different take and re-open the discussion.

LBB> Alexa has many quips that we hear. How did you go about showcasing artificial intelligence in this funny, charming way?

Ali> We actually wrote lines that Alexa would not say. Used a bit of creative license here and there to make her funny(er). Giving her a bit of a human character.

LBB> Why was it important to use humour within the campaign? How involved were Lavazza with incorporating this?

Ali> Humour always works. That’s why. It just does. It’s been a shit year, so ads should do their part in keeping spirits up, as opposed to depressing people. Lavazza is usually very involved in most of my choices.

LBB> There are quite a few different scenes and clips in the campaign. From start to finish, how long did it take to create?

Cristian> With Lavazza and Ali we are creating from the moment we write the first line of the script until we hear ‘It’s a wrap’ on the set. The whole process took more than eight months, as it was part of a wider global campaign with many different assets, including one brand and another five or six product films. Shooting the whole thing took us seven days!

LBB> Were there any unique challenges you faced when it came to making this ad?

Rafael> We have established a format for the global Lavazza film assets with More Than Italian (2018/19) and A Modo Mio (2019/20). The risk was repeating ourselves, whilst the opportunity was taking the format somewhere new. We hope we have picked the latter.

LBB> What has the response been like so far and has it been as you expected?

Rafael> The campaign went on-air during the summer in Italy and has just aired in the UK. It’s still too early to know, we still haven’t seen any tracking results, but it seems that, at the least, Alexa is pretty happy with it.

LBB> Were there any behind the scenes moments that you can tell us about?

Cristian> There are at least two anecdotes regarding the final scene of the ad. First, the actor was not supposed to be that one. We tried with a different actor on the second day of shooting, but Ali didn’t like it, so he did the whole thing again (including rebuilding the set in the studio) to bring it home only on the last day of shooting. It was one of the last scenes we did. The second thing is that this scene is supposed to pay tribute to Kubrick’s 2001, as you can see here.

Cristian> With Ali Ali we have developed a very special way of working that is highly appreciated by Lavazza. Ali has total liberty to change the script and reinvent it, and he also likes and respects our work. He used to be an art director in Cairo and we like to think we are a trio when with him, and not a duo.

The Evolution of Storytelling After Lockdown and Digital Growth