Athlete and Artist Activism Should be Encouraged 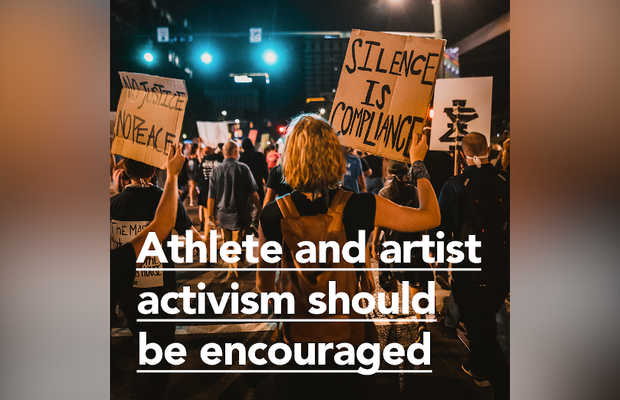 It’s been an odd year and looking back, who could have imagined the monumental changes which were about to unfold?

In a moment of absolute chaos, Covid-19 gave the world time to look at some of the injustices faced by millions and to come together to actively celebrate what many of us take for granted.

From those protesting the killing of George Floyd and supporting BLM, to actively taking a stand every Thursday to show support for national health workers, activism in 2020 has been demonstrative and driven by social media.

As a result, it’s never been more important to take a stand.

This has meant a lot of challenges for brands as well.

It is no secret that ‘purpose’ has been a buzzword in the marketing scene for many years.

There is a pervading cynicism towards cause based marketing and brands which are insincerely ‘taking a stand’ (aka performative activism) but on the other hand, in 2020, remaining silent suggests to consumers that brands don’t care.

Whether it’s ‘purpose’ around the environmental, societal or even gender topics, company CSR approaches have been chock full of ‘it’ topics to talk about for some time. Often followed by not enough action.

Sports and entertainment has always been political, and athlete activism is not a new phenomenon. In 1966, heavyweight boxing champion Muhammad Ali refused to be drafted into the US military, citing his religious beliefs and opposition to the Vietnam War.

Athletes, artists, brands and communities are now coming together as one like never before, striving for change and demonstrable social consciousness.

As a result, the perennially talked about Millenials and Gen Z’ers expect their idols to be true to themselves and have the integrity to articulate that on their huge personal and professional platforms.

We only have to look at the incredible activism of Lewis Hamilton and the Mercedes F1 team as they ensure that the BLM movement isn’t hidden from the screen.

The F1 also created the ‘#WeRaceAsOne’ campaign, feeding into this new age of greater engagement, keen to use the platform to show thanks for the work people have done around the world in the fight against Covid-19. The campaign also aims to promote initiatives around inclusivity.

We also saw the Milwaukee Bucks opt out of the afternoon’s matchup with the Orlando Magic to take a stand against the shooting of Jacob Blake at the hand of Kenosha police. A handful of Major League Baseball teams followed. “As a white player on this team… how can we show support?” L.A. Dodgers ace Clayton Kershaw told media and made clear statements about social justice, police reform and other issues. Kneeling during the national anthem was one thing. But now top-flight professional athletes have become willing to vacate games, lose financial winnings, concede championships and give up trophies and career moments—all in order to make a point about what’s right.

The number of brands making systemic changes to address racism in response to Black Lives Matter has also soared. Some of the biggest brands like Nike and P&G initially got involved and now even smaller brands are now stepping up.

Nike, of course, have been tackling societal issues and inequalities for decades and their “For once, Don’t Do It” campaign was the culmination of decades of brand investment and dedication to the cause.

Whether it’s pushing more women into sports or using Colin Kaepernick as a key testimonial, the brand has never shied from approaching issues head on. The Kaepernick campaign led to a 31% boost in sales the week after, regardless of the conservative media reaction that it prompted.

Towards Autumn, brands such as Patagonia went all out on the US Elections with the brutally honest statement “vote the assholes out” stitched onto tags in specially chosen shorts –  “we have been standing up to climate deniers for almost as long as we’ve been making those shorts,” said Patagonia spokesperson Tessa Byars.

In the UK, brands including insurance market Lloyd’s of London and pub chain Greene King have apologised for historical links to slavery, donating to charity groups serving black communities.

Where celebrities might once have put their name to a perfume to further their personal brand, Gen Z’er Jaden Smith is capitalising on his fame to promote a progressive agenda. Through Just Water, a bottled water brand he founded in 2015 with his father, Will, the Hollywood actor is looking to tackle deforestation and minimise the demand for materials made from fossil fuels.

The real worry though is that brands using claims of being together, of bringing the fight to our political leaders, becomes as meaningless as other marketing buzzwords, like “authenticity” and “influencer”.

It has to be about more than that at this stage, it is about exemplifying tangible action.

For some brands, overt activism runs a genuine risk of using the topic to gain market attention. Consumers aren’t idiots after all and can smell inauthenticity and being patronised a mile off. But for many, many brands, taking a stand on major issues can’t be ignored anymore. It’s time to take a stand.

Some data we know:

•   A diversity and inclusivity study by First Insight, Inc. highlights that, in the UK, 86% of women and 74% of men expect immediate accountability and action from brands who commit missteps.

•   Two-thirds of global consumers would switch, avoid, or boycott brands based on how they address controversial issues (McKinsey, 2018)

•   Some athletes and artists have been able to shine a light on injustices in the world thanks to a renewed sense of shared community, so it’s time to listen to them even outside of their “arenas”

•   Working with athletes and artists, and being aligned with worthy causes, is new currency in a post-COVID world