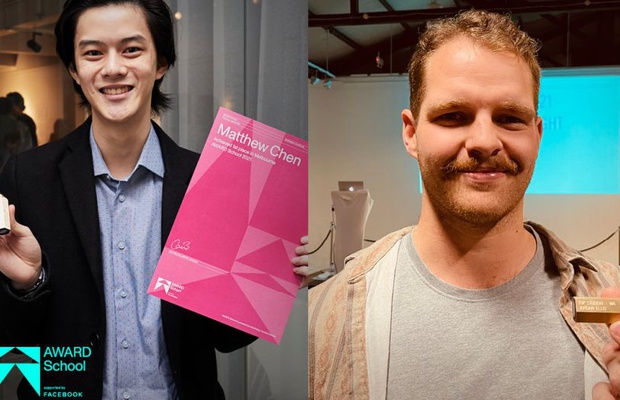 The Australasian Writers and Art Directors Association (AWARD) has announced this year’s AWARD School student finalists in Victoria and Western Australia - who will go into the running to win the coveted 2021 National Top Student Award on August 10.

Matthew Chen from Victoria and Jordan Ellis from Western Australia took out the top gong in their respective states for their incredible body of creative work developed throughout the year.

They each received a coveted AWARD School Gold Pencil for their outstanding efforts as part of in-person graduation events held last night in Melbourne and Perth to celebrate the industry’s brightest emerging talent.

Chair of AWARD and M&C Saatchi Australia chief creative officer Cam Blackley congratulated the two state winners and praised all the 2021 graduates for their hard work and commitment throughout yet another challenging year in AWARD School’s 38-year history.

“Every year we are seeing depth and quality of creative talent consistently improving and I couldn’t be prouder of the work these students produced to take home the top honours in their respective states,” he said. “We congratulate them and wish them the best in their creative careers, which are sure to be bright. We also thank our incredible AWARD School heads, tutors and guest speakers for making this yet another high calibre and inspirational year for our students.”

National and NSW AWARD School Co-heads Mandie van der Merwe and Jack Nunn said the commitment shown by their fellow school heads and tutors in each state had been “beyond amazing”, as had the engagement from students around the country.

“Students and tutors alike rose brilliantly to the challenge of making 2021 AWARD School one of the best yet,” Mandie said.

Jack added: “Following a change in AWARD School program last year to online only, we were thrilled to reintroduce face-to-face learning sessions, tutoring and networking events this year, with large numbers of students from across the country still able to join our program virtually. That’s the beauty of AWARD School, there are so many learning options available to students to best suit where they live and how they want to learn and interact with our incredible lineup of speakers, tutors and judges, whose combined efforts make AWARD School not just possible but hugely successful."

This Way Up: Australia’s Advertising Festival of Creativity Rescheduled to 2022