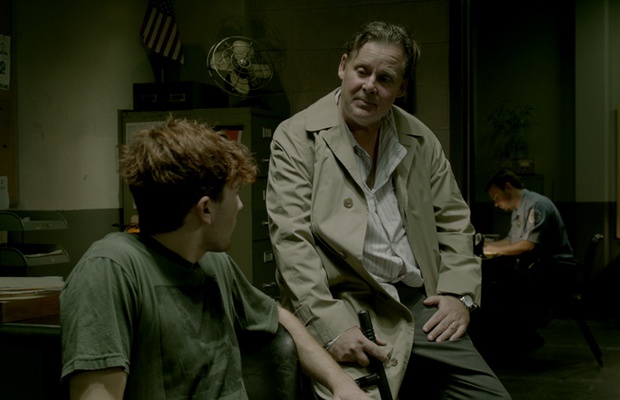 It's not everyday that a 4-minute improv scene performed in a comedy club turns into an enduring classic, but back in the late-80’s heyday of Second City Chicago, that’s exactly what happened.  Joel Murray and a young Chris Farley, in an instant of electric comedic genius, took a shout out from the audience, and performed a scene about a father picking his son up from the drunk tank.  Filled with equal parts of comedic moments and emotional heartbreak, the scene stayed with Murray for 20 years and became a mainstay of Second City’s traveling show.

That’s what drew Rob Pritts to lens "Proof," a word-for-word remake of Murray’s and Farley's  skit. To stay as true to the original as possible, Pritts collaborated with Murray, a seasoned actor who recently appeared in The Artist and AMC’s Mad Men, and brought in Daryl Sabara (Weeds, Spy Kids, World’s Greatest Dad) to play the Chris Farley part.

“When Joel told us about the script, I was so intrigued by his recollections of Del Close,” Pritts said. “Close is considered the godfather of long-form improvisation, and the mentor to a generation of comedians.  Joel told me that Close always pushed his performers to find the emotion in a piece more than the slapstick. And in this script, drawn from the imaginations of Farley and Murray, I saw a poignant father and son story, and a powerful tale of growth and relationships. I wanted to keep a somewhat theatrical approach to the lighting and blocking.  The final result is a little more Mamet than the stripped-down slapstick of an SNL sketch. It was an absolute honor to work with Murray and Sabara to put this piece into a format that will live on.”

“Rob did a great job of bringing this scene to film for the first time,” said Blair Stribley, who acted as executive producer for the project.  “Directing this gave him an opportunity to stray a bit from the comedic material for which he’s known, and to work on a short film that is more emotional and dramatic in nature.  Joel is an amazing actor, and he just happens to be a friend of ours.  Also, it was incredibly fun to see Joel play this part now that he’s a father with two teenaged sons!”