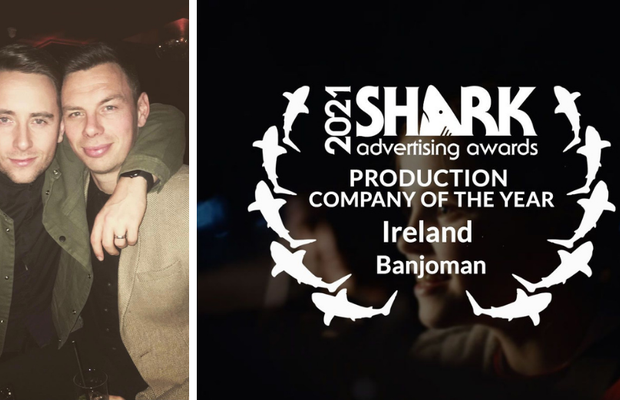 Banjoman has been named Production Company of the Year, following a glut of wins at the 2021 Shark Awards. Each year, awards are granted to outstanding work in the fields of Advertising & Advertising Craft, Design, Digital, Short Films & Music Videos.
This year, Banjoman picked up eight awards across four projects with the big winner being ‘Let’s Make Christmas’ directed by Dermot Malone for RTÉ. The spot which ran over Christmas 2020 in Ireland was a big favourite of judges. The short film about sibling love and resilience touched the heart of Irish families facing a locked-down Christmas. The global coronavirus pandemic had seen many decade-long traditions thrown into turmoil - not least one of Ireland’s favourites, the Late Late Toy Show.
Dermot picked up further Shark awards for Weir & Sons ‘Ambition’ and Homestore + More ‘A Christmas Surprise’. Director Mia Mullarkey also won a Silver Shark for Best Animation Direction on Aviva’s ‘The Trip’
Their full list of wins is as follows:

Quickly becoming one of Ireland’s most celebrated independent production companies, Banjoman is only six years old, yet its growth as a business has been exponential and international. Its roster has swelled to seven directors who are creating work across the world, including founder Dermot Malone who is repped globally.
Throughout his career, Dermot has remained determined to create work that provokes real emotion and stays with people long after they watch it. The same can be said for ‘Let’s Make Christmas’ (RTÉ), which has been particularly well received, winning three golds and a silver.
Director / Banjoman founder, Dermot Malone comments: “I am beyond proud of how much Banjoman has grown. Making ‘Irish Production Company of the Year’ at an internationally recognised show like the Sharks is a dream come true and we simply couldn’t have done it without the belief and support of many great agencies, brands, filmmakers, clients and collaborators. This is, of course, testament to the work of our own team, who have been incredible. Vanessa Briscoe as production manager and Pat Hinkson behind the scenes have been pivotal in getting us this far. For me though, special mention must go to the big guy - Matt D’Arcy. Matt has been instrumental as Head of Production in transforming what started as a one man project for me as a director, into an internationally recognised production company with some huge breakthrough talent on its books. And we’re only getting started! Named this company for my great mentor, Gerry Haugh and am hoping he’d be proud today.”
Head of production / partner, Matt D’Arcy comments: “It has been our passion as a business to take ambitious talent and propel them and their work forward on our shores and abroad. Banjoman has always stood behind authentic, human-led stories and we are living in a time in which brands are calling out for this type of content. To have our commercials and directors recognised this year at the Sharks is an outstanding feeling and one that will only push us further in 2022 and beyond. We cannot be thankful enough for the clients and partners who have supported us on our journey so far. ”