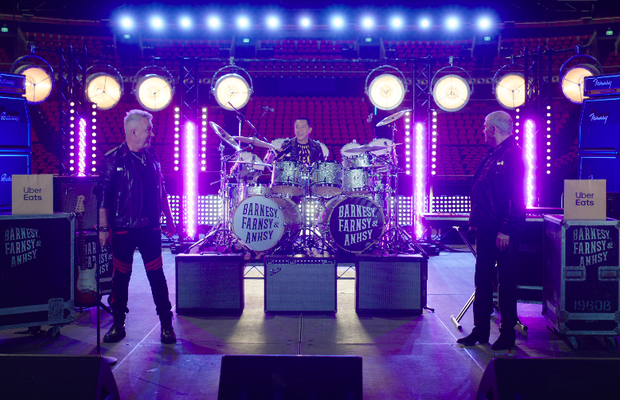 A new rock act named ‘Barnesy, Farnsy and Anhsy’ joint-headlined by Jimmy Barnes, John Farnham and Anh Do will appear on screens as the latest addition to the Tonight I’ll Be Eating Campaign for Uber Eats via Special Group.

The iconic rock duo Farnham and Barnes, both inductees into the Aria Hall of Fame, are now joined by comedian Anh Do on percussion, despite some ongoing reservations from the famous ‘You’re the Voice’ singer, “He’s an inept drummer but we got him in the band because Uber wanted him in the band so that’s why he is there.”

The Working Class Man rocker also had hesitations about the formation of a band for the commercial – “I thought it was never going to work,” but the chance to link up with Do and Farnham was too good to pass up, “When I was a young fella and John first released Sadie, from the time he was a young popstar right up to today, he is one of the best singers I’ve ever heard.”

Following the award-winning run of the last Uber Eats campaign – the playful integration during the Australian Open – regional general manager for Uber Eats ANZ Jodie Auster said it was important for the campaign to continue to surprise and delight.

Anh Do described his experience on the set of the latest campaign with “two awesome Aussie legends,” as a privilege having grown up listening to two of Australia’s most celebrated musicians – “Jimmy Barnes is the ultimate rockstar,” he said.

Says Cade Heyde, managing director, Special Group: “We’re beyond thrilled that the likes of John Farnham, Jimmy Barnes and Anh Do have now joined the ranks of Uber Eats. We’re proud that being in this campaign is now a bit of a mark that you’re a true part of Aussie culture for celebrities in this country.”

Fans will be able to see this iconic trio in action on television, phone and computer screens alongside compelling outdoor creative from October 13.