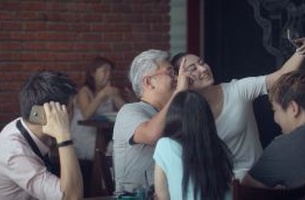 BBH has been working with Mentos globally for multiple years, and succeeded in building a substantial social media following for the international candy brand. This has been done through a series of ‘social experiments’ that bring strangers together in real life, challenging today’s world that is increasingly dominated by online connections. The experiments are orchestrated specifically to be released on social media.
Titled ‘Mentos WiFi’, this latest piece explores how people would react when encouraged to make a connection with a stranger. The experiment involved taking-over the WiFi in a popular café and giving internet access to unsuspecting visitors only once they had completed the challenge of making a real-life social connection. Tasks included making a stranger laugh out loud, winking at someone and dancing with a stranger. Hidden cameras captured genuine reactions and candid interactions.
Says Weisian Lee, Senior Producer, BBH China, “The success of the Mentos social media strategy lies in the fact we are exploring what makes us human and our basic need to connect in a world dominated by technology. The dozens of different versions of this experiment reflect a new way of storytelling across a system of formats. Each piece of content offers a sneak peek into the full story, whilst being impactful enough to stand alone.”
“These experiments go back to the core of social media – being social.”, says Jan Heeling, Global Chief Marketing Officer, Perfetti Van Melle – the company behind Mentos. “While social media allows us to observe and even connect with strangers from a safe distance, the Mentos Wifi experiment shows real-life emotions. The medium itself is the ideal space to share these emotions with our consumers.  Strangers are being confronted with that initial awkwardness, the unpredictability of how the other person will react, followed by the final coming together of strangers forming a connection. All done in a matter of seconds. The topics we explore are universal insights that everyone can relate to. ‘Mentos WiFi’ is a light-hearted reminder that the experience of a real life connection can’t be replaced.”
The experiment was carried out in a café in Kuala Lumpur that attracts a broad mix of clientele. Five cameras were hidden in strategic locations. The only talent was a waitress to assist people and gently encourage them to carry out their challenge.
The original 93 second version has been edited into dozens of versions, including horizontal and vertical formats that will be used in social media campaigns across multiple markets in Asia including Indonesia, Philippines, Vietnam and Singapore.