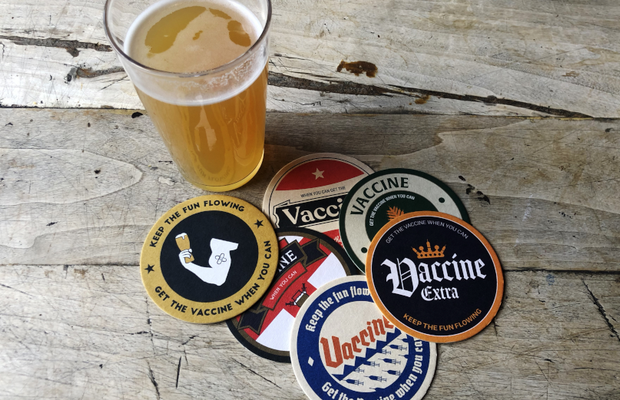 An ingenious new campaign to encourage drinkers to get vaccinated to help keep British pubs open is being rolled out across the UK - via beer mats.

The beer mats have been designed to evoke classic beer brands with common beer brand symbolism, such as German fonts, ribbons and coats of arms, and each bears the call to action: ‘Get the vaccine when you can - keep the fun flowing.’

Pubs have been some of the hardest hit businesses in the pandemic, affecting owners and employees alike, with forced closures and financial hardship under lockdowns - and one of the main reasons that pubs have been able to reopen their doors is down to the NHS vaccination programme.

But with infection rates still high despite the nation unlocking last week on so-called Freedom Day, it’s now more important than ever to persuade punters to get vaccinated so that pubs can continue to stay open and avoid further lockdowns or restrictions. So the beer mats are being distributed to pubs across the UK encouraging punters to get vaccinated to limit the spread of Covid-19 which ultimately will keep the fun flowing and keep their beloved pubs open.

The vaccination beer mats are the brainchild of creative agency Grey London and are currently being distributed to independent pubs who haven’t had the financial backing of chains and breweries during what have been difficult financial times during the pandemic, such as the Shortland Tavern, Bromley, and The Villager Freehouse near Meopham, Kent. 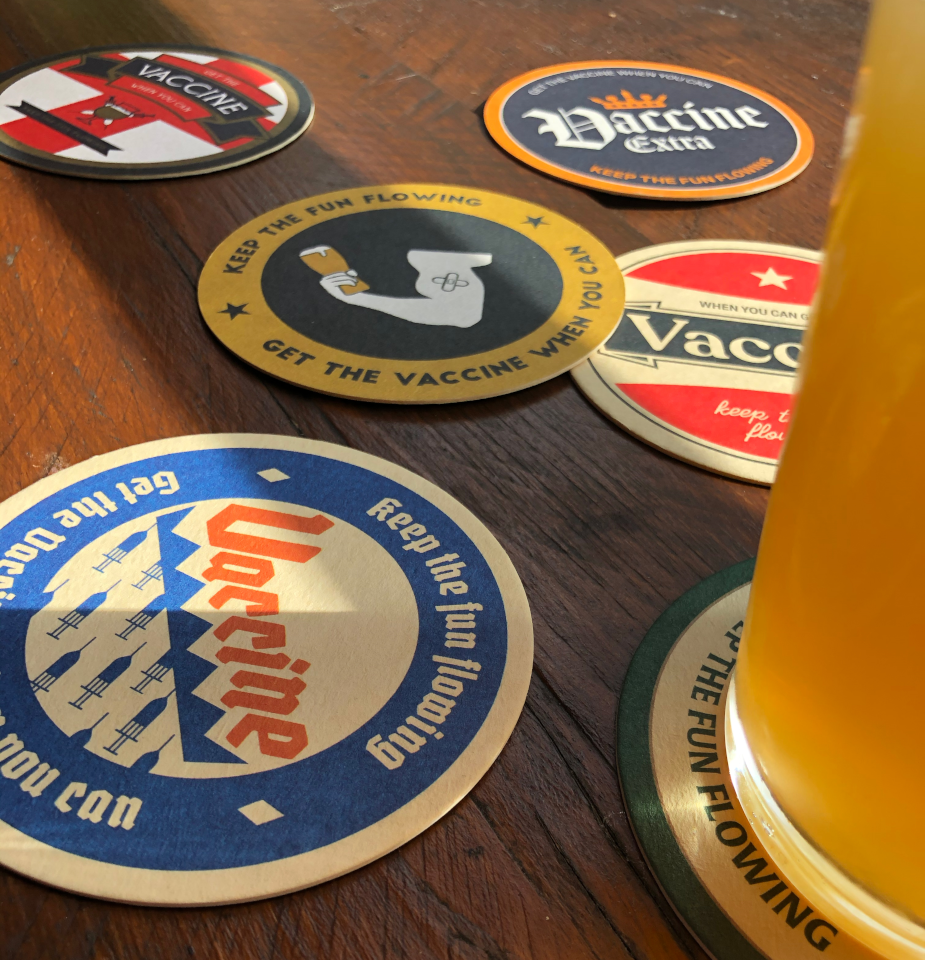 Andy McGuigan, the landlord of the Spit & Sawdust in Elephant and Castle, London, is backing the scheme and has already adorned his pub tables with the vaccine beermats. He said: “Forced closures, paying full rent, no insurance payment, extra loans (debts) and loads of no shows - tough year is an understatement. The only way we can start to fill the huge hole of last year is simple. Please get vaccinated to protect everyone.”

Grey London’s creatives Liam Campbell and Thom Farrall added: “We love pubs. No not just because we enjoy a pint, but because they’re part of British culture. They’re the focal point of so many communities, the place to offload to a friend after a tough day at work, the place we exchange views, discuss ideas and make plans. We’ve all been worse off without them, not least the struggling landlords. So now they’re open again, we want to make sure they stay open, by doing the only thing we can. Getting vaccinated.”

Grey are also asking for any breweries or beer brands to get involved, so their designers can create new vaccine beer mats based on their brands, a fun way to engage with their customers and support their pub managers in keeping the fun flowing.

Currently, almost 55.6% of the UK’s adult population are fully vaccinated but uptake rates are slowing, particularly amongst young people.

According to NHS England figures released last week, one in three 18-to-29 year-olds have still not had a first dose of the Covid-19 vaccine, with the virus running rampant in that age group, with more than one in 100 aged 20 to 29 testing positive last week.

But the vaccination rollout is now at its lowest rate in seven months - and it's hoped that the vaccine beer mats could play some part in persuading reluctant punters to get jabbed.

After all, pubs remaining open is vital if British life is to get back to normal, as pubs are basically the nation’s collective living rooms.

July 19th was the first day that many pubs could reopen because it hadn’t been profitable for them to do so beforehand due to lack of outside space or down to the size of the premises.

It’s vital that they can continue to remain open and remain safe spaces - and the key to that is a successful vaccination rate, which the jab beer mats hope to boost.

And if you’re a brewery or a beer brand that would like to get involved, please contact Kat McKinney at Grey London.