To celebrate 50 years of the UAE, FP7 McCann teamed up with Dubai’s Emirates NBD bank and the Dubai Astronomy Group to find the region its very own cluster of stars 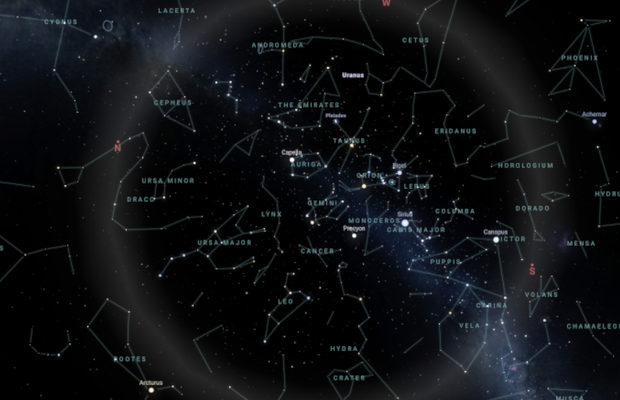 It’s not everyday a nation gets to celebrate 50 years since its inception. And for one as young and innovative as the UAE, to mark this occasion in the calendar required a different form of thinking. It was by chance that FP7 McCann’s regional head of strategy Tahaab Rais stumbled upon a starry night when taking a break from a game of cricket which planted the seeds for what would eventually become The Emirates Constellation.
Teaming up with the Dubai Astronomy Group, the campaign for Emirates NBD bank was a fitting tribute to not only the anniversary of the region but also to its founder Sheikh Zayed.
To hear more about the campaign and also the plans for the future, LBB’s Natasha Patel caught up with Tahaab, who also directed the film, and Vicky Kriplani, group account director at FP7 McCann.

LBB> Where did the idea for The Emirates Constellation come from and why was this the right way to mark 50 years of the UAE?

Tahaab> I always get our teams to think about occasions where our brands can be meaningful to the people and the communities they serve. While plotting the 2021 calendar out for Emirates NBD, one important occasion for the UAE’s 50th National Day in December. Now that stayed in mind.
One night in February this year, I was playing cricket in my backyard, bowling in the nets I’ve set up. I looked up to the sky during a water break. And saw it lit up with stars. It was one of those nights. Being a fan of astronomy and of space since childhood, I’ve always sought to create shapes in the sky whenever I saw a collection of stars up there. So, I did that on that night too. And subconsciously, I’d like to think because the National Day brief was on my mind, the UAE’s shape came to mind. I could see it in the night sky amidst the stars. And eureka – there came the idea: “what if this nation, a star among constellations, could have its own constellation among the stars?”
The UAE has achieved so much in just five decades. So, given how iconic this occasion was for the UAE, the country deserved an iconic idea in turn – and what better way than locking a special place among the stars for our wonderful nation as it turns 50.

Vicky> When I first heard the idea, I loved it! It was a no-brainer. But a part of me also wondered how we could do it. We needed someone credible and authentic to partner with. We discussed the different astronomy groups and institutions who would be ideal to partner with us in bringing the idea to life. Dubai Astronomy Group were, quite honestly, the first ones we contacted and met, and their response to the idea as well as towards working together was very encouraging.
The challenge then lay in charting the UAE sky and bringing the shape of the UAE to life by identifying the perfect seven stars that were unclaimed in any other constellation.
The next challenge lay in ensuring this constellation was registered and built into a reputed app so it owned a space not just in the night sky but also on people’s digital devices.

LBB> You touched upon this earlier but what was the process of selecting the final seven stars like?

Vicky> It was very challenging. We had to find stars that would be visible from the UAE in the first place. Next, their distance from each other and their placement needed to form the shape of the UAE when joined together. And finally, they shouldn’t be part of any other constellation that existed and was popular. Courtesy of Dr. Hassan Hariri and his daughter Ameena, we managed to discover and find a space in space for the nation’s constellation to take its shape and claim its space in time.

LBB> We have to talk about the music in the film, it's so beautiful. Why was this the perfect tune?

Tahaab> As a filmmaker, music breathes life and emotion into any film. So, I often start the process of storytelling with establishing what the music is. It helps set the tone. I’d briefed the vision for the soundtrack to my friend Joe Dickinson, who has composed tracks for some of my most cherished films.
The brief was to create a perfect marriage between the beautiful UAE National Anthem (but a softer piano-based sentimental rendition of the national anthem) and astral sounds inspired from our favourite sci-fi films. And he did a fantastic job of nailing it in the first round itself.
It’s perfect because it marries the tradition and values of the UAE with the scientific and interstellar aspirations of this nation.

LBB> Plotting the night's sky can't have been an easy task! How long did this project take from inception to completion?

Vicky> We spent approximately three months with Dubai Astronomy Group as they studied the night sky and identified an unclaimed space for The Emirates Constellation. That was the most challenging task.
Once that was done, the next challenge was getting this into a live experience for viewers across the UAE. And that’s where the integration of the constellation into the star map apps came into play. This was something we were planning in parallel, and it took us four months to get this locked in and implemented.

LBB> How much does the UAE's founder Sheikh Zayed play a role in this project?

Tahaab> Sheikh Zayed was the founder of the UAE. He brought the seven Emirates together. And holds so much respect, love, admiration, and undying loyalty from everyone in the country. He set the vision for this nation. He set his goals high. So, the film pays a tribute to him, his words, his vision, and his ambition. Hence, since the treatment, I’d aimed to start the film with his memorial where the structure’s elements resemble a constellation of stars. It worked on so many levels. It’s the perfect tribute to the founder. Also, I’d aimed to end the film with his memorial too – with his memorial looking outwards to space, metaphorically, to the constellation of the nation he created. It’s a perfect way to recognise and a nod to his legacy.

LBB> What has the reaction from Emiratis been?

Tahaab> There has been a deep admiration, love and adoration for the idea among UAE Nationals and anyone who considers the UAE home. We’ve seen a lot of stories and positive sentiments travel on social media. And it’s heartening to see it be liked.
Vicky> The respect earned by Emirates NBD for doing this idea has been phenomenal. We’re very pleased to see Dubai Astronomy Group get its much-deserved acclaim and recognition too courtesy their partnership with us on the idea.

LBB> What's next for The Emirates Constellation?

Tahaab> We have it registered now. We have the app. We have influencers and media platforms sharing it. We are aiming to get this shared with school students. We are intending for this to be in curriculums. We’re planning on getting this into planetarium shows. We’re exploring ways to see constellation projectors feature this constellation.
We’d love for this to become a part of more apps and be featured in digital and television programming to do with astronomy, stars and constellations!

Tahaab> We really want this idea to become part of culture – in the UAE and globally. It should be shared in schools, in planetariums, be featured at NASA, in anything and everything to do with space and stars. And we’re open for collaborations.
Vicky> All eyes on our planet have been on the UAE, with this idea it’s time for all eyes in the sky to be on the UAE too!