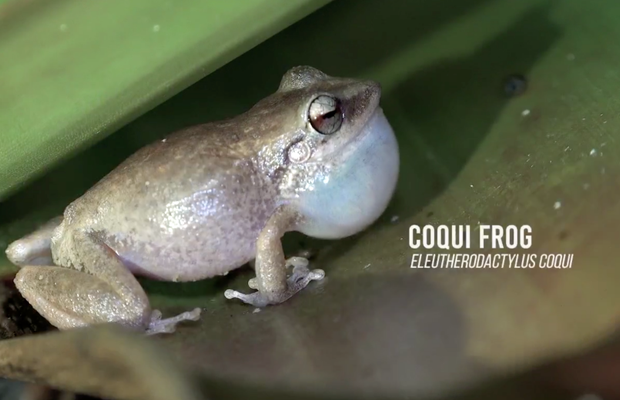 One thing that’s seldom written about brands is the way that they embed themselves in our psychogeography and in our sense of identity. Sure, there are the global blockbusters that keep us comforted wherever we go in the world, but there are also those brands that are so interwoven in our culture that they can’t help but remind us of home.
Medalla Light is such a brand – launched in 1979, its very existence is tied up with Puerto Rican identity. It was created to celebrate the overwhelming victories of the island’s athletes in the Pan-American games. Medalla, medals.
When the brand was looking to expand, mainland USA was the obvious place to look as 5.6m Puerto Ricans now live there. The brand didn’t have a huge budget, but what they did have was a great deal of focus. That helped the team at DDB Puerto Rico create a launch campaign that would go straight to the heart of the diaspora. In order to grab attention, they recreated the call of a local icon: the coqui. It’s a tiny frog native to Puerto Rico, whose distinctive two-note call is a familiar calling card.
Tiny speakers were embedded in packs that were distributed to retailers around the USA, in locations like Orlando, Miami, New York, Massachusetts, Maryland, Connecticut, Pennsylvania, and New Jersey. Puerto Ricans doing their groceries were surprised to hear a familiar sound – and social media and TV coverage amplified the campaign further. In the end 1.4m cases of Medalla Light were sold in the first three months of the campaign launching in the US – exceeding the initial target by a million.
LBB’s Laura Swinton caught up with DDB Latina Puerto Rico’s CCO Enrique Renta and CEO and President, Edgardo M. Rivera.

LBB> What was the original brief from the client?

Enrique & Edgardo> Medalla started successful market inroads at selected test markets in the US such as the Miami and Orlando area back in 2018. By 2019 the brand was confident to launch a broader distribution effort and escalate its presence in communities with a high density of Puerto Rican consumers.
Budgetary constraints remained a challenge to the communication efforts. Manufacturing and distribution costs where a priority. Still, the client was aware of the need of specific instore promotional activity to generate awareness of Medalla Light’s arrival.
That was the problem “Sounds from Home” was designed to solve.

LBB> And what were the strategic insights that drove the campaign – did you have any unexpected or interesting data that helped you?

Enrique & Edgardo> The deep meaning of the Coqui frog and the deep connection its song generates in every Puerto Rican are well known insights of our community. This “melody” is a sort of lullaby in the background of the Puerto Rican night.
It’s believed this frog only thrives in Puerto Rico and legend says it dies when taken away from home. This narrative emanates a deep sense of patriotic symbolism that has made the Coqui a cultural icon widely represented in the arts and music of our country. You will find it in souvenirs, stamps, murals and even as the inspiration for 2019 Miss Puerto Rico Universe national costume.

LBB> How did you get to the idea of the Coqui?

Enrique & Edgardo> We wanted to play with the use of sound, applying motion activated speakers to activate the store aisles. This led us to the sound of the Coqui as a sort of national morse code understandable and enticing to any Puerto Rican.
LBB> From a production point of view, I can see there are a number of challenges – first of all there’s the sound design! How did you make sure that the sound of the coqui would be ‘just right’ so that Puerto Ricans doing their grocery shopping would immediately recognise it?
Enrique & Edgardo> We used the best quality recordings of the pristine song of the Coqui, a repetition of two basic musical notes well known by all. Besides, the pitch and sound volume of our speakers led to a very natural and accurate reproduction of its music. The sound is so ingrained in our mind that It’s just impossible not to recognize.

LBB> And how did you embed that into the packs?

Enrique & Edgardo> It was quite ingenuous. We tested several motion-activated devices until we arrived to the one that gave the most satisfactory results. Then we decided the best way to install them was hidden inside mock-ups of our package. A small aperture acted as a lens to allow the device to detect consumer motion, while the actual pack acted as a resonance box to distribute the sound. When several where activated at the same time the effect was similar to the sounds of the Puerto Rican forest.

LBB> How many frog packs did you create and how many locations did you activate them?

Enrique & Edgardo> It depended on the store configuration. We had a dozen ready to display at any given location. But our aim was to hit specific stores to surprise consumers and then use the material recorded by hidden cams to reproduce and amplify the activation on social media.
By just activating a couple of stores per city we were able to reach millions online.

LBB> And how did you identify where you wanted to activate the packs and how did you work with store owners in order to get them on board?

Enrique & Edgardo> We relied on our distributors. This companies are quite knowledgeable of their markets, they understand where Puerto Ricans buy, and have built strong relations with store owners. Still, it was difficult to get managers to allow us to disrupt their stores, as the project proved successful it became easier to get them on board.

LBB> From a PR and social perspective, how did you amplify the activity?

Enrique & Edgardo> As we said, we relied first on social media and owned media such as our brand website, Instagram, Twitter and Facebook pages. The activation was followed by press and video news releases and media kits. Our community managers were ready to fuel the conversation and helped spread the videos, encouraging sharing and publishing stories that worked as micro ads for the brand.

LBB> What were the most interesting challenges involved in bringing this work to life?

Enrique & Edgardo> Covid 19 was a huge challenge, we launched in the midst of the pandemic and made our second wave by Christmas 2020 and January of 21. It was intended to happen in winter, since extreme cold climate could provide contrast and make a tropical sound more surprising and the uplifting reactions even more dramatic.
But, it also represented huge challenges of coordination and for the production crew.
All along we had a trusting client who believed in the idea and gave total support from their corner, facilitated contact with distributors, eased our way into the markets and helped us deploy the activation successfully, against all odds.

LBB> There are some amazing stats – 1.4m cases sold in 3 months is incredible! I just want to check, is that 1.4m sold in the US or across all markets? And how much of an increase is that compared with what they’d typically sell?

Enrique & Edgardo> It really is incredible. Our client estimated sales targets to around 400,000 cases across all markets and we basically blew past those numbers by 1M cases. This created some supply and logistic issues for the brewery and for the distributors, but they were able to keep up with demand at the end of the day.

LBB> I’d love to know about the Medalla Light brand itself – what’s its place in Puerto Rican culture and what kinds of emotions do people associate with it?

Enrique & Edgardo> Medalla Light brand was born back in 1979. The brewing company, Cervecera de Puerto Rico, wanted to celebrate the many medals won by the Puerto Rico delegation at the Pan-American Games held that summer in San Juan, Puerto Rico. That is the reason why it was named Medalla,(meaning Medal in Spanish), and why its can is golden. Its origins are then tied to a strong sense national pride and achievement. The product went on to earn top honours on its own, by achieving many medals and recognitions worldwide for its quality and taste. Accolades that found their way into the package design telling a history of global triumph. Today, Medalla is synonymous with quality, and a symbol of the spirit of excellence that thrives in the best examples of Puerto Rican character, talents and values. A can of Medalla not only provides us refreshment, it is a source of pride.
LBB> From the case study, it looks like the campaign was picked up outside of the US too and by Puerto Rican media. I know the initial target was Puerto Ricans in the USA, but did the campaign have an impact on beer sales within Puerto Rico?
Enrique & Edgardo>  Inevitably the campaign had a ripple effect in the island, been covered by the media back home and shared and enjoyed among our consumers. The interconnection between Puerto Rico and its diaspora is very strong and there is a constant exchange and flow between both communities. Medalla Light sales in the island remained strong thru the period but, taking into account the maturity of the brand in the market and its efforts island wide, it would be difficult to isolate how much could be a direct result of this campaign.

LBB> Can you tell me about the DDB Puerto Rico agency? How big is it and what are its strengths?

Enrique & Edgardo> We are a group of around 120 professionals from different disciplines.  Our range of services and expertise expands across different marketing disciplines. From in-house capabilities for strategic planning, brand positioning, research and analytics, media planning and placements, public relations and influencer marketing, marketing technologies and all creative services from ideation and design to production management across existing and emerging media. Our advantage is that we can provide clients with the creative resourcefulness by looking at their business problems from different perspectives with talent from different backgrounds and that diversity has resulted in business growth both for our clients and us.

LBB> And what are the agency’s creative goals?

Enrique & Edgardo> We are a very ambitious team, eager to earn for our agency world-class status. We aim to mirror thru our creative product the relevance and excellence our country is recognized for in many other fields such as music, culture and of course, beer brewing!

Production Line: How SunsetDDB is Taking a Lead on Green Production