Behind the Work: Rethink’s Minimalistic Messages for Mothers Against Drunk Driving

Joel Holtby, partner, head of art and creative director at Rethink on the artistic value of minimalism, effective ambiance and sending important messages 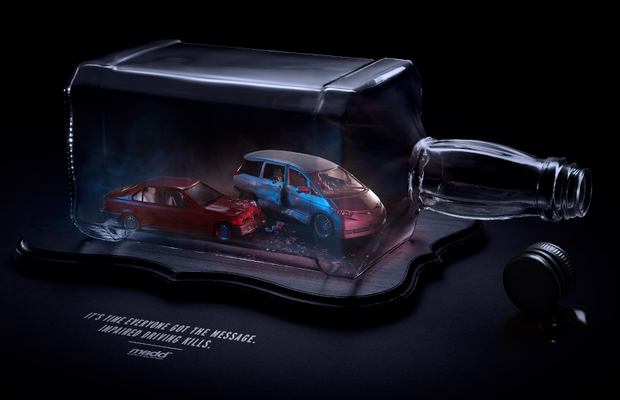 With bars only finally starting to reopen and social gathering limits rising, it feels as if a night at the pub is something many people have desperately looked forward to for quite some time. But it’s important to remember the need for responsibility, especially when facing the threat of impaired driving.
In Canada, an average of four people are killed and 175 more injured due to impaired driving accidents on a daily basis. And with Covid-19 circumstances causing an increase in alcohol sales, it created an opportunity for MADD Canada to remind the public of the importance of adherence to national law - by creating sombre models of what can happen when someone who isn’t sober gets behind the wheel of a car.
LBB’s Josh Neufeldt spoke to Rethink’s Joel Holtby to discuss the creation of this new campaign.

Joel> At Rethink, we take an approach to look into culture and the world to drive our ideas. The brief itself was open. Drinking and driving is still a problem in our daily lives. Covid-19 has caused alcohol sales to increase and drinking and driving rates to increase through lockdown. Data from this drove us to think of a campaign that would help people to see what is in the bottle can be incredibly dangerous when driving.

LBB> How did the message in a bottle aesthetic come out of that brief?

Joel> The brief didn’t drive the aesthetic but rather the original idea did. We wanted to create something that was powerful and visually striking. Really, the direction was inspired from looking at ships in a bottle and that most of those model builds are in large alcohol bottles. We wanted to have the models be hyper-real, which is why we worked with model builder Matt Kett.

LBB> The legalization of cannabis is still relatively new in Canada. How has this impacted impaired driving rates in Canada and what research drove this campaign?

Joel> We focused mainly on drinking and driving for this execution. Although impaired driving includes cannabis, the main message and visual twist is on alcohol. For the research, we’ve been supported with data from our partners at MADD.

LBB> Sound design is a very noticeable aspect of the videos, as you can hear an audio change when the camera zooms to being outside the bottles. What were your aims with it and how did you work with the sound designers to achieve them?

Joel> We knew that sound was going to play a big role in bringing drama into the film portion of the work. We worked with Ted Rosnick at Vapor who really brought a lot to this. From the ambiance to the little sounds within the scenes themselves. We wanted to make it feel like the sound was trapped inside the bottles. You can feel the audio pan in your ears as you exit the bottle and it continues to only come out of the bottle's opening.

LBB> What was the process of working with Matthew Kett like - how did you go about designing the right models for the spots?

Joel> Matt is so talented and was one of the first people we talked with about the idea. From the start he was a creative partner; we worked together on crafting the scenes. Picking the right vehicles to simulate different scenes, adding in custom made elements like child seats in the minivan collision as well as all the damage that he custom made and produced by hand to make the scenes feel real. It was a very collaborative project with him.

LBB> The aesthetic of the dark surrounding the bottles is very powerful. What were your aims with the aesthetic and visuals of the film?

Joel> Our aim was to land the gravity of the scenes and the message. We were dealing with models that we wanted to feel as real and as heavy in subject matter as possible. The atmospheric design of the scenes is really to land a lasting and memorable impression.

LBB> The films are quite minimal but there’s quite a lot of detail in them. What was the production like and how did you pull off the final product? How much was captured in camera vs. in post?

Joel> ‘Less is more’ was something that we kept talking about through this production. Fewer camera moves, less in the need for action in the lens and less for music. We spent a lot of time crafting the models and the scenes but kept the action simple. This production was a perfect marrying of practical and CGI. Adrian Armstrong was a big part of this as well, as he really brought it to life through the lens. We shot all the scenes using a probe lens with a motorised robotic arm. We then shot the bottles with the exact same move. Afterwards we worked with Wingman VFX to recreate the bottles in post to remove any imperfection in the move to make everything line up perfectly.

LBB> What has the reaction been like to the video?

LBB> What challenges did you face when doing this project? How did you overcome them?

Joel> This project was a labour of love from all who were involved. From model building, technical shoots and beautifully crafted CGI. We had our challenges especially as we created this during Covid-19 where being on set can be a real challenge. But, everyone dug in and found solutions to every little issue that arose.