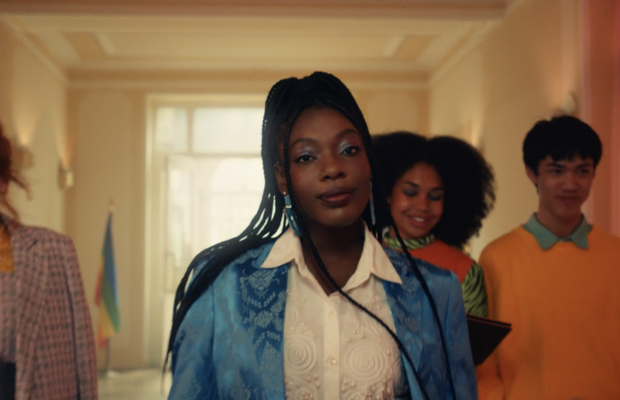 HP believes that, if there's one group of people capable of securing and shaping Earth's future, it's Gen Z. The technology brand's holiday campaign, 'Madam President', features what it likes to call Gen Z "contributors", a flip on the common term of "influencer" to recognise people actively contributing to a better society and a better future.
Created by Goodby Silverstein & Partners and directed by Epoch Films' Emma Westenberg, the film stars Jacqueline Azah, Fionn Ferreira, Tiana Day and Kavya Kopparapu. Jacqueline is an activist and the co-founder of J&H New Beginnings, an organisation geared toward enacting positive change within local communities. Fionn is an inventor and conservationist whose tool has helped remove microplastics from the ocean. Tiana is an activist and organiser who led the Black Lives Matter march across the Golden Gate Bridge. Kavya is a computer scientist and the founder of Girls Computing League, an organisation that helps bring more females into the male-dominated field of computer science. Each of them not only starred in the film but also helped craft everything from the story to the set design.
"Viewers won’t recognise the stars of the film, and that’s exactly the point," reads the campaign's launch press release. "Instead of casting well-known influencers with thousands of social media followers, HP decided to feature real young people who are effecting real change in the world, essentially making the case that contributors, not influencers, are the people whom we should know and follow."
To get the full lowdown, LBB's Addison Capper chatted with Malika Reid, art director, Kate Cullen, copywriter, and director Emma.

LBB> What was the initial brief from HP, and what were your initial thoughts when you saw it?

Malika> Gen Z is one of the most adaptable, creative and collaborative generations ever. HP realised that they’re not just using technology for school or work; they’re using it to bring real change to the world. The brief was to show what Gen Z can accomplish in the future with a little help from HP.
Kate> When we first heard the brief, we were excited. It takes a very special client to want to use their platform to highlight what other people are doing.

LBB> And how did you wind up with this idea?

Kate> Around the same time we were briefed, Black Lives Matter protests were happening all across the country. We’re based in San Francisco, so when we found out that the march across the Golden Gate Bridge was organised and led by 17-year-old Tiana Day, it was clear that we needed her - and others like her - to tell us how they imagine the future, not the other way around.

LBB> What was the research process in the earlier stages of this campaign? What were the key insights that informed this approach?

Malika> Technology is Gen Z’s superpower, so we sought out people using their superpowers for good.

LBB> Why was HP keen to speak to Gen Z for their holiday campaign?

Malika> Gen Z is showing us how we can shape our future. They’re not waiting for someone else to do it for them; they’re doing it themselves, despite the challenges they face. HP thinks that there’s something we can all learn from that, especially now.

Emma> I received the script from the agency Goodby & Silverstein through my production company Epoch in July. I was right away very interested because the narrative of a hopeful future inspired by real kids that make these kinds of impacts really spoke to me. I also love creating imaginative worlds around real characters, so that visually it looks appealing and surprising but still grounded because of the ties to the people that it houses.

LBB> And Malika and Kat, why was Emma the right director to bring this vision to life?

Malika> We didn’t just want Gen Z-ers in front of the camera. We knew we needed someone from that generation behind it. Which is just one of the many reasons we loved Emma for this.
Kate> She was determined to make this piece as authentic and real and true to our contributors’ vision as possible.

LBB> There’s a real vibrancy to the visual style - what were your main aims and thoughts when it came to the aesthetics?

Emma> I think the most important thing was for the world to feel inspirational but still approachable. This is not some crazy idea for the future, this is a future that is being built.

LBB>  The stars of the film are all incredible but not particularly well-known. It might have been more obvious to cast popular Gen Z influencers, for example. What was the strategic thinking behind this approach? And how did you land on this group?

Malika> We wanted to find people who aren’t just influencing society; they’re contributing to it. So we started referring to them as ‘contributors’ instead of ‘influencers’.
Kate> It was important to us to feature people based on what they do, not how many followers they have. Each of the contributors we featured in the film are creating positive change in the world and share the same values as HP.

LBB> Each of the contributors to the film also played a direct role in its production. How did you work with each of them and what kind of role did they play? And how did this way of working inform the final production?

Emma> This was my favourite part of the production, meeting with the contributors and learning about everything that they have done and do for the world. To talk to them was so inspiring and wonderful and it really made me, sometimes quite a cynic, very excited for the future. I talked to them about how they would like to see the world, what they would like to change, their ideals and dreams, and applied this into the world we were creating around them.
Malika> Lots and lots of Zoom calls. We asked each of them how they reimagined the future and how they saw technology playing a role. From there we just had to listen to what they had to say. For Fionn it meant using technology to remove microplastics from the ocean. For Kavya it meant using technology to make learning fun and more accessible to all. And for Jacqueline and Tiana, it meant using technology to create a world where they can be anything they want.
Kate> Each of them influenced the set design, the wardrobe and the overall story. It truly was a collaborative effort between us, the contributors and Emma. We talked a lot, listened even more and worked together to create the final product.

LBB>  What was the actual shoot like? How did you navigate lockdown?

Emma> The shoot was lovely, also because I love to be on set and after weeks of being at home I was thrilled to be back on it, working with this incredible cast and crew. It was produced during the pandemic in Prague, not during lockdown though. We had an incredible team on the ground and we just got tested all the time so that in case there was a case, it could be contained quickly. It was a very professional and respectful production.
Malika> The shoot took place during lockdown [in San Francisco]. While our talent and crew were shot in Prague, the creative team all tuned in over Zoom in San Francisco.
Kate> Safety for the cast and crew was the top priority throughout. The time difference was tough - we essentially gave ourselves jet lag in order to get on Prague time - but in the end it was worth it.

LBB> New Radicals' You Get What You Give is such a banger. I remember hearing in my mum's car as a kid! What are your thoughts on the remake for this spot?

Emma> Same, it’s such a throwback and because of that it has a lot of feeling with it. In doing the remake we were looking for a balance where there was space for the emotional world of the characters but still keeping it upbeat and powerful.

LBB> There’s obviously additional meaning to the spot with Kamala Harris’s appointment as United States VP. Was this ever a factor during the creative process? Or was it somewhat of a happy accident? What are your thoughts on it in hindsight?

Malika> We started talking to Tiana, and she introduced us to Jacqueline. They’re both such impressive young women. They’ve done so much in such a short amount of time, but they still have so many goals and aspirations for the future.
Kate> After one of our phone calls with them, Malika and I were saying that they could run the country one day, and that’s when we knew how we wanted to end the film. We discussed the idea with Tiana and Jacqueline, and they loved it. At that time, president-elect Joe Biden hadn’t asked Kamala Harris to be his vice president yet. But once he did, we knew the end scene had the potential to have an even more significant meaning than it already did.
Emma> Yeah, in hindsight it is of course incredibly wonderful that we can watch the spot in a celebratory kind of way. The thought during making was not specifically on Kamala, but on all the women that are breaking ceilings in Washington and politics in other places. AOC, Stacey Abrams, Ilhan Omar. And of course our contributors Jacqueline and Tiana, who are mobilising, inspiring, thinking critically and making change.

LBB> What were the trickiest components, and how did you overcome them?

Kate> Being on the other side of the world while the film was in production was definitely tricky, but like we said, we trusted Emma; we trusted our contributors; and we trusted the process to get us to what you see today.
Emma> I guess as always on set it’s time, it’s a race against the clock always and you have to drag me off set because I will always find more things to shoot. But overall it was a pretty smooth production!

Malika> The best part of making this film was learning about our contributors. They’ve inspired the team in so many ways. It feels cliché to say, but it feels like we became a family throughout the process of working together, and we can’t wait to see what they’ll do in the future.