The six-part web series from Playtime writer and director Tom Slater encourages viewers to examine their own behaviours and, for men especially, learn to be more communicative with their friends 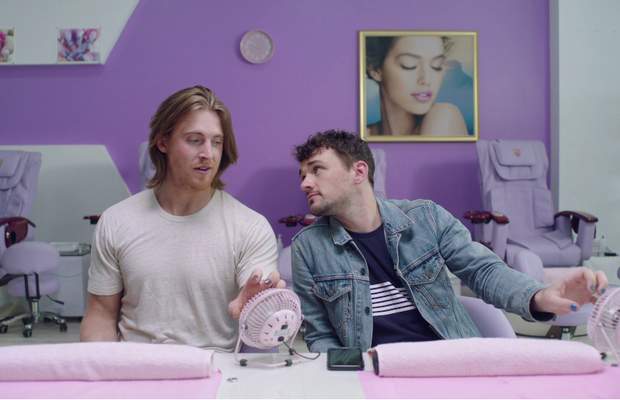 Writer and director Tom Slater has just released 'SEXY NAILS', a six-part web series in which two guys talk life, the universe and lacquer over their monthly manicure. At turns joyful and savage, this is a comedy about being married, being single and being best friends.

The series focuses on Sam and Luca, best friends in their early 30s who start meeting once a month to have manicures. Sam is married and Luca is single and together they relive all of the glories and failures of their romantic lives and try to make sense of it all. Relatable, exuberant and at times a little controversial, 'SEXY NAILS' is a journey into the world of masculinity and male friendships that breaks down stodgy ideas of gender norms while celebrating the best and worst parts of being a man. The show encourages viewers to examine their own behaviours and, for men especially, learn to be more communicative with their friends.

Over the course of six 6 - 10min episodes, the boys explore ideal wedding playlists, racist dads, the failings of Ed Sheeran, peeing in the shower, the difference between lilac and lavender and the perils of gluten-free pasta.

Tom Slater commented: “I wrote 'SEXY NAILS' because my friend and I got our nails done and sat there for 30 minutes trying to make each other laugh. It’s a really juicy way to explore male friendships in a context we haven’t seen before; two straight guys getting manicures is an excuse to get vulnerable."

Tom continued: "It gives us license to open up and dig into the knotty emotional stuff that men sometimes don’t feel comfortable talking about. It’s also incredibly silly – because, let’s face it, men are silly as hell. Sexy Nails is a forum to portray, represent, examine and challenge modern man-ness through these two best mates, who are clueless most of the time, but mostly trying their best.”