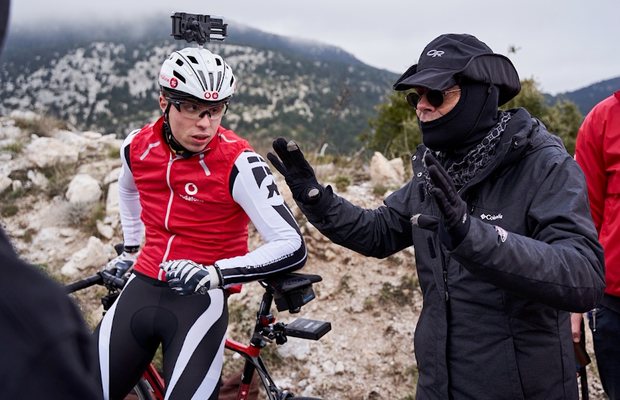 Can a blind man race his bicycle alone down a curve-filled mountain road? You bet, if he’s being monitored via the instantaneous communication offered by Vodafone’s 5G. In a new spot and short film directed by Harry Patramanis of CoMPANY Films, the state-of-the-art Vodafone Giga Network 5G helped champion tandem cyclist, Christos Sandalakis, do what seemed impossible; ride by himself. The work for Vodafone was produced for agency Wunderman Thompson in Athens.

The idea of an almost blind cyclist (Christos has lost 99% of his eyesight) speeding down a mountain road assisted via a 5G Vodafone connection was a challenge that Harry readily accepted.

“It was essential to gain Christos’ trust and get him used to my cameras being so close,” said Harry. “I spent some time at his home, filming him work through his day; waking up, training indoors, being with his bike and then to the velodrome to work out with his tandem partner, Sotiris.”

Harry wanted to capture Christos going down the mountain, helped this time not by his tandem partner, but by the 'pilot' in a control booth

“My idea was to capture Christo’s path, in parallel with the control room (where the instructions were given), to experience the thrill and tension on both sides." said Harry. "First we chose a location on the mountain that had almost no signal from any network, setting up our own 5G antenna. The signal path had to be visible in its entirety from the antenna, keeping the signal strong for the entire three miles stretch Christos would cover. We wanted to feature some exciting curves going downhill so Christos could get up some speed. Our goal was for him to feel that same sense of velocity alone that he experiences in a velodrome. That meant going downhill at 50 miles per hour.”

Capturing and controlling the action was simple. A 5G phone was installed on Christo’s helmet and the phone camera transmitted picture to the control room where the 'pilot' watched the monitor, giving real-time instructions.

“The 5G network is not only super fast but extremely responsive which was needed for the super quick reactions that Christos had to perform,” explained Harry. “I shot all the angles using ten cameras plus one drone. The day of the shoot Christos was able to do the route a few times, each time better than the first. He was so thrilled being by himself on the bike, he wanted it to last forever! It was a great joy to accomplish this project.”