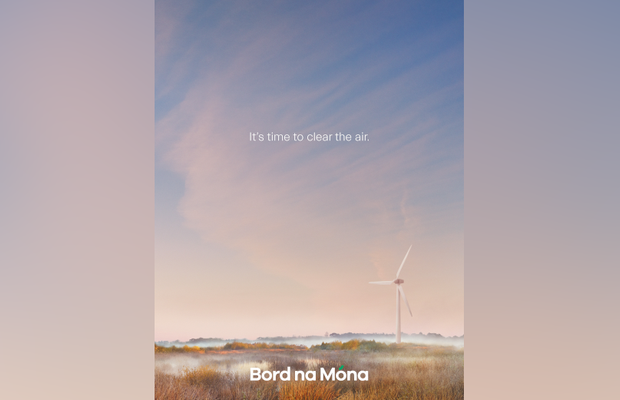 It’s always been said that action speaks louder than words, and that’s the creative insight that’s leading Bord na Móna’s rebrand campaign. Working with Dublin creative agency The Public House, Bord na Móna wanted to make a bold and proud statement about the dramatic change they’ve been making as a company, and their 'brown to green' shift, as they look to lead Ireland’s aggressive climate action targets and goal to become a carbon neutral country by 2050.

Leading with TV supported by press, radio and digital, the campaign 'Sometimes big change happens quietly' draws attention to the fact that Bord na Móna has rolled up their sleeves and made some important green commitments and transitions as a company — most notably ending peat harvesting, restoring peatlands and shifting to renewable sources such as wind and biomass.

The agency collaborated with director Alan Masferrer and Antidote to bring the launch TV to life. It features a day in the life of Bord na Móna, portrayed with subdued sound design, accompanied by a rotational camera technique that reveals itself at the end as the rotating blades of a Bord na Móna wind turbine. 'Big change sometimes happens quietly' leads us into the tangible actions that are underway. Press and digital uses the impactful headline 'It’s time to clear the air' — a statement of ambition and commitment to providing Ireland with sustainable energy and restored peatlands to capture carbon.

Pat Sammon, external communications manager at Bord na Móna, commented: “Bord na Móna is an iconic Irish company with a new, exciting purpose. We are now focused on helping Ireland reach net zero emissions by 2050. Over the last number of years we have transformed our business, making significant investments in renewable energy, peatland restoration, waste management, boosting biodiversity and other sustainable activities. This campaign perfectly captures the critical new role of Bord na Móna as a leader in Ireland’s journey to reaching our 2050 climate action targets.”

According to Jarrod Banadyga, creative director at The Public House: “The more we looked at Bord na Móna’s journey, the more we saw a dynamic and committed company with a “less talk, more action” ethos that needed to be brought to life creatively. They had a shared creative  ambition and wanted a campaign that stood out in its style and simplicity.”

Media buying for the campaign was handled by Carat. Nuria Roldan, account director at Carat, commented “Carat Ireland is delighted to be part of Bord na Móna rebrand campaign. Our aim is to drive awareness of BNM’s new role as a climate action leader through emotional engagement with strategically placed media. We are using large broadcast media to get our message to everyone followed by digital channels and partnerships to deepen the engagement. It is a pleasure and a privilege to be part of such an important campaign aligned to the climate action program for Ireland”.

The campaign for The Public House continues a successful year with the growing independent creative agency’s clients include EPIC: The Irish Emigration Museum, FBD and Paddy Power. The agency is known for its strategic rigour and creative edge that delivers for its clients, with a principle that ‘Boring Doesn’t Sell’.