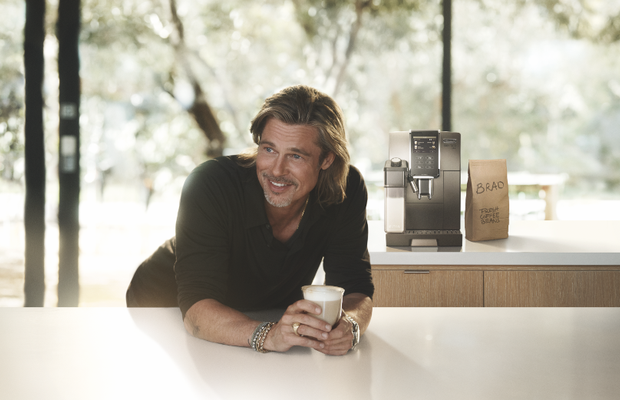 A partnership that aims for the stars, the one linking De’Longhi and M&C SAATCHI Milano, the brand’s Global Hub for over two years.

After three campaigns that reached about 20 countries between Europe and Asia, on the 2nd September 2021 the first truly global campaign for De’ Longhi will be launched, at the same time across all digital formats and then on TV worldwide, revealing the new and prestigious Brand Ambassador, straight from Hollywood: Mr. Brad Pitt.

A campaign that speaks the language of authenticity and tells us about a day-in-the-life of our protagonist in the unmistakeable frame of the city of Los Angeles: from his purchase of fresh coffee beans in the morning until his much desired return home, the moment when he can finally prepare and enjoy his fresh and “Perfetto” coffee beverage thanks the impeccable execution of his De’ Longhi fully automatic coffee machine.

A campaign that owes its elegance and its cinematographic flavour also to the collaboration of a number of Oscar-winning talents: beyond the leading actor, the campaign sees the appearance of film director Damien Chazelle, the cinematographer Linus Sandgren and the music composer Justin Hurwitz – all part of the ‘La La  Land’ adventure.

The campaign’s photos were shot by the famous photographer, Lachlan Bailey.

“Being able to respect and enhance the identity of a historic, solid, family-rooted but at the same time  international company like De’Longhi, while getting the most from a superstar like Brad Pitt and a top-level  production team: this is the objective proudly reached by M&C SAATCHI Milano and the De’ Longhi team, a ‘Perfetto Team’”, says M&C SAATCHI’s CEO Carlo Noseda.

Created by Angelo Ratti and Cristina Marra under the executive creative direction of Vincenzo Gasbarro and Luca Scotto di Carlo, the campaign was shot in cooperation with Superprime in Los Angeles last March, finalized in Milan by the production company Utopia, and with its declinations it works synergically on TV, print, outdoor, digital and social (where it also had a pre-launch teaser phase) before finally reaching the points of  sale.

Mediaplus managed the media strategy and planning in over 30 countries, in both Europe and the Asian-Pacific  Region, while Wavemaker handles South Africa, China and the USA and Fusion 5 takes care of the Emirates/Dubai.