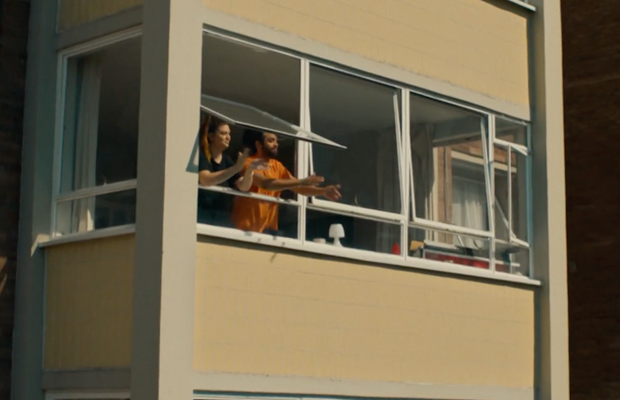 To help bring people together around the weekly ‘BBC’s Great British Sing-A-Long’ on BBC Sounds and BBC Radio stations, BBC Creative has produced a new film, showing the British public’s resilience and spirit despite the Covid-19 pandemic we are currently living in.
The film depicts ordinary people in a block of flats in lockdown singing and dancing together in unison to David Bowie’s 1977 record ‘Heroes’. The film comes to a crescendo with the classic lyric “we can be heroes, just for one day”, letting listeners know how they can get involved.
Lambros Charalambous, creative head at BBC Sounds said: “The BBC’s Great British singalong has quickly become one of the nation’s favourite ways to stay connected and in good spirits during lockdown. And in true British style it is done with gusto and a total disregard for melody. We wanted to capture the spirit of togetherness it generated but in a way that felt befitting of its scale. Step in a tower block and its residents, a camera crew consisting of drones, and a legendary song butchered in the spirit of togetherness.”
Claire Jullien, portfolio head of marketing, BBC Sounds added: “This film is part of the BBC’s mission in #BringingUsCloser. The campaign helps underpin the critical role the BBC is playing during this time by offering our listeners companionship, entertainment and a sense of connection.”
Previous pieces of work in this campaign have included films promoting the work of the BBC’s educational programme ‘Bitesize Daily’, a poem by John G Whittier read out by actor and star of BBC drama Luther, Idris Elba and a group of BBC News presenters joining forces to tell audiences ‘one day’ this will all be over.
Join the BBC’s Great British Sing-A-Long every Thursday at 9am on BBC’s pop Radio stations (Radio 1, Radio 1Xtra, Radio 2, Radio 6 Music and BBC Asian Network) and BBC Sounds.