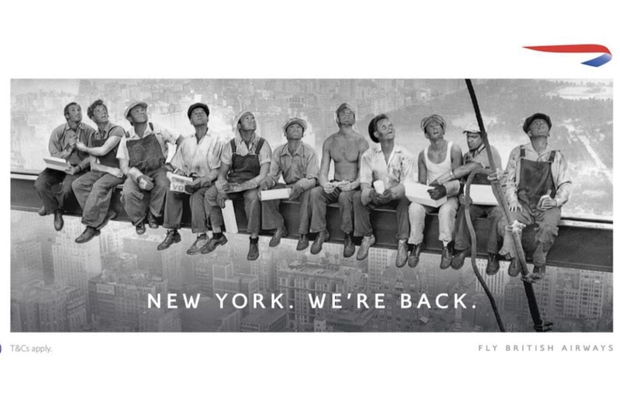 After an 18-month separation, the announcement of the re-opening of the transatlantic corridor to UK travellers, once again reuniting the UK and the US was always going to be historic news, and especially for British Airways, which operates the most flights of any UK carrier across the Atlantic. To mark this moment, British Airways and WPP collaborated to reproduce an iconic image for an iconic route and brand.

The creative teams felt that after the longest period of absence in the airline’s history, it was vital to capture the excitement of British Airways’ flights returning to the skies above New York, the airline’s most frequent route between the UK and the US. In the iconic photograph, Lunch atop a Skyscraper, it appears as if the construction workers have been frozen in time, waiting for a momentous moment to wake them up. With painstaking work these 11 men, trapped in a photo since 1932, were awakened. Photographer Adam Hinton paid incredible attention to detail in matching the original image, while portraying the construction workers looking up to the sky to see the return of our nation’s flag carrier.

The ‘We’re back’ campaign is much bigger than just the re-opening of one route to one country, however special that relationship may be. British Airways is part of the fabric of British society. It carries more than travellers. It carries the hopes of a nation post-pandemic. We're back.

Jules Chalkley, Chief ECD: “British Airways is back. It doesn’t get any bigger or more iconic than the route to New York and the USA reopening –  it’s fantastic news after such a long wait to fly and we wanted to re-create an iconic image to match.”

Ogilvy UK Webinar: Influence Trends You Should Care About in 2022