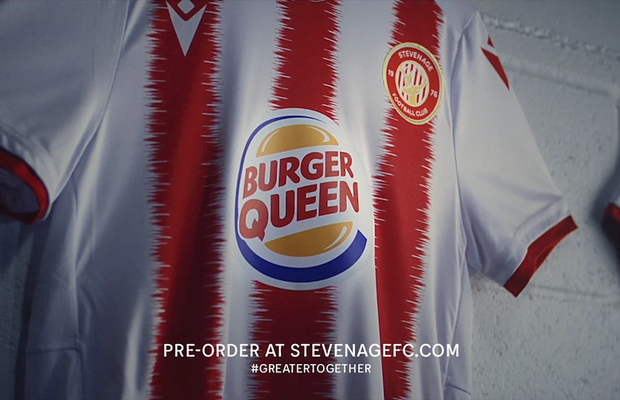 Last year, Burger King announced it was sponsoring League Two English football club Stevenage FC with the mission to turn the team into the biggest club in the online gaming world.
Now, the ‘home of the Whopper’ wants to extend this goal to the club’s women’s team, sponsoring Stevenage FC Women on the same terms and at the same level as the men’s team.
Working with David Madrid, Burger King has created the Burger Queen logo as part of the sponsorship. The new logo will be proudly displayed across the team’s kit throughout the 2020/2021 season.
Outsider director Tom Day has helmed a film to support the announcement, and the Sevenage Burger King has even been rebranded to become the world’s only Burger Queen restaurant.
Fans can purchase the limited-edition Burger Queen kit from the official Stevenage FC store at stevenagefcshop.com.
“After successfully spotlighting the talent of the Stevenage FC men’s team last year, we wanted to do the same for the women’s team in 2020,” said Soco Nunez, marketing director of Burger King UK. "The women’s team faces the same challenges and hurdles as the men’s team and it’s only fair that it receive the same support from our brand with an equal sponsorship.”
“We are thrilled to be continuing our partnership with Burger King and the support that the brand is showing for the women’s team is unmatched,” said Stevenage FC CEO Alex Tunbridge. “The sponsorship from Burger King® will be used to help grow the women’s program and support the team.”
Pre-order your Burger Queen Shirt now by vising www.stevenagefcshop.com.

Title: Stevenage VS Everything