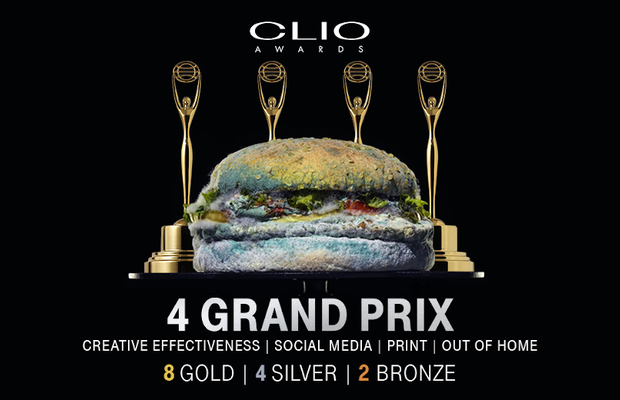 This year, the Publicis Groupe Romania agency is one of the only two creative agencies from the Central & Eastern Europe region recognised at the Clio Awards.

Speaking about the latest recognition on the Moldy Whopper work, Jorg Riommi, chief creative officer of Publicis Groupe Central & Eastern Europe said: “Adding four Grand Prix to the count of gold awards and other metals for this campaign is a further prove of its extended impact on the industry and a statement of the power of this collaboration. I want to extend a warm thank you and well done to all the team involved in this at Publicis Romania, Publicis Spain, Publicis Worldwide, Ingo Stockholm and David Miami, as every partner was key to bring this piece of work to where it is now and where it will be in advertising history. Incredibly proud and happy to be part of it.”

In addition to the Clio Awards, the campaign has been widely recognised for its striking creativity and craft winning a total of 79 awards at leading global and regional creative awards competition including D&AD (10 Pencils including the coveted Black Pencil), Andy’s (three Golds and one Bravest), The One Show (28 awards including four Grand Prix), Luerzer’s Archive (six Golds), Epica (three awards), Gerety Awards (one award) and Eurobest (eight awards including six Grand Prix).

The Moldy Whopper campaign zeroes in on Burger King’s stance to use fresh ingredients by showing that like real food, their whoppers get moldy over the course of 34 days - an uncommon practice in the fast food industry. From the bun to the freshly-sliced onions, tomatoes and lettuce, and the 100% beef patty,  the striking images show the real mold that grows on every part of the iconic burger. The groundbreaking campaign makes a reference to the number of days that have passed since the sandwich was prepared, with a copy that reads, “The beauty of no artificial preservatives”.

Founded in 1959 to honour excellence in advertising, the Clio Awards today celebrates bold work that propels the advertising industry forward, inspires a competitive marketplace of ideas and fosters meaningful connections within the creative community.

Annually, The Clio Awards brings together leading creative talent for an exclusive and collaborative judging experience to select the entries that will win the coveted Grand, Gold, Silver and Bronze Clio statues.

Telekom Highlights Online Threats to Kids with The Online Park