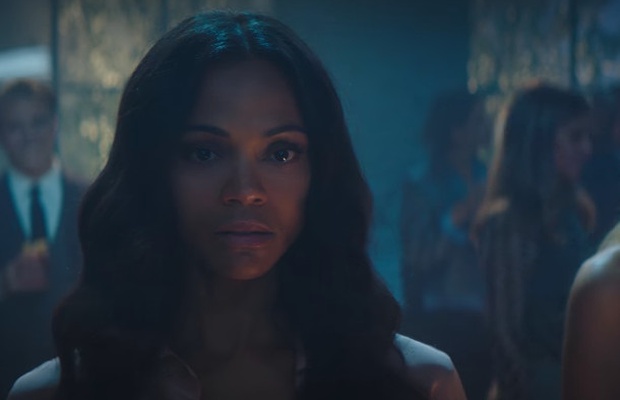 Just over a year ago Campari took a left turn with its marketing strategy, launching the Campari Red Diaries - a series of stories bringing to life the ethos that “every cocktail tells a story.” The centrepiece of the campaign was a decadent short film, ‘Killer in Red’ directed by Paolo Sorrentino and starring Hollywood actor, Clive Owen. It was a bold move into the world of branded entertainment that paid off. Its noir delights earned almost a million views on the English-language version alone.
This year the alcohol brand is back with an equally spectacular slice of filmmaking - ‘The Legend of Red Hand’. A tense, sumptuous thriller, starring Zoe Saldana and Adriano Giannini and directed by Stefano Sollima, the 15-minute tale is full of intrigue, tension and (of course) cocktails.
After its glamorous premiere in Milan last week, LBB’s Alex Reeves sat down with Campari’s Managing Director for Italian Icons & Gin, Andrea Neri, and the creative team from J. Walter Thompson Milan, to find out their thinking as they embarked on this massive project.
LBB> How does this year's film follow on from last year’s movie, 'Killer in Red'?
Andrea Neri, Managing Director, Italian Icons & Gin, Campari Group> The evolution of this year’s campaign comes through the celebration of exquisite bartending and the many Red Hands from around the world, featuring exclusive cameos from six of the world’s best bartenders. Not only this, but some truly talented influencers, forming the so-called Campari Collective, have been involved in the project from the very beginning. A first of its kind for both Campari and director of ‘The Legend of Red Hand’, Stefano Sollima, Campari Collective saw the coming together of four global influencers to be part of the film production.
LBB> Strategically, why is this kind of glamorous short film the right approach for Campari, rather than, say, a 30-second TVC or an outdoor campaign?
AN> Launched in 2017, Campari Red Diaries represents a step-change in Campari’s communication. A 360o holistic campaign, with a short movie at the heart, Campari Red Diaries brings to life Campari’s ethos that “every cocktail tells a story”
Using short film as a vehicle for the first time to channel the contemporary edge and versatility which has been key to the brand’s success. Each year we like to breathe fresh life into our communication to engage and inspire fans of the brand year-on-year, while also remaining true to the brand.
LBB> What was the original idea at the beginning of this project? And how did it develop?
Creative Team, J. Walter Thompson Milan> The ingredients were: a mysterious bartender called Red Hand, an intriguing photographer called Mia Parc, an Italian waiter named Davide, the pursuit of the perfect cocktail from Milan to the rest of the world, a surprise ending. Stefano Sollima, as a great bartender, mixed all these elements and ‘The Legend of Red Hand’ was born.
LBB> Why did you decide Stefano Sollima was the right director for the job?
AN> Famed for his work with short episode formats such as this, as well as his world famous longer form creations, Stefano Sollima was the perfect choice to represent and portray the story of ‘The Legend of Red Hand’. As a famous Italian director, Stefano was able to get under the skin of the brand to truly tell the story within the genre it required.
LBB> Why were Zoe Saldana and Adriano Giannini the right actors for this project?
AN> Zoe Saldana is a world-class actress with an extensive background in film and an inspiring talent that allowed us to create a complex character who was portrayed perfectly. Zoe exudes effortless glamour and style that complemented the character and the brand beautifully. The role of Davide in ‘The Legend of Red Hand’ required the actor to portray a deep, mysterious character who could also reflect Campari’s Italian heritage. As a well-known Italian actor, we felt that Adriano Giannini fitted the role perfectly, and the on-set chemistry between Zoe and Adriano was exactly what we required.
LBB> The importance of the gloved hand and the general atmosphere of the film is reminiscent of Dario Argento's giallo films. Was that a big influence and why was that the right fit for the idea?
JWT> The work of Dario Argento has been a big influence for the storytelling, the challenge was to make an original noir bringing to life the charismatic and intriguing ethos of Campari.
LBB> What else inspired the legend and story?
JWT> ‘Das Parfum’, the novel by Patrick Süskind that tells the story of the best perfumer in the world and his pursuit of the best perfume ever.
In the pop culture, Banksy and Daft Punk have been other references for us: they are legendary - like Red Hand - because they don't reveal their identities.
LBB> How do you hope people will react to the film?
AN> With names like Zoe Saldana, Stefano Sollima and Adriano Giannini, all having integral roles at telling our story, we are excited to bring you on our journey to discover ‘The Legend of Red Hand’ and we hope that this story we will inspire people around the world to go on their own personal quests in the hunt for cocktail perfection to find their own Red Hand.