Operation Black Vote exposes bigoted politicians, Tide cleans up laundry night and Billie Eilish empowers a generation – but what other creative campaigns does the network’s leaders have high hopes for? 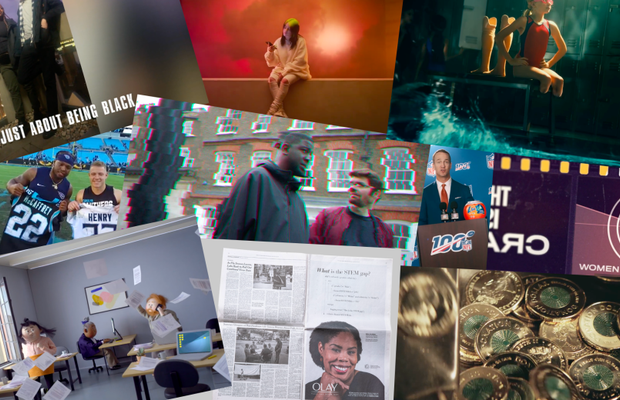 Saatchi & Saatchi has been putting purpose at the centre of its work, creating ambitious campaigns designed to mobilise people around deep social issues. A provocative campaign that puts politicians’ own prejudicial words in the mouths of actors and young people. A deadpan comedic animation that reveals a far-from funny penalty facing working mothers. An innovative print campaign that uses code to challenge stereotypes and support women in STEM. An undertaking to mint a whole new coin to encourage increased charitable giving. Creative leaders across the network share the work that has been inspiring them.

Saatchi & Saatchi Australia
Steve Cochran, CCO New Zealand says: “There are many reasons why this project should never have happened. It’s way too hard and complicated. For starters you’re talking about getting the Australian government and Royal Mint on board. But they did. It must be one of the best examples of Nothing is Impossible in Saatchi & Saatchi history. So, on that basis, I reckon it’s quite good.”

Women in Film: For Your Consideration

Saatchi & Saatchi NY
Steve Cochran, CCO New Zealand: “We’ve also recently worked a project promoting the consideration of women in the creative industry. So have had many first-hand conversations around the unconscious bias, underrepresentation and the challenges women face. This campaign is a brilliantly disarming but relevant way to influence an audience that can make a difference. But even more than that, it’s wonderfully crafted as well. Inspiring on all levels.”

Saatchi & Saatchi NY
Kate Stanners, CCO Worldwide says: “The pandemic meant that many brands had to adapt in real time. Tide, with its long running partnership with the NFL, recognised that one of the great traditions of the game was under threat. The jersey swap. This campaign used that insight , and the launch of a new anti-bacterial product, to create a seamless campaign that ran in multiple formats . It’s popularity with players led to long format content , enjoyed by all audiences , from fans to players.”
This campaign demonstrates what a true brand partnership is, a masterclass for us all

Saatchi & Saatchi NY
Komal Bedi Sohal, CCO Dubai says: “An intelligent and stereotype-breaking campaign that takes on so many issues so effortlessly. Hats off to the brave client and the creative team for disrupting the beauty category that objectifies women and sets impossible standards.”

Saatchi & Saatchi NZ
Mike Spirkovski, CCO Australia says: “In a sea of overcomplicated ideas and executions the Career limiting campaign really stood out for its simplicity, and in particular the beautiful use of craft. It’s a highly engaging campaign for a serious issue which needs to be told and rectified.”

Saatchi & Saatchi LA
Kate Stanners, CCO Worldwide, says: “Part of Toyotas sponsorship of the para Olympics ,this film tells its emotional story of the determination and achievement of a swimmer who overcomes their extreme disability .With  a wonderful mix of surrealism and authenticity, it perfectly demonstrates the power of film making .The mastery of the directing takes you on real life narrative , in a visually memorable way.”

Deutsche Telekom: What we do next?

Saatchi & Saatchi London
Mike Spirkovski, CCO Australia, says: “One of my favourite films of the year and where all the mediums come together so seamlessly. The use of Billy Eilish and her track was perfect and the Direction and cinematography all class. I also found the overall message very empowering for the generation Telekom was supporting.”

Saatchi & Saatchi London
Komal Bedi Sohal, CCO Dubai says: “I was offended when I saw this film for the first time. I could not believe they were saying what they were saying! And that’s what makes this particular piece so strong.”

Saatchi & Saatchi NY
Jason Schragger, CCO LA says: “In the middle of a crazy year, this was a genius way to align a product truth and an incredibly passionate audience. The entire event could have been just a simple logo or media partnership, but the executions depth and craft made it resonate in such a brilliant way and made it unmissable.”

Direct Line Film on 4 Idents from Franki Goodwin on Vimeo.

Kate Stanners, CCO Worldwide says: “This is a brilliant example of the ident format. A perfect fit with the sponsorship, in this case movie season. Building on the brand’s equity as a “fixer” the insurance company Direct line focuses on the call centre. Brilliantly performed moments that relate directly with the film that is being showcased. It is pitch perfect, giving the film buff audience a satisfactory sense of knowledge when they work out who is on the other end of the line.”