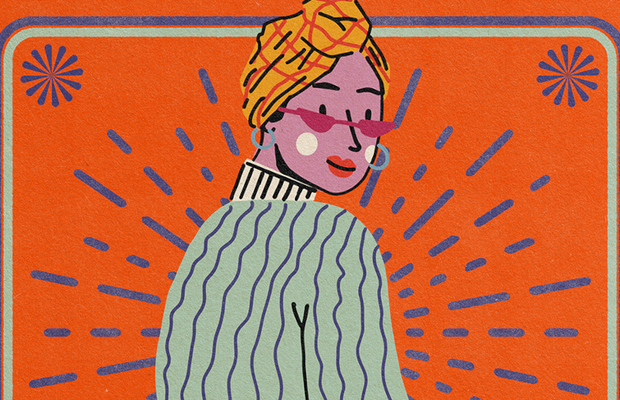 Indonesian feminine care brand iFree have long been pioneers in the market with heat pads that aim to ‘set every woman free from their menstrual cramps so they can always be on the move and do what they have or need to do without being bothered by menstrual cramps.’ Now, they’ve taken that one step further by working with MullenLowe Lintas Indonesia on the #WeGotYourBack campaign that aims to tackle the patriarchal problems women face.
The social media campaign was launched on International Women’s Day and showcases 14 pieces of art celebrating the unique and diverse personalities of Indonesia’s females. Each image celebrates a woman’s identity, whether she be a hijab wearer, music player, tattooed, have a deeper skin tone – and so much more.
The agency’s associate account director, Ezra Gabrielle Febriemma, senior account executive Nada Salsabila, strategic planner Putu Dea Kartika Putra, social media strategist Ditya Pertiwi, creative group head Prilidanti Oktarizkia and senior copywriter Amira Hapsari speak to LBB’s Natasha Patel about the aims to support and celebrate women and how they managed to appeal to such a diverse audience through social media.

LBB> Where did the idea for this project come from?

Dea> We actually didn’t get any brief for this project; it was our agency’s initiative, to support iFree and its consumers - the women of Indonesia. The idea for this campaign was sparked by viral instances in social media, where women had been putting down other women for various reasons, such as preparing meals for her husband, or choosing to dress a certain way. We realised that unfortunately, each one of us had witnessed, or even fallen victim to this internalised misogyny. This is a universal ‘pain’ for women that we believe iFree could help address and relieve.

LBB> The campaign was originally launched on IWD - why was this the right time to launch #WeGotYourBack?

Prilidanti> Now is the right time to put a spotlight on this issue, as the cause gets more and more alarming but somehow always overlooked in Indonesia. Internalised misogyny is tiny in size, yet surprisingly restricts, and backfires to other big women’s movements.
Thus, we decided to join this global celebration to highlight this deeply personal problem with a hope to stir some desire to change this behaviour, and spark a real movement in the long run. We want all girls to start with simple baby steps of respecting other girls’ choices. And it’s okay! Baby step is one step ahead. Let’s collectively put ourselves into actions that hopefully may transform our own way of thinking, and society in the long run.

LBB> How did the actual messages come about? Did you speak to women to find out what they were thinking and what they wanted to say but couldn't?

Prilidanti> This campaign aims to celebrate the diversity and complexity of our own selves as women. This complexity is what makes womanhood colourful and beautiful, and we should always opt to coexist with every other girl’s choice and preference. So jobs to be done here are not to judge, and just coexist. No girls are better than other girls.
Tiwi> WeGotYourBack is all about how to respect and support the choices and opinions of fellow women, because it turns out there are still so many women’s choices or opinions that often other women underestimate. Whereas they only want to be themselves, choose what they like, and want to be happy. This makes some of us become scared or hesitate to choose our own path.
Amira> The message WeGotYourBack as a support for fellow women was sparked when we watched social media today. There are many cases where women often easily attack other women's opinions, choices, even appearances. We tried to dig into the social problem of why this issue keeps happening nowadays.

LBB> It's interesting that topics you touch upon are so relevant across the world today, for example there was a card related to skin colour.

Amira> Having a white skin is considered a goal to be beautiful for women who grew up in a country with the majority of women having brown coloured skin, Indonesia to be precise. On the other hand skin colour is a gift that all humans are born with. We want young Indonesian women to be proud of who they are, their skin colour. You do not have to have white skin to be beautiful and proud to be yourselves.

LBB> What has the response been from the public from the images?

Tiwi> We made 14 personalities of women, each with their own interests, hobbies, and ways to be themselves that are relevant to what happens to many women in Indonesia. The engagement rate of all the personality posts turns out equally shared by our followers on their own social media; there is no single personality left unshared. They even add their own emotional short stories of how they relate to the selected personality and tag their friends who have different interests and personalities. We’re so happy that they feel represented by our posts.
Moreover, coupled with very interesting visual content and the addition of audio on each personality makes the audience even more triggered to share on their Insta Stories.

LBB> There's a piece of artwork for everyone and I love it! How and why did you manage to speak to so many different audiences?

Prilidanti> While making this, we do speak to many women and do quite a bit of research to make the posts relevant and triggering. Plus, we are a team of six girls with different age groups, from Gen X to Gen Z, so we more or less know how it feels to be hated by other girls throughout the era. Ah, the pain… hahaha
Tiwi> We talked with many friends, relatives, and family about how they express themselves to the world. Also, we looked for topics that have been, or are currently being discussed on the subject of “girls supporting girls” on social media.
Amira> The various female characters that we have adopted for this campaign represent the current issues. The research methods that we have conducted are from social media threads and face to face interviews on women in our proximity. We hope this message will resonate with many women to mutually support each other.

LBB> It's interesting that across the world, menstruation brands are speaking up for women. Why is this important to iFree?

Dea> iFree is the pioneer in the Indonesian market as a heat-therapy pad to relieve menstrual cramps. From the start, our brand core has always been about relieving women from ‘pain’, both literally and metaphorically. We are grateful for the unique opportunity to speak to Indonesian women, and spread a positive message that we hope would resonate and empower them universally.
As a country still largely dominated by patriarchal culture, women already face enough problems that infringe on our rights and freedom. This internalised misogyny just adds more fuel to the fire; it divides and tears women apart.
And so, to tackle these important issues, we believe that it’s extremely important for women to stand united, and empower each other, instead of tearing each other down for our choices - even our existence. We want to celebrate the diversity in identity of Indonesian women, because we are all unique and amazing in our own ways. As long as we’re not hurting anyone, we should be comfortable in our own skin, and respect each other’s personal decisions. This way, we aim to strengthen the bonds among women, and remind them that we shouldn’t be each other’s enemies.

LBB> What are your hopes for the future with the campaign? Is there a plan to continue it next International Women's Day?

Echa> We hope through this campaign, more women can appreciate and support each other’s life choices, even though it might be the opposite of what they believe in. Since the iFree’s brand message is about women empowerment, we for sure will continue to speak about it, especially on International Women’s Day.
Nada> Our hopes in the future are that more women can be brave to take and choose their path without being affected by any negative judgement or perspective or limitations that society has created. Yes, we hope we can continue the campaign for the next International Women's Day so we can continue to encourage women to be brave in whatever their chosen path.