After reaching out to the team in Italy, Cheil Ukraine received their own message of thanks 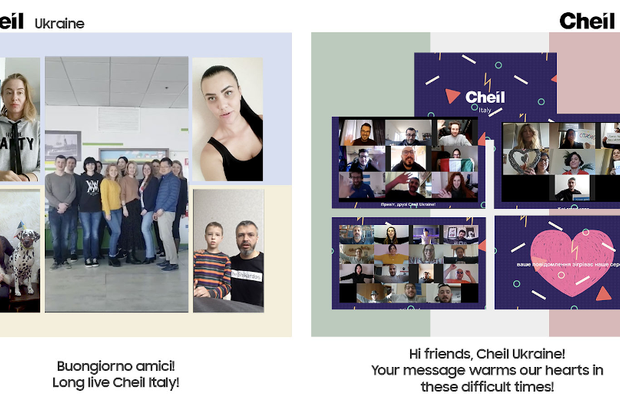 The team at Cheil Ukraine has reached out to their colleagues in Italy with a message of support as the nation faced up to an incredibly tough few months fighting the deadly coronavirus outbreak.

In a touching video filmed by Cheil Ukraine staff as they shelter in place, team members – along with assorted children and fluffy companions – share messages of support, which they’ve bravely delivered in Italian. In the video, Cheil Italia are told that ‘Cheil Ukraine is with you – long live the Italian people. We must believe and live positively!’

The team at Cheil Italia were so moved by the message – sent by people they’d never met before in real life – that they responded with their own video, this time with the Italians attempting to deliver their message of thanks in Ukranian.

The small gesture of support has created a real sense of solidarity between the two offices, with several staff saying they’d been moved to tears by the initial gesture and the response. One of the Ukranian team even vowed that their next office party should be held in Italy.

Damon Kim, president of Cheil Ukraine, said: “We kept seeing the terrible news about Covid-19 coming from Italy and even though we didn’t know anyone personally at our sister office in Milan, we wanted them to know that we were thinking of them. So with the help of Google Translate and our smartphones we put our video together. We were so touched when they responded – and in Ukranian as well! It was the most emotional message we’ve ever received from our work colleagues. Grazie Cheil Italia!”

Jun Lee, president of Cheil Italia, said: “It was overwhelming to receive the message and feel the warmth conveyed by everyone in it, we can’t thank them enough and hope that one day we’ll be able to meet in person.”

A Creative Call to Arms for International Women’s Day