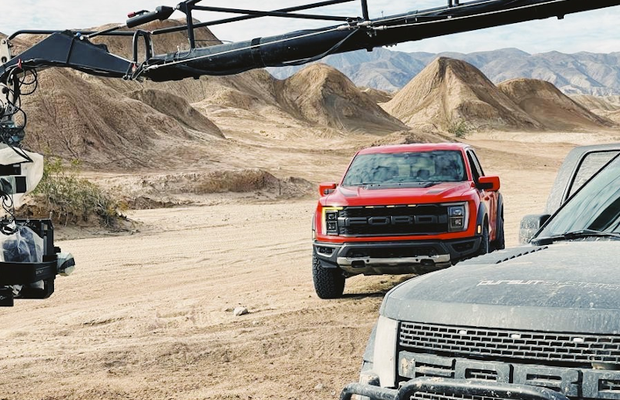 This month the Ford Motor Company revealed the much-anticipated all-new 2021 Ford F-150 Raptor – the brand’s iconic performance pick-up truck – with a jaw-dropping film that was conceived, produced, and edited by Chrome Productions. Premiering exclusively on YouTube, the 2 ½ minute film, along with its soundtrack of Metallica’s iconic 'Enter Sandman', is set to capture the attention of the motor world.

Chrome Productions has partnered with Ford on several of their recent, high-profile product reveals including the Mustang Mach-E and the ground-breaking all-electric F-150; but the commission to deliver the reveal film for the new Raptor was possibly their biggest challenge yet – with intricacies of the remote desert landscape and ample Covid-19 restrictions forcing an ambitious three-week turnaround.

“The F-150 Raptor became an instant icon in 2009 as the original Baja-bashing, segment-busting pickup, and this film helps demonstrate how we’ve ratcheted up the high-speed, off-road performance muscle and advanced technology with our latest Raptor. Chrome Productions’ vision and storytelling abilities, including their choice of soundtrack, created a heart-pounding and memorable film that exceeded expectations,” said Karl Henkel, Ford’s news and content manager. “And to do it under extreme circumstances, including dealing with Covid-19 restrictions, a desert storm, and the resulting compacted timeframe – with team members spread across the globe – is a testament to their talent and attitude.”

Directed by Scott Weintrob (Apple TV+’s Home and Netflix’s Fastest Car) alongside director of photography Khalid Mohtaseb (Uncle Frank and The Wolf Hour), the piece was filmed in the remote Southern California desert with a crew of just under 60 heads – all operating under the tightest COVID-19 restrictions – and with a full quiver of the latest production tools. Chrome Productions created a dynamic visual experience in the extreme and varied terrain by partnering with premiere off-road drivers Driven Experiences, industry-leading camera crane operators Pursuit Systems and expert drone operations from Aerial Imagery Works. The production used photosonics to capture incredible detail, employed bespoke, adapted racing drones for unique points of view and included the off-road cinematographic first of mounting a camera crane onto the hero car to get unique 360° shots in the wild. To meet the compressed timeline, Chrome Productions stretched daylight by activating its global team in both Los Angeles and London to marry a US production with a nearly simultaneous edit in the U.K.

“To deliver such an exciting piece of work for Ford in such a short space of time is testament to the organization and talent we have created at Chrome Productions over the past 15 years.”, said Joel Mishcon, CEO of Chrome Productions. “In addition, we are incredibly grateful to Ford for giving us the opportunity to demonstrate our ability to deliver bespoke, creative advertising content, and to Metallica who entrusted us with “Enter Sandman” – an iconic song that has only once before been licensed for a commercial campaign. The global team is looking forward to seeing this incredible film across multiple platforms.