The film laboratory manager received the the PGGB innovation award for an individual, sponsored by Netflix 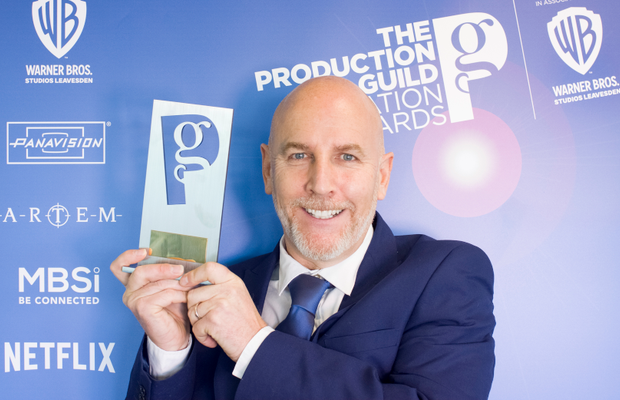 The Production Guild of Great Britain (PGGB) have announced the winners of the 2020 PGGB Innovation Awards, in association with Warner Bros. Studios Leavesden.

These awards recognise the innovative work of production professionals who have navigated new ways of working to keep UK film and TV production moving forward during lockdown. The awards celebrate the achievements of PGGB members working in Film and High End TV in the fields of the production office, accounts, locations, assistant directing, post production or VFX, who have shown exceptional resilience and resourcefulness in the face of the Covid-19 pandemic since March 2020.

Andy Hudson, film laboratory manager at Cinelab London, receives the PGGB Innovation Award for an Individual, sponsored by Netflix. Known as a ‘Film Superhero’ by his team, Andy ensured the Laboratory could stay open despite almost all of its 28 employees having to work from home when lockdown hit. Drawing on his 25 years’ experience in the film industry, Andy took on all of the physical film lab work that could not be done remotely, continuing to deliver a high quality service which led to the company receiving hundreds of projects from clients around the world. Bringing a host of talents to the table, Andy implemented new working guidelines, whilst rostering work and also keeping staff updated and personally checking in on vulnerable team members at home.

Jury Chair, producer Jo Burn says: “Andy went above and beyond, demonstrating extreme dedication and selflessness in keeping the laboratory running virtually single-handedly, whilst keeping a positive attitude and finding solutions. Delivery of rushes plays a pivotal role in the filmmaking process and Andy’s work helped keep this vital stage moving. On top of this, he personally checked in on colleagues to check on their wellbeing. Well done Andy, you thoroughly deserve this award.”

Andy Hudson says: “We knew it was going to be tough. All Productions had ceased, there was no work coming through the door. We had archive projects to deliver, but It meant going back to my roots to get more involved in the physical processing side, working in the dark room, chemical mixing, using the processors, admin, despatching, anything to safely get the rushes through the Lab. As the weeks went by, the workload picked up, work being sent to us from around the world, and we’re now back to full strength. This award is a great recognition. A big thanks to everyone that works at the Lab, this is for all of us.”

Four Awards were presented in the online ceremony which are now available to watch on the PGGB YouTube channel.