Cinematographers Behind the Camera: Marcel Zyskind 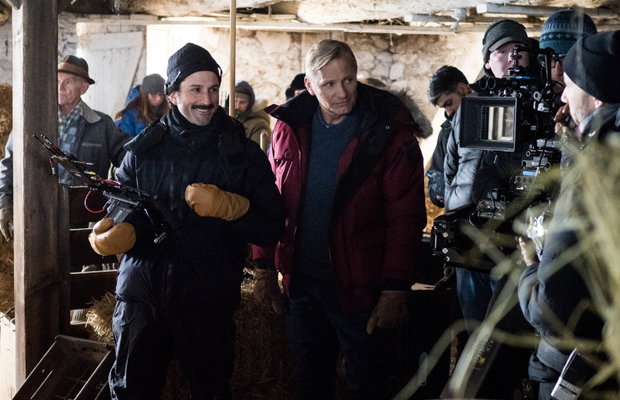 As part of Cinelab London’s series of Cinematographers Behind the Camera, we delve into the creative minds of some of the industry’s top talents to find out what inspires them, their greatest achievements and how they got to where they are.
In this interview, we speak with Danish DoP Marcel Zyskind, known for his successful collaborations with British director Michael Winterbottom, including the harrowing people-smuggling drama ‘In This World’ and feature documentaries ‘A Mighty Heart’ and ‘The Road to Guantanamo'.
As well as his feature films, Marcel has worked on a number of music videos for likes of Massive Attack, and commercials for brands such as Lexus, IKEA, AirBnb, Audi, Guinness and the NHS.

LBB> How did you first become interested in the industry?

Marcel Zyskind> I think my interest first started in school when our teacher took us to the cinema a couple of times. On the first trip we went to watch Disney’s Aladdin and on the second we watched Schindler's List - which was quite the contrast - and I realised what a wonderful medium film is. I loved Back to the Future and Superman, films that help you escape reality. So I begged my mum to buy me a camera and I just started taking stills from there.
When I was 16, and I'd finished elementary school to start high school in Denmark, I didn't really get along very well with the education system. I decided to take a film course instead and met some people who were in the post production and TV industry who offered me an internship. Six months later, I started working as a camera assistant for free at another production house, made some more contacts, and eventually got some bigger roles.

LBB> What do you love most about being a cinematographer?

Marcel> It's a privilege to work with something that you are interested in and that you see as a hobby or a passion. It comes with many challenges but it forces you into thinking differently to find solutions. I really love working with directors who have a vision and who have an idea of where they want to go.

LBB> What is your favourite medium for shooting?

Marcel> Well, I've always admired film - it had a really romantic imprint on my brain in some ways. It's the medium I built by foundation on and it has an organic quality. I also find it hard to describe because it’s about the feeling it gives.
But my career really started a lot with digital which propelled me into the business. So both mediums have their strengths and their weaknesses but whenever shooting film, you just have a built in feeling that's hard to emulate with anything else.

LBB> What results do you feel that film can offer on the final look and feel of a piece over digital?

Marcel> The last film I did, which Cinelab helped me out with, was a period piece set on an 1880s rural farm. It has a very painterly feel and a candle-lit quality to it. We shot on 16mm which gives it some texture and helps you sort of transcend into that world. Digital feels a bit too modern in its look for certain projects.

LBB> How would you describe your style of filming?

Marcel> I like to be flexible in my style as a cinematographer and achieve any look needed, depending on the desire of the director and the needs of the script. But I am personally drawn to a naturalistic approach in terms of things like lighting that doesn't feel too detached from reality.

LBB> Who have been some of the most interesting people you have worked with or shot?

Marcel> I've been very, very lucky with my travels. I have travelled to Pakistan many times, to India, to China, almost everywhere! I can't put one place above the other really, because it's just a privilege to be able to travel and you realise that even more these days. Iceland is like being on a different planet, but also the deserts of Pakistan are yet another different planet. But being able to go and film on 35 mil handheld in the streets of India or making road movies with refugees from Afghanistan to London - all the experiences become part of you.
I've not been to South America very much and would love to shoot in Patagonia. But at the moment while we’re all at home, I have been shooting in Denmark - which I guess I wouldn’t have had much chance to do if I was off travelling still.

LBB> Where do you tend to draw inspiration from?

Marcel> Stills photography is always a great place to venture into - there are so many fantastic photographers throughout the ages that you can find, and it's just such a nice way to go back in time. Other times, if I’ve looked at too many film or photography references it can feel like I've eaten too much - there’s too much information in my brain and I need to unwind. In those moments I like to read.
Depending on the project that you do, you look into and research the wider subject matter. So right now I’m working on a film about Salvador Dali and I have a lot of inspiration imagery stuck up on my wall like a mood board. So I look at it as I pass by and sometimes it gives me an idea. On the other wall, is the more practical side of the brain so I have the production schedule up. As a cinematographer, not only are you thinking about the overall look but you’re in charge of choosing the right gear as well. So you need to balance both sides of the brain.

LBB> How have you been keeping busy in lockdown? Did you get much time for passion projects or hobbies outside of cinematography?

Marcel> I go riding my bike quite a lot. And I’ve picked up my own photography again which has been pushed to the side a bit over the last ten years. When you’re constantly working you can get this fatigue so when you're shooting all the time, working long days, it's kind of hard to keep up your own photography and projects.
I’ve started scanning my old negatives from way back in my travels at the beginning of my career and it’s so nice to see my old film photography again. There’s a big resurgence in film with young photographers and you can see the old film cameras are becoming very expensive again, because they're not produced anymore. Some older photographers and cinematographers like me are coming back to it again.

LBB> What advice do you have for young aspiring cinematographers?

Marcel> If you are at home and you have someone to support you, just stay there for a while until you get going. Experiment and shoot as much as possible with cameras that are accessible to you. And find inspiration that triggers you and use that as motivation to evolve yourself and always be open to new things.

Tips for Self-Shooting on Film