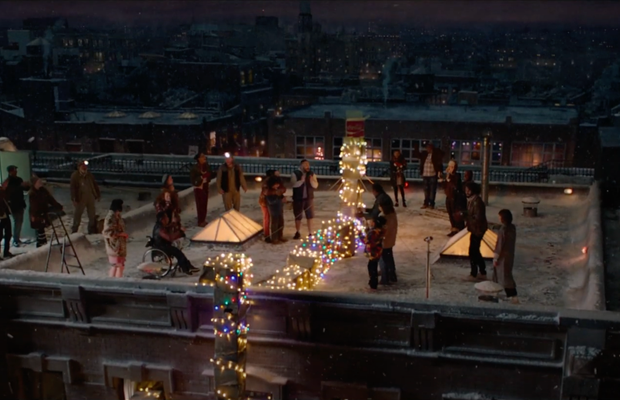 A community comes together in Coca-Cola’s global holiday campaign, created by DentsuMB and produced by Rogue. In it, a young boy living in a chimney-less apartment block, rallies his neighbours to build a cardboard chimney and to make sure that even the loneliest resident gets a taste of holiday magic.
The campaign, Real Magic at Christmas, is the latest outing under the ‘Real Magic’ banner and is a fiesta of in-camera, crafty trickery. The spot was developed by the team at dentsu mcgarrybowen, led by chief creative officer (and alumni of the adam&eveDDB John Lewis ads) Simon Lloyd. The hero film is being supported by an array of social content and digital activations.
Explaining the idea, Simon Lloyd said: "Magic is all around us, but most of the time we don’t even notice. This story is set in an apartment block in the USA, but it could be anywhere. For most people in the world, living stacked up on top of one another is a reality; so close yet still strangers. But then global pandemic also brought neighbours together like never before. With Christmas cancelled for many last year, this humble holiday story focuses on what matters: community and generosity that connects us in an imperfect world.”
The spot ends not with Santa climbing down the chimney, but with a special gift delivered to an isolated older woman who lives alone in the block. She’s invited to a huge holiday feast, complete with a giant bronze turkey and lashings of Coca-Cola - reflecting a wider theme in the brand’s advertising to associate the beverage with food and social feasting occasions.
Manolo Arroyo, Global Chief Marketing Officer at The Coca-Cola Company, said: "This is our first Christmas campaign under the new Real Magic brand philosophy for Coca-Cola. Coca-Cola has always believed in the magic of Christmas, and this year our campaign celebrates the real magic of him and connections. With a simple and uplifting message of unity, inclusion and positivity at its heart it aims to remind us that all we need for a magical Christmas is shared moments with community and the ones we love.”
As a global campaign, the story has a universal insight and the setting of a New York apartment building allows the brand to bring together multiple cultures in a snowy festive setting. However, the spot itself was shot in Budapest, Hungary.
Aptly, the film features an orchestral re-arrangement of the classic Mary Poppins song, Chim Chim Cher-ee, originally sung by Dick Van Dyke in the 1964 Disney musical. This arrangement, which starts with a cheeky clarinet, builds with lush strongs and whimsical woodwind as the story unfolds and the crafty community builds the giant cardboard chimney.
The campaign will run across 90 countries, with both the 2 1/2 minute film and cutdowns running online, on TV and in cinema. In the US and Canada, the spot will break on November 15th - and in the United States, Coca-Cola is also teaming up with Santa and Cameo to allow people to get a video message from the big man in red himself.
Beyond the film, the Real Magic at Christmas campaign features wider elements including:
Partnership with Fareshare: An on-pack ‘Win a meal, give a meal’ promotion across Coca-Cola Original Taste and Coca-Cola Zero Sugar future consumption packs, giving consumers the chance to win food related vouchers, while donating to FareShare; a charity set up to fight hunger and food waste by redistributing surplus food to frontline charities.
Hero The Driver: Celebrating Coca-Cola’s Hero the Driver campaign by partnering with one leading talent, to get behind the bar at a select Greene King pub for the day. In addition, Hero the Driver will sponsor a podcast for the day, giving those designated drivers something to listen to on their journey home.
Bringing Real Magic to life: Bringing the new Real Magic TVC and platform to light with an experiential activation, taking place this December.