David Kolbusz, chief creative officer of Droga5 London, tells LBB’s Alex Reeves what it was like to work with an indisputable icon on the new Barclaycard ad 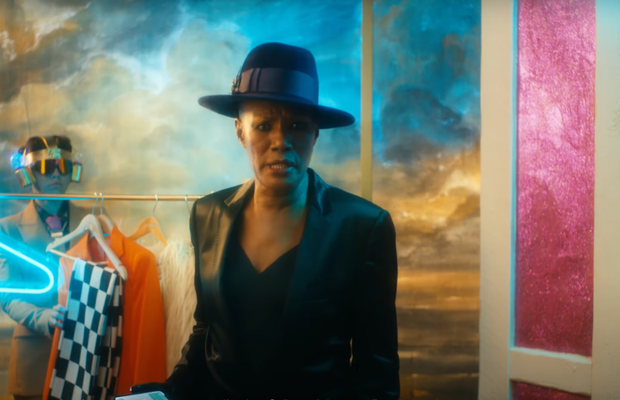 “Who is the coolest person?” That’s a question with some weight to it - one for an animated discussion in a bar maybe. Presumably not a fruitful question to ask when coming up with an idea to advertise for a finance brand. But it was the question that Droga5 London CCO David Kolbusz and his team found themselves asking recently ahead of creating a new Barclaycard campaign.
They weren’t asking a watered-down version: “Who's the coolest person that we could conceivably get?” It was straight up: “Who is the coolest person?” But when you land on the answer the debate doesn’t go on as long as you might expect. It’s obviously Grace Jones.
“She was actually the first name that came up,” says David. “She's never not been cool, all the way back to the '70s when she started recording music and modelling and creating incredible pieces of visual art with her then lover Jean-Paul Goude. She has always just been amazing and remains so to this day. She has a timeless quality about her. We considered people like Warren Ellis and Nick Cave but she was number one and just seemed kind of unattainable.”
As it turns out, Grace was in fact attainable. And the perfect fit for a film that continues the payment provider’s advertising in a direction David describes as “bonkers”. Directed by bonkers aficionado Andreas Nilsson, it’s a series of wildly exaggerated images of people trying hard to be cool in different ways, set to a track that’s also trying hard to be cool, all anchored around an effortless, genuine icon of cool.
The Droga5 team needed an icon of cool to front the film because they wanted to make a point about something that’s shifted in culture in recent years. “Money and financial management has become part of culture,” says David. “Business and their money is as interesting to people as fashion or film. The entrepreneurs are as much of a curiosity. Businesspeople are kind of like the new celebrities. That was the nucleus of this idea. If you actually treat money like it's actually quite interesting, instead of just a banal recitation of product messages from a bank. If you try and dial it up into something that affects culture then it could potentially be a more fruitful territory for communication.”
Banks, somehow, have tried to become cool. Is that really what people want though? It was quite a nuanced thought, “a very fine needle to thread,” says David. “The ambition was to do a cool commercial about how banks shouldn't be cool, using one of the indisputable icons of cool who is so unbelievably cool in absolutely everything she does.”
Writing the ad essentially consisted of listing “all the ridiculous things that probably shouldn't be cool,” says David. Food, pets, armpit hair? It started off as a voiceover and then eventually it became an oddly infectious, speak-song sort of soundtrack.
“Andreas and I actually sort of wrote the track in a bar,” says David. “Then he briefed it in to a couple of friends of his and they came back with this techno track, which I found wildly irritating at first.” David and creative director Matt Hubbard agreed the track was too much. “[We] thought ‘this is really intense, and we probably need to calm it down’. But we couldn't get it out of our heads and that was the one that we went with.”
Armed with a list of deeply uncool scenes to create, the day came to bring them to life with Grace herself. Andreas couldn't wait to make a film with her in, especially as the last time she was in an advertising campaign it became one of his favourites - another bonkers ad for Citroen way back in the ‘80s. But you know what it’s like. Meeting your idols can be a bad idea.
“In advertising, you work with a lot of celebrities, and some of them are nicer than others, and some of them are more generous than others,” says David. Grace Jones is not one of the difficult ones though. “She was just incredible. She was eager to please. Of course she had opinions, but they were all valid opinions. Everything we did was kind of put through her filter of what she felt was good and acceptable and cool. Throughout the entire process, she was collaborative and generous and opinionated, but in the best way possible. Legitimately lovely and nice and warm. She's obviously very aware of her power and the fact that she is an icon, and she's very generous with that. She makes sure that everyone feels loved and appreciated and taken care of. Every image of her screams iconic, you just think ‘that's someone who would never condescend to talk to me, she's so cool’. And she was the opposite of that. She was so warm and lovely and friendly and amazing.”
With the right team and one legend as the catalyst to bring it all together, the resulting film is a joy. “It's a lot of information. Visually, aurally, it's a lot to take in,” admits David. But at the same time, the message is pretty clear. There's a clear through line, you understand what the takeaway is.
“Huge credit to Andreas for piecing that jigsaw puzzle together and a huge credit to Barclaycard for having the bravery to buy it. It's not an easy ad to buy. And it's not an easy ad to see through to the finish like that.”