Come and Hear the Experts Speak at LBB & Friends Beach 2019

Sun, sea, sand… and some serious discussion with full range of activities planned for the week 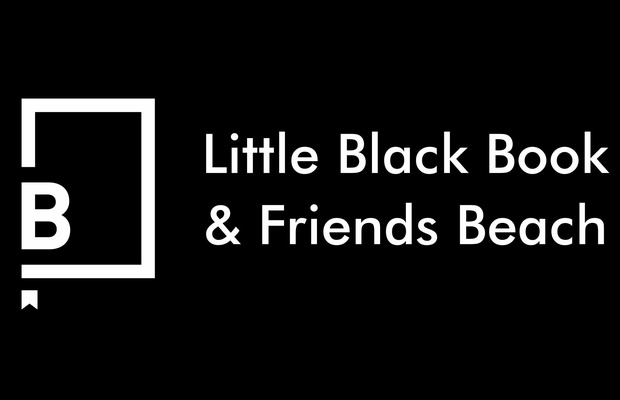 The LBB & Friends Beach is celebrating a decade on the Croisette – and the original Cannes beach club is growing up in style. Not only has the Plage Croisette Beach had a gorgeous makeover but we’re using the space to host a series of forums and discussions focussing on the real topics we’re all talking about in 2019.

A couple are by invitation only, but others are open so swing by and listen in.

As ever, there’s Happy Hour, 4pm-6pm, Tuesday-Friday. And, this year, in celebration of the 10th anniversary we’ll also be hosting a big old party on Wednesday 19th. The bash will kick off at 9pm and will be DJ’d by the one and only DJ Miss G – a.k.a. Georgie MacEchern. If you have a wristband for the LBB & Friends Beach, that will also get you entry to the party, you lucky people. Big thanks to our drinks sponsors Absolute Post, AOI Pro, Cinelab McCann Craft, MediaMonks, and Modern Advertising.

Everything you need to know about the LBB & Friends Beach this year can be found here.

Together with the International Advertising Association (IAA) we will bring the House of Commons to the beach in Cannes this summer. Will you vote for or against the motion - Creativity is the most important factor in a business beating its competitors. Leading figures from the world of advertising will present the case for and against the motion – watch this space and make sure you are there to cast your vote!

Title is Testing in The Lions’ Den

This panel will reveal the results of System1’s latest testing project and explore effectiveness and creativity. There will be a game show where if you can predict which ads scored well you’ll win free drinks. And there will be our hot-off-the-presses reveals of how this year’s Cannes favourites have tested.

We wanted to do a bit of research into the old idea that testing kills creativity. It matters what you measure. We can see with our own eyes that the work that wins Gold Lions at Cannes is a lot better than the baseline ad.

But how much better? Which are the best of the best – the ads which not only won over the juries but proved their effectiveness with a real audience too? And is there a gulf between the ads that move consumers and the ads that delight juries?

That’s what we decided to find out. Testing In The Lions Den takes 75 ads – Gold Lion and Grand Prix winners from the 2010s in the film category – and tests them just as we would any other ad.

The Indie Creative Showcase - By Invitation Only

Julian Boulding, Founder of thenetworkone, will chair a discussion with leaders of three of the world’s most interesting and original independent creative agencies. No egotistical bullshit and no sales pitches - just real-life insight into how to build an agency culture that leads to amazing creative work.

The State of our Industry - By Invitation Only

Laura Swinton, Editor in Chief and MD of Little Black Book, will chair a discussion with four of the most influential and ground-breaking figures in the creative agencies world today. No platitudes, no pre-scripted corporate messaging – just what the heavy hitters really think about what it takes for agencies, consultancies and marketing clients, to succeed in today’s high velocity communications ecosystem. Where our industry stands today, and where we need to go next.

Budget's Down. Pressure's Up. Who's giving a S#*t?

Can great work still thrive when all anyone seems to care about is getting more for less?

In a world where it appears the only certainty is marketers having to produce so much more (and so many different kinds of) stuff without bigger budgets to match, can you really get quicker, cheaper content without losing your creative soul? Or is great work the inevitable first casualty of the rush to do more for less?

Hear what five ad industry luminaries, all with very different perspectives, have to say on the matter.

Andy Fowler, Founder and ECD of Brothers and Sisters

The panel will be moderated by Laura Swinton, Editor­in­Chief and MD of Little Black Book

Can creativity and performance be best friends again?

Visual Diet: How we can help you improve yours

An advocate for artists since a young age, Marine Tanguy managed her first gallery at age 21, opened her first art gallery in Los Angeles at age 23 and finally created her current business in 2015, MTArt Agency, breaking from the gallery model to promote better the artists she believed in across the globe.

She was recently awarded Forbes 2018 30 under 30 Europe: Art & Culture. She is a writer and frequent speaker on contemporary art. Her talks include two TEDx Talks on how to transform cities with art and how social media visuals affects our minds.

This talk seeks to build further on the theme of Visual Diet presented at the Lumiere Theatre on Monday 17th with Rankin and Jude Kelly CBE.

How Do You Lead World Class Creativity?

Creativity is the genie in a bottle, the ingredient everyone craves. Some businesses are more creative than others… but why? What does it take to lead a team that can perform at the highest creative levels? What are the do’s and don’t’s of running a business that strives to produce creativity that resonates worldwide? 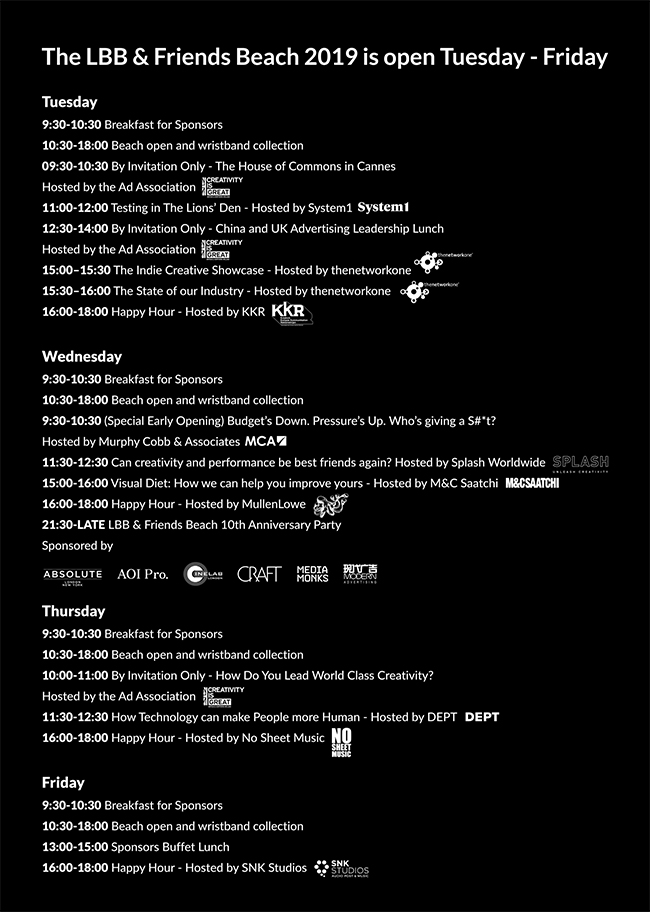 The LBB & Friends Beach Returns for 2020

The Beach that Rocked