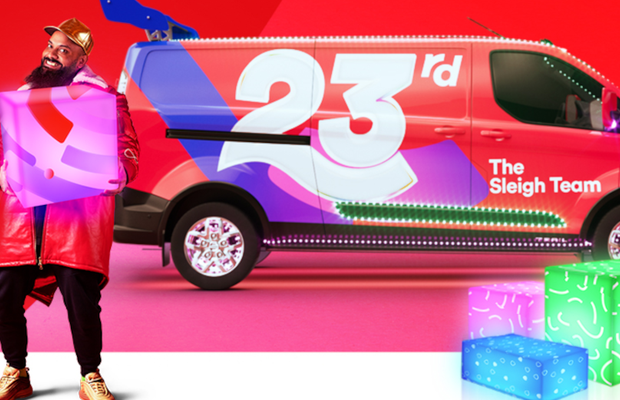 This festive season, Virgin Media is offering its customers a line-up of must-have prizes, money-can’t-buy experiences and a series of tech giveaways in its latest customer campaign.

The campaign, titled ‘Chri23rdmas’ and devised by customer experience agency RAPP, aims to deliver the magic of Christmas day 48 hours early with a whole host of prizes available to win on 23rd December – from VIP box tickets to see Coldplay to an unforgettable trip to Richard Branson’s luxury lodge and an exclusive dining experience curated by Jimmy Garcia.

British comedian and star of ‘Man Like Mobeen’, Guz Khan, fronts the gift-giving campaign, reimagining the traditional role of Santa.

The campaign kicks off today and wraps up on 23rd December – with a two-day activation taking place on 7-8th December in Kings Cross, London. The interactive experience ‘Winner Winner Festive Spinner’, designed by creative engagement agency Audience, will treat passers-by to music from a gospel choir and orchestra, and give them a chance to win a range of prizes from Virgin Media. Prizes up for grabs, which include broadband speed boosts, Virgin Experience Day vouchers and tech goodies such a sound bar, can be won via a spin-the-wheel mechanic, with Virgin Media donating £1 for every spin to its charity partner Carers UK. In addition, Virgin Media is also giving 350 Virgin Store vouchers to unpaid careers to enjoy a film on them, with the option for customers to also gift an unpaid carer they know over the festive season.

Simon Groves, director of brand and marketing at Virgin Media O2, said: “It’s officially the season of giving and we’re getting into the spirit early by giving our customers the chance to win a huge range of prizes and once-in-a-lifetime experiences. We’re also giving the public the chance to give back to unpaid carers with our spin-the-wheel activation at Kings Cross – with prizes for everyone and a £1 donation to our friends at Carers UK for every spin.”

British comedian Guz Khan, said: “You know that warm fuzzy feeling when you open a gift on Chrimbo day? Well, I’m working with Virgin Media to deliver that feeling 48 hours early this year – because why not? And even better, the fact that we can give some good times and energies to our most valued unpaid carers makes this a very special Christmas!”

Adam Rolfe, creative director at RAPP, said: "We knew Virgin Media customers, like the rest of us, were denied a proper Christmas last year, and would be desperate to get on with the celebrations sooner rather than later. So, in true Virgin Media fashion, we broke with tradition and brought the joy (and treats!) early. And unlike your bog-standard prize draw, we thought we'd give something to everyone, something that would give them 48hr early access to things they love every week of the year."