Creatives of the Hakuhodo Network: Tasting Success in Thailand 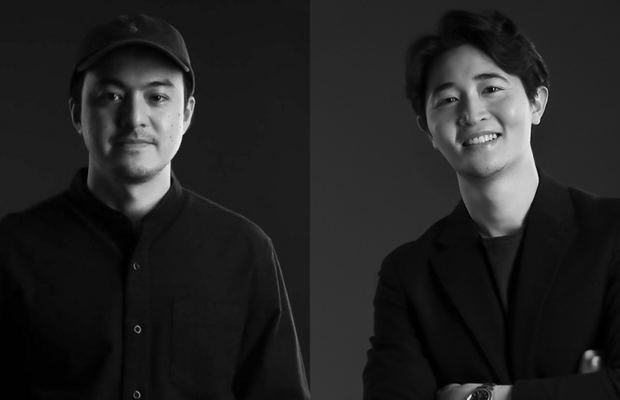 Spa-Hakuhodo. is based in Bangkok, where the team pool their creative talents to combine online and offline executions, delivering integrated marketing and brand communications for their clients. They contributed to the success of Hakuhodo becoming Network of the Year at ADFEST 2021 with a bronze medal for their online film 'Free Your Hunger' for GrabFood, a food and service delivery provider. This innovative and entertaining campaign used food as a way to get people thinking about tricky cultural issues in Thailand, helping to make them more palatable for the general public and starting conversations on various levels.

In the fifth in its series about Hakuhodo’s creatives around the world, the company speaks with two of the talents from Spa-Hakuhodo behind 'Free Your Hunger' the creative director, Pak Bunchusanong (Pak) and business development director, Chanwit Trakoolpaiboolpol (Charn) - about their endeavors.

It is probably no exaggeration to say that Thailand is a land of foodies, where people love eating out. From casual street food to elegant restaurants, there is a huge variety of eateries. With the Covid-19 pandemic lockdowns and concern about going outside, food delivery services like GrabFood fulfill an important role in helping people to continue to enjoy their country’s rich food heritage. Spa-Hakuhodo’s “Free Your Hunger” online film tapped into this trend, but put a unique spin on it by questioning long-held norms about younger people not speaking up.

The film shows three typical scenes where people are debating what to have for lunch: colleagues in the office, university club friends talking, and a mom and kids at home. In each case the oldest person—the boss, the club senior or the parent—always decides what the group is going to eat, until one day a younger person has the courage to step up and suggest ordering something different for a change. The story is punctuated with GrabFood’s mission statement, “Stop eating what you’re told; start eating what your heart desires.” 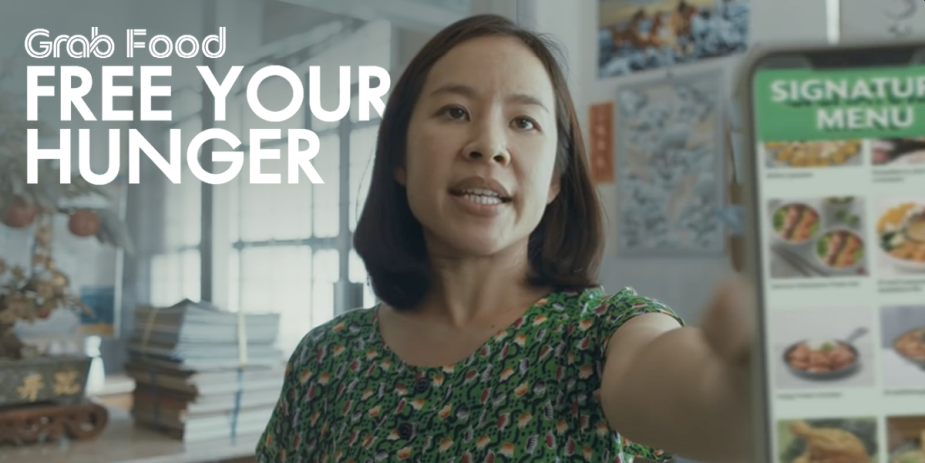 “It is considered a norm in Thai culture to always respect your elders. A general rule of thumb is that you should not talk back when they’re talking to you. As times have changed and Westernized ideas have become more prevalent, however, the new generation of Thai youth are braver and more opinionated than ever before, while the older people are starting to learn to listen more to their juniors,” Pak explains. This need to be heard has been one of the biggest social media trends recently among young Thai people.

“With this campaign, which aims to tackle the insight of the younger generation, our intention was to make a quick and effective correlation with our client GrabFood’s services,” says Pak. The campaign captured the hearts of the public, proving to be extremely successful.

Breaking out of the box

Another notable aspect of this campaign is that it features the idol girl group BNK48. They are the third international “sister group” of Japan’s AKB48, which has become a social phenomenon in Japan. While BNK48 are popular with their loyal fan base in Thailand, their collaboration in “Free Your Hunger” was a valuable opportunity for the group to gain wider exposure. Several members starred in the online film and they provided the accompanying theme music.

“We wanted to present them as regular girls, not idols. The whole subculture of the idols is that they can’t break away from a certain image,” Charn explains. “We wanted to show who they really are in this campaign.” The social media presence of BNK48 helped to promote the campaign, with the film going viral and giving rise to a plethora of memes.

Like much of the world, in Thailand - especially in the cities - government measures are preventing people from dining out, so food delivery has become a very important way to connect with food culture, and GrabFood was perfectly placed to tap into this trend. It started as a transport company but has now extended into food and grocery deliveries, and is a major player in Southeast Asia.

Even though Thai people are staying at home more due to the pandemic, they still want to eat their favorite street food. GrabFood is a way for them to support local eateries and indulge their appetite at the same time, so a win-win for everyone involved. There is even a “support local” section within the app for GrabFood, allowing customers to order from independent businesses in their area and get specials, such as free deliveries or discounts.

Against the backdrop of the ongoing pandemic, Charn mentioned some of the current food trends in Thailand, which include engaging in activities while working from home, such as make your own drinks or do-it-yourself crepe kits. Another popular trend is “localized international menus.”

“Thai people love to experiment with any cuisine from around the world but there is one requirement—it has to have the familiar Thai flavor to it! For example, Korean fried chicken with Thai-style herbal seasoning,” Charn says.

Japanese eateries are also leading another trend, known as “at-home omakase.” Since people are also seeking new dining experiences, some of the more elegant Japanese restaurants are offering a delivery service, whereby they bring a boxed set of ingredients to your home and serve you right at your front door, sometimes with a skilled chef doing the presentation.

Asked about his own favourite dishes when ordering lunch, Pak laughs. “Whatever gets here the fastest! Thanks to GrabFood’s features, like ‘Grab Thumbs Up’, there are always new recommendations for us to explore.”

Pak says the Spa-Hakuhodo team are honored to be included in Hakuhodo’s win as Network of the Year at ADFEST 2021, and that it has fostered an even greater sense of mutual motivation to continue pushing forward in the near future. “Sometimes by stepping outside of the agency mindset and exploring other disciplines and industries, such as the tech industry or even a social movement, it can inspire a fresh and relevant work.”

According to Charn, there is a strong sense of taking pride and ownership in one’s work at Spa-Hakuhodo. “If I can speak on behalf of the Spa-Hakuhodo family, our work culture is that we all strive for the best, as if our own personal reputation depends on it,” he says. He added he and his colleagues are fortunate to have a management team who are “very open minded and willing to listen to team members with a valid opinion.” 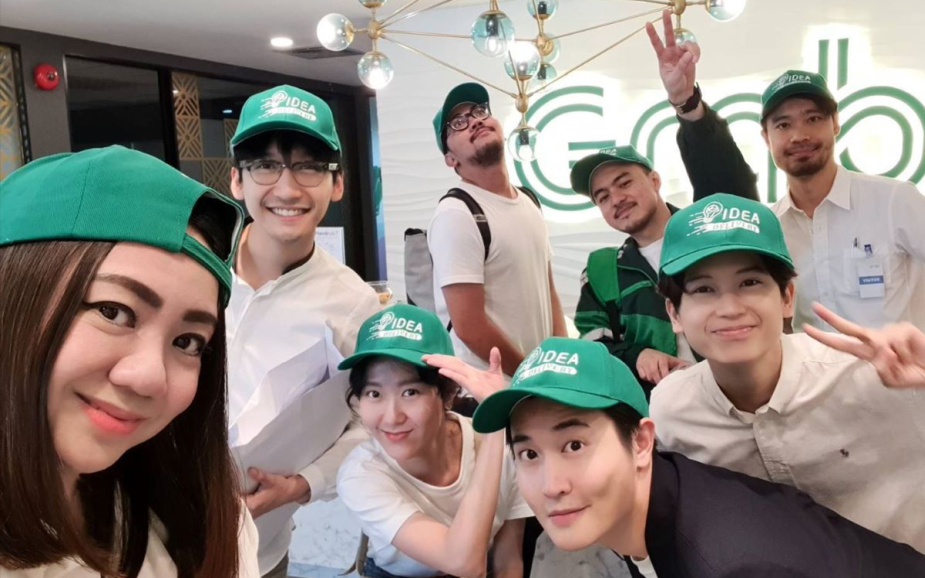 Spa-Hakuhodo members at the client’s office, where it is all about coming together as “one team”.

Charn points out that it is becoming increasingly easier for the clients and the suppliers to establish direct communication, so as the “middleman,” agencies like Spa-Hakuhodo must keep up with trends in working styles. “That is why it is crucial that we offer more than just operational services but, more importantly, consulting and business solutions services to our clients. In the end, what our clients truly need is a business partner rather than a mere agent to act on their behalf,” he says.

Pak agrees, and adds that there is a need to stay “fluid” these days. “Most campaigns are not just purely conventional or purely digital. There are aspects of both within the industry, and so you have to be flexible.”

The pair finished the interview by sharing their personal philosophies that have inspired them in their careers to date. “Mine is ‘walk by faith, not by sight’,” says Pak. He adds that having clear sight is good but sometimes you need to draw on a strong faith to help you be brave enough to tackle and conquer the unseen challenges ahead, even if they seem daunting.

“My motto is, ‘Always look to create value in everything you do and leave a legacy your future self would be proud of’,” Charn explains. “Sometimes my role as account manager can be undervalued, compared to the creative team, but I have always felt you can take any role in the direction in which you want to go!”