The CMO / ECD of cannabis company Tradecraft Farms on growing up an introvert, his “deep thinking phase”, and why rules are boring 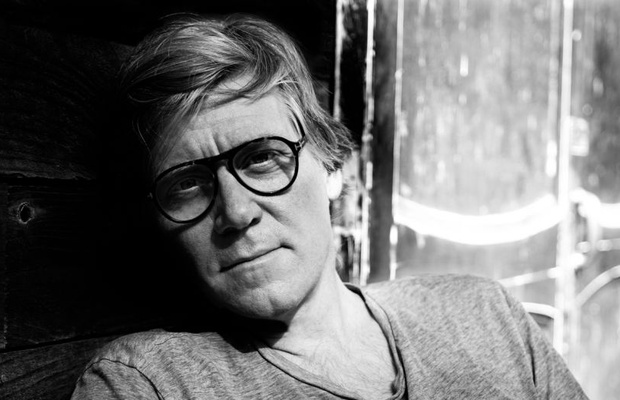 Petros Papahadjopoulos is the CMO / ECD of Tradecraft Farms, a cannabis company that was founded over a decade ago in Southern California by a small tight knit group of family and friends passionate about the art and craft of growing cannabis. Tradecraft now has retail stores and cultivation operations across the US, operating under the Dub Brothers umbrella.
Petros' career is an interesting one. He started as a children’s book writer and illustrator, moved into graphic design, became a creative director for a multimedia company in San Francisco in 1999 (where he created the first rotoscoped music video before Waking Life), went on to design and program for Disney and then started getting into EFX work in advertising. He then became a creative director for a live tour agency working with the likes of Madonna and other big names, which led him to start directing music videos and commercials. Then he got into working as a creative director with agencies before starting a shop called Louder Than Bombs with Anthemic Agency in LA.
All of this led him to where he is now, heading up creative and marketing for Tradecraft Farms and leading as head creative for Dub Brothers. He also still directs, this year shooting a Danny Elfman music video. We're thrilled to dive deep into his brain and the way it approaches creativity (with a couple of smatterings of work featured throughout).

I was born a Greek kid in the suburbs of Buffalo, New York. I was a bit of an oddball mainly because I was a complete introvert. A lot of times when other kids met me, they thought I was deaf because I didn’t speak much. I didn’t mind really long awkward silences because that gave me time to observe someone.  I’d be taking in the tambour of their voice, the pacing of their movement, the lighting on their face, thinking about the story of their life, everything but their name. I could never remember their name.
When I got to be 16, being a total introvert didn’t really work well for getting a girlfriend. So I started transitioning out of that shell. I’m sure there’s probably an official diagnosis for what I was but after a lot of work and rewiring I’m now a reformed introvert.
My creativity, however, is still very much shaped by how I started out. I rely on observation and a sense of being an outsider - observing what’s going on without getting caught up in group thought. That’s also why I enjoy living in Los Angeles, the most diverse city in the US. It mixes ideas and people - be it gender, race, orientation, people from other countries and socioeconomic backgrounds. It keeps things fresh and interesting.

Judging the creativity of a piece of work starts with how original an idea is. I took a film class from Stan Brakhage, the father of avant-garde film. His ideas were out there, totally original, sometimes earth shattering, but other times they were not even remotely interesting — you’d be looking for gum on the bottom of your seat, anything to escape the feature length boredom he was presenting. So there’s another dimension to creativity - it has to speak to you.
At its best, creativity will hit you with surprise - you’ve never seen anything like it, the more surprising the better, and yet miraculously, though totally novel, it speaks to you, it understands you. It’s like Dr Dre’s ‘The Chronic’ or The Beach Boys’ ‘Pet Shop Sounds’. Each was like nothing that came before, yet you’ll take an album like that to bed with a pair of headphones and listen for hours because it speaks so personally to you.
That’s significant creative, when new meaning explodes into your life because someone’s work has wrapped revolution in a language you understand. The first iPod ads were purely visual but they captured the spirit of something we could all understand - freedom of movement and self-expression. This device was about to revolutionize our world. It was done very simply but in such an iconic way that it was simply unforgettable.

There are different processes along the journey to complete a project.
I start out collaboratively - talk to the money people, talk to the brand people, talk with the client, come to understand the world where we are going to land our creative. Every project has its own world with its own physics and laws that you have to abide by. Once you’ve internalized the rules let them go. Because rules are boring. The kind of boring that can ruin getting off the ground.
Next, I immerse myself in the world I want to inhabit. I walk the streets, live with the people, listen to their stories, take notes, make observations, eat the cheeseburger, drive the minivan, try the edible, or whatever the product might be. And most importantly, I watched all the other projects that have been done before on the subject. Then, like a Mission Impossible film, I burn the tapes of what I just heard. Don’t think about rewinding and watching over and over or you run the risk of getting caught up in someone else’s inspiration.
Next is the vision quest, the burning bush in the desert. You become a rainmaker.  Basically, I take a drive or a run, sweep the house, unload the dishwasher, let it all go. This is a deep thinking phase, it’s a different brain wave than chatting and interacting with people, and one that’s best done solo.
Once I’ve caught a few exciting ideas, I’ll will take out a pad of paper and pencil. There is something about the kinetic process and pacing of pen on paper in my hand that works really well for me. I start writing words and making sketches. In this phase the baby inspirations grow up and become big boy and girl ideas that luckily have no idea what’s in store for them in the next phase. 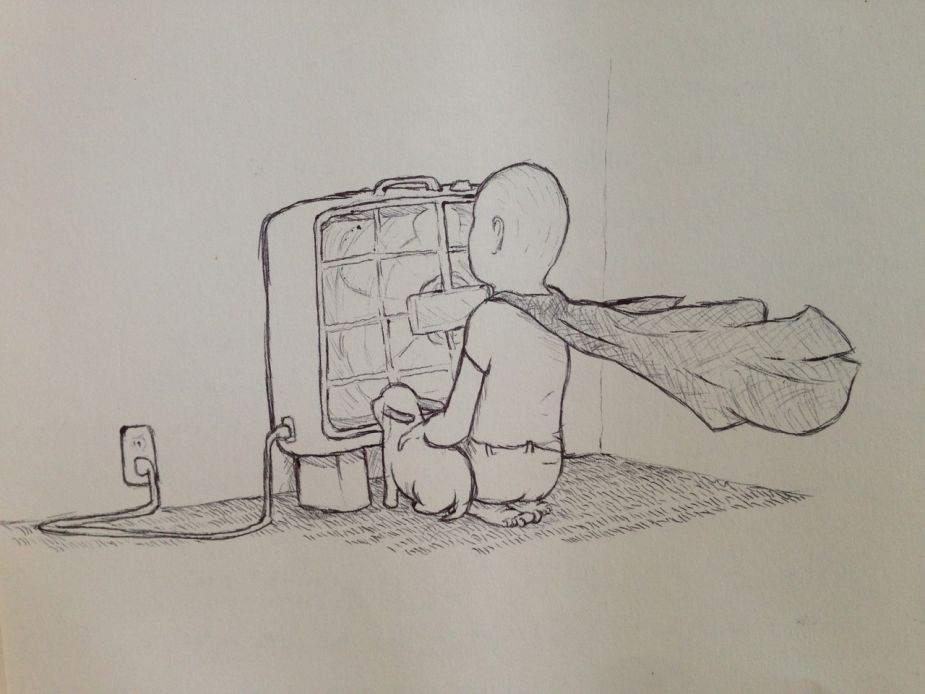 Sketch from sketch book
Ego is not good in this next phase. You have to be willing to throw it all away, to ‘kill your darlings’. But once I’ve found that spark, I feel like I’m in the ring. I’m part of the fight now, ideas will get left on the floor, but the story will begin to unfold. You let go of the details and follow the flow of the inspiration. This is usually a collaborative process.
Next is the editing and refining phase, getting feedback from all over the map - the client, a person on the elevator, your team, your opinion today vs after sleeping on it, etc.
And finally you reach what a close friend of mine calls ‘Driving the Bus’. Deep think is over, you take the winner and allow the years of whatever skills you’ve filled your war chest with to play out. You sit in front of the computer or whatever device you use, put on some headphones, get a bag of chocolate covered almonds, check the map, and you just drive until you get there.

There is always a level of luck to things. The right timing that might launch a career in one direction or the other. The environment that shapes your opportunities, which in turn shape your career along with a huge heaping tablespoon of your own sweat and tears and innate POV.
Example: the first live action music video I ever shot was for Rufus Wainwright, ‘Rules and Regulations’. That was a huge deal for me to get that job, it launched my live action directing career. The first step was, I had moved to LA so I could be the guy sniffing around the Interscope offices waiting for an opportunity to happen. As luck would have it, I was in the office of the video commissioner at Interscope, Nicole Ehrlich, when the call came in. They needed a treatment. I happened to be there. ‘A 19th Century Work Out Video' was the idea, they loved it. The next day, I was off to London to shoot my first video for an incredible artist.
At agencies, the biggest pitfalls I often see are ego (people getting in the way of the process) and unbalanced teams. A good team leader has the vision to know how to get the visionary to give direction without going off the rails. They give the genius the right environment to emerge from their cave with the holy tablets and tell them all to sit back and let the virtuoso pull it all into something everyone understands. So the team leader has to be great at recognizing talent, knowing how to inspire collaboration, and knowing how to push a team and make sure the loudest voice in the room doesn’t win the day every time. These rolls are all archetypes, sometimes the rolls switch throughout the process.
And ultimately, you need a really solid account executive/salesman that doesn’t just sell the idea, but makes the client feel comfortable enough to spend the right money and trust in the process enough for outstanding work to occur. And if the metaphor is Game of Thrones, he has to ‘Hodor’ long enough and wide enough for every one of our favourite characters to escape certain doom. (Doom in this case would be producing a boring idea).