When creativity is fused with cutting-edge technology the results can be mind-blowing, writes The Croc ECD Nick Watmough 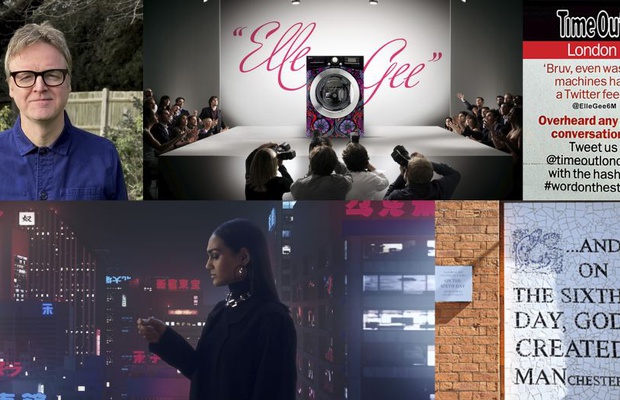 The Croc ECD Nick Watmough has successfully led campaigns for brands including Ford, Sony Mobile, Lucozade and many more. He has also held senior positions at agencies Ogilvy, Digitas and Publicis Sapient and worked at Sky Creative.

Find out more about his creative process below...

When she was younger, my daughter asked me what I do during the day – ‘I sit around talking a lot, writing fun stuff and that’s about it!'. Wow, she said ‘that’s what I want to do when I grow up.’ That struck a chord with me, we work in one of the very few industries where you don’t have to grow up. Every day, I feel a bit like Tom Hanks sliding across the massive piano keys when nobody's looking. I still get that feeling when a brief lands on my desk and with it, the opportunity to create something new.

With ever-tightening deadlines and complex deliverables, it’s easy to lose sight of the fact that we’re privileged to work in such a cool industry. But just take a glance out of the window and see people doing real jobs and you realise you wouldn’t change it for the world.

I like to think I’m fun to work with and to me that’s important. If you’re not having fun creating ideas, then your ideas probably aren’t that fun either. Maybe you’re even working in the wrong industry.

I don’t have a creative den with a stuffed beaver hanging on the wall or designer toys sitting on a glass desk (although, I do have a rather nice set of Sgt Pepper figurines!) My creative sanctuary is out on the road bike. The North Downs is where I do my thinking and recharge the batteries. It’s been difficult for everyone during the recent lockdown and for me, the world makes a lot more sense when I’m pedalling through it.

Sometimes you just know an idea is great straight off the bat. The feeling has been likened to a ‘smile in the mind.’ It’s when everything about the idea just sings and your intuition tells you it’s the way to go.

However, you usually need a little bit more than that if you’re going to secure the approval of a hard-nosed marketing director, so here’s my theory.

Does it excite you?

Have you seen it before?

Is it different for the category?

And do I want to make it?

If it ticks all those boxes, then you’re onto a winner. That criteria never really changes, because you should always be excited by the ideas you come up with and want to make them at any cost.

I’ve created huge pan-European campaigns for Ford that cost insane amounts of money, but the recent cinematic Sohonet campaign and the LG work I made for a fraction of those budgets excites me far more. Indeed, being pushed into the low-budget corner provides the kind of limitations creativity needs to flourish. For example, we turned a washing machine into a tweeting fashionista during London Fashion Week and asked two fashion journalists to voice it. A bit of a diva, Elle Gee whirled up a lot of buzz for a tiny budget. If we’d had millions to spend, and endless levels of approval to go through, it may have just ended up being a manifesto and a packshot. I’d love to see that, but only because I’ve been having trouble sleeping.

For me, when creativity is fused with cutting-edge technology the results can be mind-blowing. FIFA 21 brought back Kiyan Prince, a promising QPR footballer, who was tragically stabbed to death 15 years ago. Technology has enabled a brilliant way to remind kids of the dangers of carrying knives on the platform they frequent the most and kept Kiyan’s legacy alive.

There will always be great work and mediocre work. How many restaurants on your local high street have Michelin stars? The point is, doing something exceptional is hard, no matter the discipline, but brave clients and brave agencies will succeed regardless.

I’ve always found the worst time to look for inspiration is when you need it. Soak up culture all the time and the ideas should fall into place.

There’s no tool as powerful for generating ideas as the subconscious mind. No matter how counterintuitive it may seem, the best thing you can do when you can’t crack a brief is to do something completely different. This gives your subconscious the time to get to work. Amazingly, you’ll find ideas popping out of thin air while you’re wandering aimlessly down the frozen aisle in Tesco.

Only by constantly collecting cultural experiences can you make the most of that blank sheet in front of you and I don’t mean just in advertising. So, try that extreme sport, go to that festival or for the truly masochistic, attend a poetry evening. No creativity exists in a vacuum, so it’s up to you to find the sparks of inspiration.

Over the years I’ve learned to listen more. I don’t have all the answers and ideas can come from anywhere, so collaboration is key. We work in an industry where communication is vital and the seed of an idea can quickly become something great with the right people in the room.

I grew up in Manchester, the epicentre of UK music culture in the 80s and 90s. I started knocking up flyers for clubs and designing artwork for my mates’ bands. Peter Saville’s Joy Division and Factory records work had a big impact on me, as did the Hacienda nightclub where I was hanging out at the time.

I remember winning a few art competitions as a kid and when the ‘Madchester’ epoch exploded, I was hooked. I just soaked it all up and brought that rich cultural frame of reference to a career that was hungry for it.

As an angsty teenager living in South Manchester listening to Joy Division and The Smiths, I’ve always been moved by the power of words. Fuse Morrissey’s lyrics with Johnny Marr’s jangly Rickenbacker and I’m anything but miserable now, unlike the old crooner.

Like Noel Gallagher, I wanted to be a roadie for the Inspiral Carpets, but that only happened in my head, so I jumped on a train to The Big Smoke and completed a degree at Ravensbourne University.

I’m one of five kids. My Mum was a CND and Greenpeace protester and my Dad stood to be a Labour councillor, so I come from a family with a lot to say. That, and the fact that most Mancs never shut up, has probably helped me hone my leadership skills.

I’ve also had some fantastic mentors over the years, people who’ve given me confidence and belief in my ability. I’ve reinvented myself a few times too and that’s important if you want to stay relevant.

You probably wouldn’t get away with it now, but an old creative partner and I wrote and scamped a whole campaign in the pub which cleaned up at the awards. We had a great boss who trusted us and gave us the freedom to do whatever was needed to get the job done.

Creative teams need that time to think. I was reading about an agency that gives their staff every other Friday off to spend immersed in ‘culture’. How refreshing in an industry obsessed with the bottom line.

More from The Croc

Planning for the Best: Jack Trew on the Essence of a Strategist

The Rise of Account Based Marketing Is Killing Brands in B2B