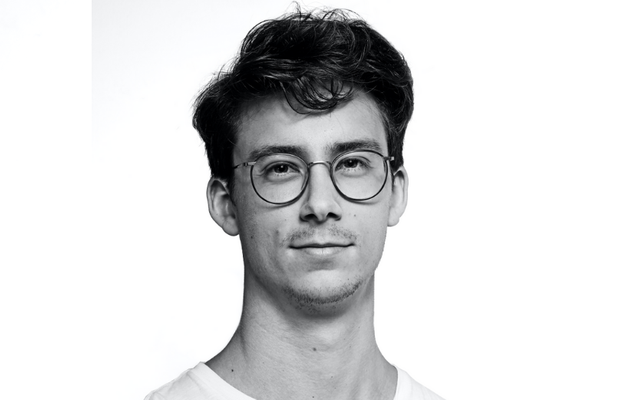 Psembi Kinstan is DDB Group Melbourne’s executive creative director. Psembi’s career began in Melbourne and featured a seven-year stint in London before he returned home at the end of last year. He was the youngest creative director in the histories of VMLY&R London and BBH London and worked across clients including Tesco, Marks & Spencer, Dulux and Audi.

He was also the first creative director to win the Audi UK account since John Hegarty in 1982; the first Australian creative to win a BAFTA for advertising; and the first copywriter to write a Chanel No. 5 campaign after Baz Luhrmann.

I'm a hungry person. One that’s been lucky enough to work for and learn from some very smart people and quietly (and sometimes extremely loudly) absorb every bit of wisdom they have put out. Nick Gill. Ewan Patterson. Mark Roalfe.  Alison Hoad. Paul Silburn. Ben Coulson. John Hegarty. Recently, Stephen de Wolf, James Cowie, and Darren Spiller. And there’s Ian Heartfield. Evan Roberts. Fran Miles. João Linneu. Hannah Tarpey. Alice Burton. Just to name a few. I’ve probably learnt even more from the art directors I’ve partnered with, the teams I’ve mentored, the strategists and business minds and marketing managers and directors that have made our ideas possible, and better. I learn from all of them, unashamedly stealing their best bits, their hard-won lessons, and studying their approach to the work.

But I’ve never really been happy with the work. I have an unstoppable optimism around ideas, but I’ve yet to conclude a project where, at the end of it, no matter the scale of success or gongs or effectiveness, I haven’t spotted the part that could have been better. Better crafted. Better extended. Better committed to. That’s the hunger; the best work is yet to come.

When judging the creativity of a piece of work, there’s no magic formula. It’s mostly gut reaction and lovingly devouring the world’s best advertising to know where the creative bar is. But that’s a short answer.

So perhaps the pithiest mantra I’ve no doubt stolen from one of the above is as follows: Is it simple? Is it different? Does it move me? The first two are straight forward. Is it so simple it can be explained in a sentence, or even better, a few words? Is it different and original, does it not look and feel and talk like all the other work in the category and in the market? It better not. Does it feel like it could only belong to your unique brand? 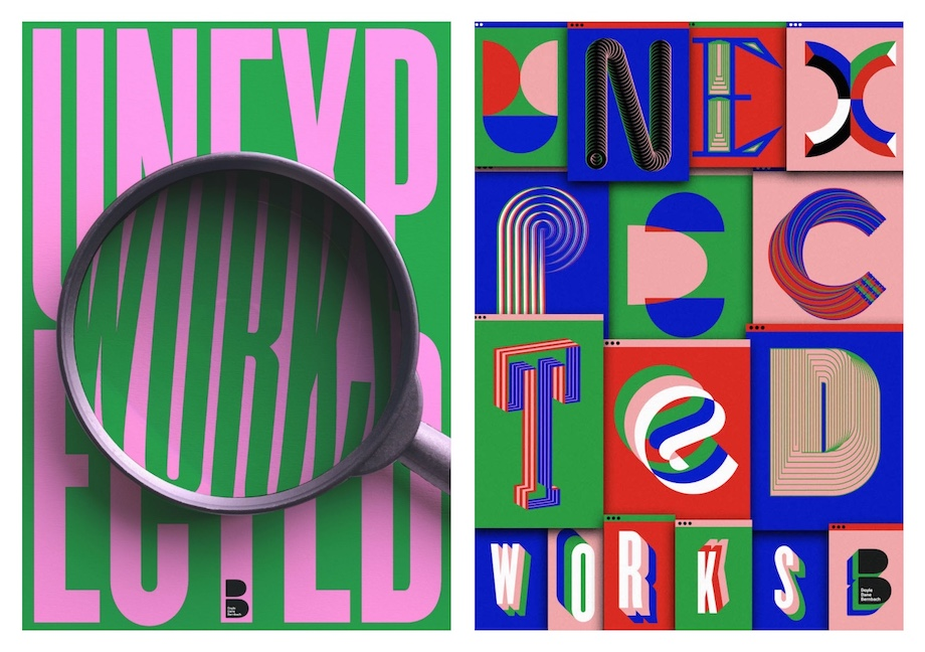 Finally, does it move me? Does it draw out an emotion and make you genuinely feel something? Does your cynical old ad bastard get excited by it? Would your wrinkly ol’ gran give a shit about it? Is it junk like most advertising out there in the world, or will people seek it out and talk about it?

One of the other things we always talk to creatives about is looking beyond their backyard. It’s no good to consume too much advertising from your own corner of the world, you’ll soon find you slip into the vernacular style of your country (oh no it’s another ‘Aussie’ ad), or your creative bar will just be too low. Better to know what India’s doing, or Brazil, or Sweden, or Japan. Ingest it all, study it all, then chuck it all out and find something distinctive and differentiated for your brand.

In a more interesting (non-Covid) world, there would be a lot less Google Slides, and a lot more pieces of paper stuck to a wall. The teams have come back and filled it with stuff. Ideas. References. Art. Photos. A few headlines. Maybe a scamp or two. A few coffees appear. The wall grows. Teams come and go with new ideas and revised scribblings. 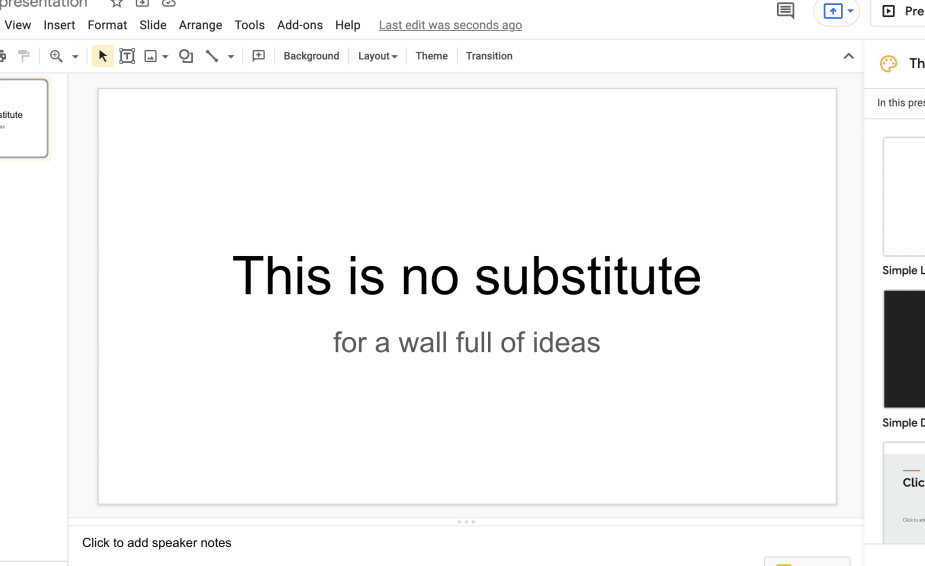 We decide to move to a bigger wall. More ideas. Headlines. Scamps. Layouts. References. Photography with little headlines scrawled with sharpies on post it notes start to appear. Someone’s brought in a photographer’s book and begins photocopying pages. Idea boards and dodgy retouched images start to fill the wall.

The creatives keep chatting. A thoughtful person goes out and gets bánh mì. More chatting. Clever strats and suits enter the room. We chat some more, excitement growing, voices getting louder. There it is, that’s the idea.

The client comes and joins the conversation. We tweak, we refine. Designers and art directors and producers and craftspeople of every variety come and make their improvements. The wall gets thick with them. The idea gets sharper and simpler and more crafted. The client gets more excited.

And then we go away and make it for real.

When I was born, my parents let my three-year-old brother make up my name. He plucked a few sounds out of the air and garbled out ‘Psembi’. That might have precluded me from a career as an accountant.

My dad worked at a wildlife park and crocodile farm as a manager, carpenter, wildlife carer and occasional crocodile skinner, and instilled a level of stubborn perfectionism and craft into everything he did (and still does). I didn’t pick up the crocodile handling skills, but that perfectionism osmosed into me through my childhood and influenced just about every creative success I’ve been fortunate enough to have. 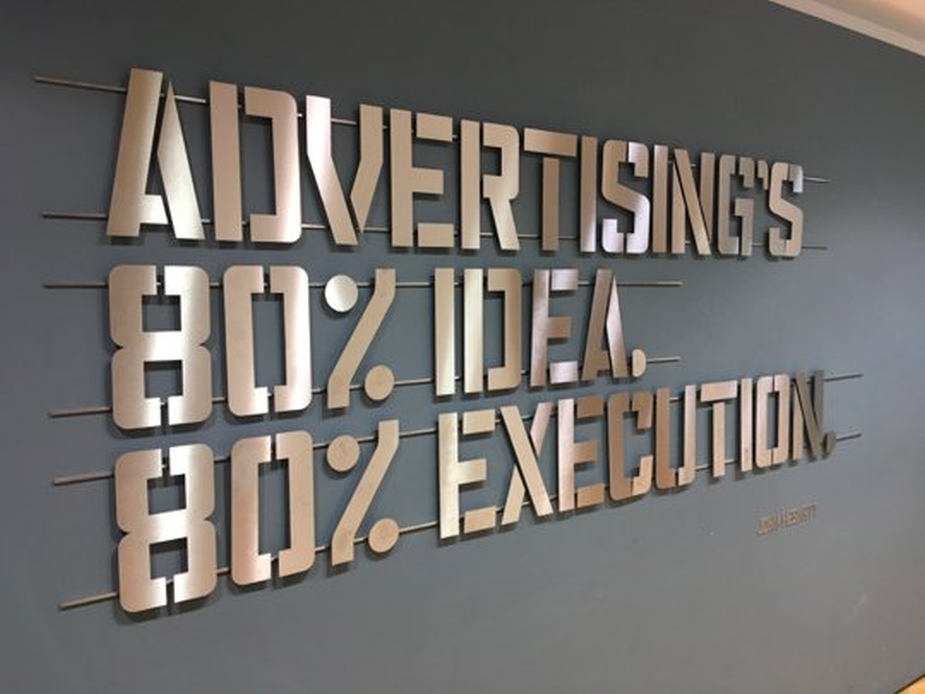 For an industry obsessed with craft, I think 99.9% of all advertising does a terrible job of it. Hegarty’s mantra of ‘advertising is 80% idea and 80% execution’ is a truth every agency and creative and client needs to remind themselves of from time to time. I often wonder what Gorilla or Balls or Surfer would have looked like on paper before the craft made those some of the best ads ever made. I think there are plenty of creative directors and clients that might have seen the scripts and thought the ideas weren’t there. ‘Where’s the joke? Where’s the clever twist? Where’s the tension?’ But it’s the craft that makes them sing.

Today, we’re probably more excited about ideas that start as experiences, or new pieces of technology, or social media experiences, but the same rules apply. Craft is just as important as the idea, no matter the media.