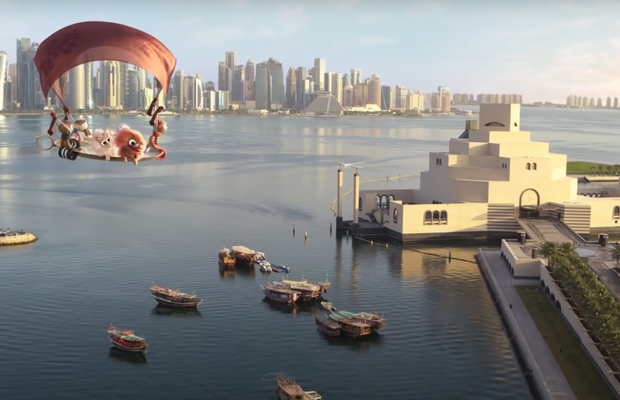 Qatar Tourism has launched its first international advertising campaign, 'Experience a World Beyond', cementing its ambition to welcome over six million visitors a year by 2030, tripling pre-pandemic levels.

The through-the-line campaign, which includes multiple television spots of various lengths, features unique and engaging keychain characters, designed to introduce travellers to the variety of experiences the destination offers alongside Qatar’s renowned hospitality.

The global campaign is inspired by the insight that today, more than ever, international travellers want to engage in authentic experiences that will enrich their lives, rather than pose for the perfect Instagram picture. It brings to life that Qatar is an accessible introduction to the Middle East, blending cosmopolitan modernity and beautiful landscapes with Arabic traditions, cuisines and cultures.

Leading hospitality and travel safety is also at the heart of the campaign, as Qatar was named the world's safest country by Numbeo's 2020 Safety Index. Amongst the increasingly competitive Middle Eastern tourism industry, the uniquely friendly and familiar campaign is designed to stand out from the crowd, helping raise strong awareness of the country and its untapped potential.

Chief operating officer of Qatar Tourism, Berthold Trenkel, said: “Qatar is a concentrated introduction to the Middle East and offers a world to be discovered, from the hyper modern, to the fascinatingly traditional. Tourists are seeking original travel experiences not just to post on Instagram, but to share with their friends and families, and keep in their own personal memory banks. This film introduces travellers to a destination that is beyond their expectations, beyond their imaginations, beyond their preconceptions, and beyond what others can offer.”

The integrated campaign will also be activated on YouTube and across social media platforms, including: Facebook, Instagram, TikTok and Snapchat. Additionally, a dedicated website is being launched by Qatar Tourism, www.visitqatar.qa, available in five languages and supported by a recently launched Personalised Travel Companion mobile app, designed to showcase the world leading destination.

The campaign film features six quirky, fun key chain characters from around the world, each representing one of the main holiday choice drivers identified among Qatar Tourism’s target international audiences.

An additional three characters act as local tour guides and are based on local fauna, with an Arabian oryx, falcon and turtle. Each of these three local characters give a taste of the vibrant and friendly Qatari culture that tourists experience when they visit.

This new campaign reflects Qatar’s commitment to expanding its tourism proposition, in line with Qatar’s National Vision 2030. Its new tourism strategy puts the visitor at the heart of all new programmes and initiatives. As part of the “Qatar Tourism Strategy 2030”, the country has added a variety of exciting experiences, including a wave of new hotels, theme parks, shops and major leisure projects, that have recently opened, or are set to launch, in the lead-up to the FIFA World Cup Qatar 2022TM.

With the aim of raising tourism to 12% of GDP by 2030, Qatar will grow and improve assets and attractions, enhance the end-to-end customer experience, invest in service excellence, and deploy a tailored marketing strategy to target point-to-point (P2P) and stopover visitors.

Qatar is renowned for its warm hospitality and commitment to excellence, exemplified by its award-winning carrier Qatar Airways, which is the only airline to be voted World's Best Airline six times by Skytrax. This is further complimented by the airline's home and hub, Hamad International Airport, which was voted World's Best Airport in 2021 by Skytrax. Such accolades further reinforces the country's warm and hospitable reputation as it looks forward to welcoming tourists to the State of Qatar through a seamless journey.