For the third time in the history of the festival and second consecutive year, the pioneer network celebrates the recognition of being the most creative in the region 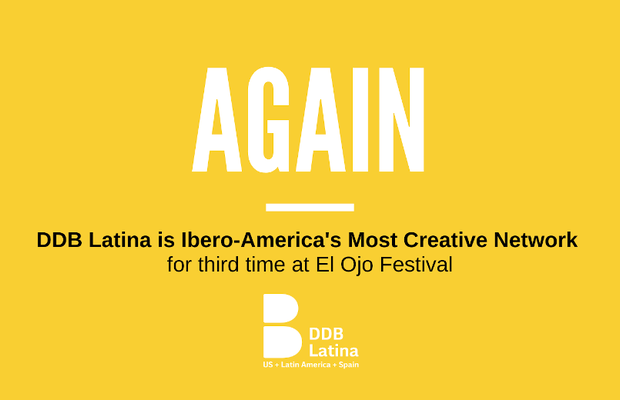 El Ojo de Iberoamérica—the most recognised creative festival in Ibero-America—celebrated the very first virtual gala in its history, where, thanks to the consistency and effectiveness of their work, 12 offices of DDB Latina won big recognitions, including Africa as Ibero-America’s Agency of the Year and Sergio Gordilho as the Best Creative in Ibero-America for the third time in the history of the festival. Alma DDB Miami and DDB Latina Puerto Rico were named Local Agency of the Year and Alvar Suñol and Enrique Renta as Best Creatives in their respective markets, in addition to a total of 91 metals: 4 Gran Ojos, 22 Gold, 30 Silver and 35 Bronze among the different agencies.

‘The most valuable news’, won two awards: Gran Ojo Graphic Production and Print & OOH. The piece is a special printed edition of the Folha de São Paulo newspaper with all the criteria used in the process of printing money and in response to what fake news represents today.

Africa’s third Gran Ojo came in the category of Print & OOH with ‘Responsible billboards,’ work created for AmBev, which, through the beer delivery trucks and by changing the branding of the drivers' cabins, aims to create awareness in responsible driving under a simple and direct message: If you drink, don't drive.

In the El Ojo Special Edition Covid-19 category, the jury also awarded Africa with ‘Stadiums food delivery,’ from AmBev Brazil for Brahma. The objective was to connect consumers with famous bars through a site in order to offer an alternative for people to satisfy their cravings for typical food sold near the stadiums and to help establishments.

Sergio Gordilho, named three times Ibero-America’s Best Creative, adds: “We are very proud to receive the title of Ibero-America’s Agency of the Year for the third time. For sharing the same space with some of the agencies that built and are building the Latino creative reputation. I want to thank Juan Carlos Ortiz and the entire DDB Latina team for always inspiring us.”

"Perhaps the word ‘again’ is the most refreshing, but also the most difficult to achieve; it requires additional effort, it requires great talent, it needs persistence, it needs to believe, and it never fails. Congratulations to the human talent we are honoured to have throughout the region, especially to Africa for having been chosen Best Agency of Ibero-America,” shared Juan Carlos Ortiz, president and CEO of DDB Latina.