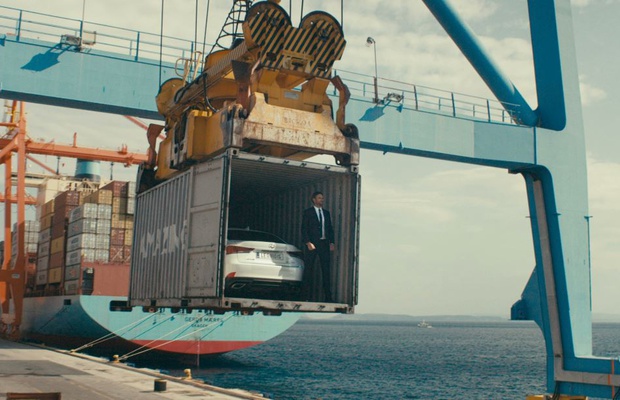 Bang TV has teamed up with Dentsu to create an action-packed campaign for the launch of Lexus’ new IS model.
The campaign, directed by Lino Russell, showcases the luxury car maker’s new model by sending it on a high-octane car chase through a working port and is the type of car commercial everyone wants to do but advertising rules never allow it - not so in Japan.
Shot in Rijeka, two hours from Zagreb on the north coast of Croatia, the film sees the hero car speeding through the port with a menacing motorbike in hot pursuit. Whilst the motorcyclist is doing his utmost to catch the car, the Lexus driver retains control throughout, demonstrating the car’s manoeuvrability as he outwits his pursuer. With its massive ships, the backdrop of the busy container port adds to the film’s blockbuster action movie feel.
Packed with hair-raising stunts and extraordinary precision driving, Bang TV called upon the services of two of the world’s best stunt men to drive the vehicles; Sam Hubinette, aka The Crazy Swede (“Fast & Furious” and “Knight and Day”), and Lee Morrison, the driver from the opening motorbike chase sequence in Skyfall. Stunt co-ordination and additional driving was carried out by Martin Ivanov, a veteran of countless Bond and Bourne features.
“Lino was adamant from the start that the action had to be ‘balls-out’. Whilst the car was the star, the bike had to be ridden in an aggressive, threatening way to justify the chase. For one of the set-ups there was a serious risk of taking the car’s roof off as it dodged under a moving four ton container! Fortunately, we had world class drivers, able to get the right balance of safety and excitement,” says Tom Whitehead, Producer at Bang TV.
Shooting the film in a fully operational container port posed a number of challenges and potential hazards. As well as health and safety issues thrown up by having a crew over a hundred-strong on set, there were all manner of logistical problems to manoeuvre, leading to the creation of a tightly timed schedule.
“We were fortunate to have a long lead in time on the production, which enabled us to build a relationship with the people at the port,” says Tom. “We have amazingly resourceful contacts out there thanks to our decade-long relationship with BAS Productions, and they pulled out every stop to make a viable plan for us, including three days testing and rehearsal on location. By the time we were ready to go, they had agreed conditional access to the whole port, carefully worked around the shipping schedules. Our plan was as tight as a drum - and then, the day before everyone arrived on location, the shipping schedules changed and the plans were in tatters.”
Tom comments: “I honestly think anywhere else in the world, if we hadn’t had the time to build the relationship with them, they would’ve said ‘Sorry guys, can you come back next week instead’ which of course by that point we couldn’t do.”
Fortunately, by this point the key representatives at the port were totally committed to the project and bent over backwards to offer solutions. “Lino’s a very passionate and painstaking director,” adds Tom, “but he’s also very pragmatic, and he knows how to shuffle the deck without compromising on the intensity of the action.”
Behind-the-Scenes in Rijeka as Bang TV and Dentsu shoot Lexus' latest campaign
“The re-jigged schedule was a masterpiece, but it didn’t leave any room for faffing about, so we ended up with seven cameras,” says Tom. “As well as a Russian arm and a drone, the crew had cameras on remote controlled cars, a KTM motorbike and even a forklift truck. If it moved, we rigged it and ran it past, over or under the hero car at some point.”
Russell collaborated with DOP Ekkehart Pollack to create a fabulously kinetic sequence that contrasts the smooth precision of the Lexus IS with the aggressive power of a fabulously evil looking biker.
“The agency was deeply involved from day one and we worked very closely with them to develop the stunts and the very tight storyboard,” says Jeremy McWilliams, Exec Producer at Bang TV. “It’s a big number to squeeze all five stunts into a 30 second action chase commercial. The level of precision required needs to be balanced with safety concerns and, of course, we still need to get the dramatic shots that Lino wanted.”
Tom concludes: “The shoot was an awesome experience, and that definitely comes across in the finished edits. Pre-production time is so often short in commercials, but on this job it enabled us to build a strong collaborative relationship with the port representatives, so that when things went somewhat bandy, they were determined to help us get back on track. And for the record, no-one was hurt. Except that one guy.”