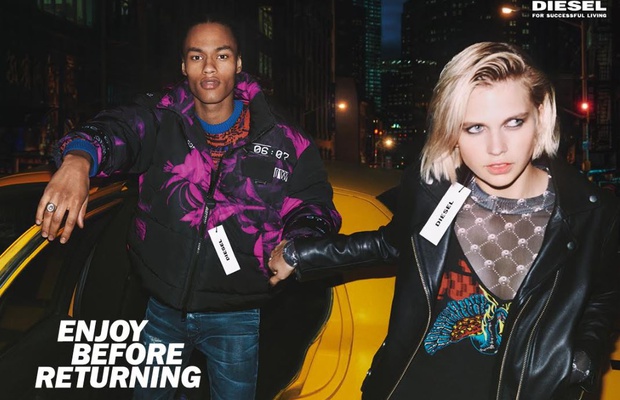 You may have heard of the term “Wardrobing.” The word is used for the act of buying an outfit, wearing it and returning it after. A lot of people do it—it’s a rising trend, and most fashion brands struggle with how to handle it.

Not DIESEL though, which introduces its new fall campaign called “Enjoy Before Returning”: a playful, nonconformist stance on this controversial topic. Rather than condemning wardrobing, the brand comes to terms with it. If shoppers are going to buy, wear and return an item anyway, why not fully enjoy it in the process?

To illustrate DIESEL’s point of view on wearing and returning, the campaign’s photographs and videos have been shot and directed by photographer Angelo Pennetta.

Penetta’s imagery lenses wardrobes wearing DIESEL’s new Fall collection, along with watches and eyewear products. All of the items—including separate watch still-life visuals shot by the photographer Roberto Badin—share the common thread of “wearing the tag out.”

A self-ironic film—directed by Similar But Different—will be released just before New York Fashion Week. The video portrays different party goers enjoying the night in DIESEL outfits with the tags prominently on display—outfits they will seemingly return the next day. Throughout the film, a voice over will ironically recite DIESEL’s return policy. The point? DIESEL does not condone the act, but it will not hold it against you.

Following the release of the film, DIESEL will host a “Return Party” at London Fashion Week.

The campaign’s overall creative concept and execution was handled by Publicis Italy.