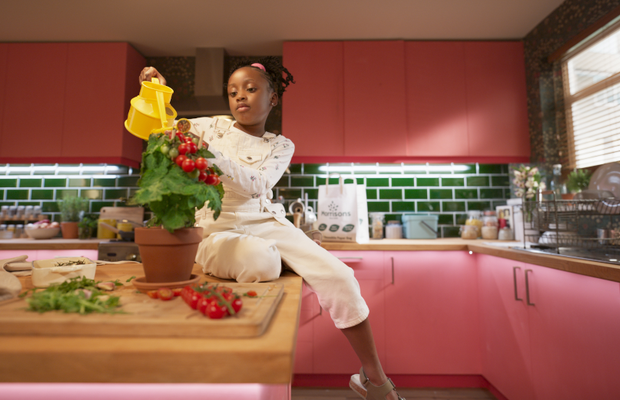 Morrisons is launching the first TV ad as part of its new ‘Make Good Things Happen’ brand platform. The ad will debut this Friday (18th June), in the ad break just before the England versus Scotland football match. The Euros 2020 battle between the old foes is anticipated to be one of the most watched programmes of all time in the UK.

Created with Publicis•Poke, the ad aims to inspire the public to imagine a better way of making, eating and cooking food by seeing the world through the eyes of children.

The ad reminds viewers of the feeling of joy that “proper good food” can bring and shows them the care and attention that goes into growing and making the food that Morrisons sells.

It shows how Morrisons sources fresh produce and buys whole crops directly from British farmers as well as the close relationship it has with the fishing industry, enabling local fish to get to stores quickly. Once the food reaches Morrisons stores, the ad shows the skilled Market Street colleagues who are on hand to share their knowledge and expertise with customers on how to prepare and cook the food to help 'Make Good Things Happen'.

The ad builds on feedback from customers who said that during the last 12 months, one of the things that got them through the tough times was reconnecting with food. Whether that was learning to bake bread, decorating cupcakes with the children or just giving more time and thought to what to make for dinner.  As a result, customers said they now have a better relationship with food and want to know more about where it comes from and how it is sourced.

Alex Rogerson, marketing communications director at Morrisons, said: “During the pandemic, food has become even more important - it has become a way to make good things happen in the hardest of times. Our new brand platform aims to help support the nation’s journey to improve the way it produces, purchases, cooks and eats food to help ‘Make Good Things Happen’ for the next generation.”

Dave Monk, executive creative director, Publicis•Poke, said: “11m people cross a Morrisons threshold each week. If we can encourage all of them to make one good thing happen each to another, that’s a lot of small but impactful good deeds throughout the year. And if we can help elevate people out of their food rut by inspiring them across their commerce journey with a little magic from kids’ imagination, all the better for it.”

The brand platform will also be used to communicate the wider role Morrisons plays within local communities as well as the work being done to “Make Good Things Happen’ for colleagues and suppliers. It will live across social, press, radio and in-store activations as well as this TV campaign which will run until the end of July.

Publicis•Poke has supported the development of the ‘Make Good Things Happen’ brand platform, specifically focusing on creative communications, as well as implementing executions across the whole customer experience and commerce journey.

The UK’s fourth largest supermarket chain founded from a Bradford market stall in 1899 has been Publicis•Poke client since January 2016, and is famed for its Foodmakers and Shopkeepers ‘What we make, makes us who we are’ work in 2018.