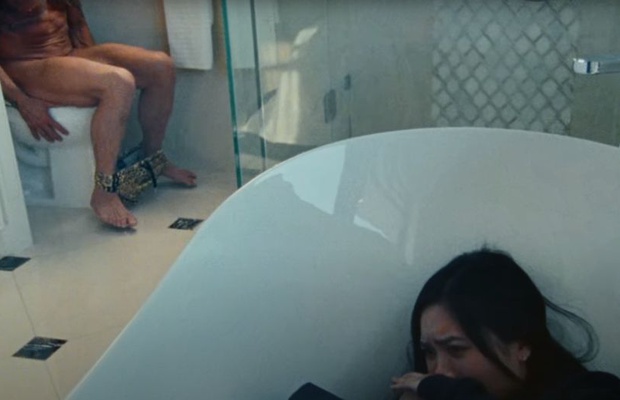 Through the lens of what can only be described as a '70s quazzi-porno meets Home Alone; this film certainly makes one’s eyes pop and think twice about breaking and entering into the mansion of a tatted-up body builder. Starring Adam Muxlow and a cast of likeable yet unlucky thieves, Lum takes us along for a trip complete with spirits, an eclectic taste for interior design, and a few shots that linger too long on one leopard print speedo.

Of the film, director Kasey Lum writes: "I’m so glad the collaboration worked out with the team in the UK. So thankful for them trusting us to produce in a 9-hour time zone difference and seemingly a world apart. We were able to secure a dope location and shot the hell out of it. We shot on Super 16mm film, which added a timeless aesthetic; I find that it worked in subverting the audiences’ expectations of a dramatic and gritty thriller – instead turning into a bit of a slapstick what-can-go-wrong story that we can all enjoy. The cast were so great to work with too – we put them through some … challenges … but I’ll let the audience decide whether they had to do much acting at all."

Sebastien Galina, EP at BOLDLY writes: "The team had a blast making this one – we were giggling all day long sending behind the scenes pics to the label; and they even had us cut a ‘safe-for-TV’ version of the video. We all need a bit of humour these days, and this was just the ticket for a summer banger of a tune!"

Kasey is a Canadian director of Chinese and French roots. Being mixed-race has allowed him to explore narratives that are uniquely inclusive and emotional. He sees the important relationship between music, imagery and pacing. He likes to draw out emotions using classical ways of setting up shots but isn't afraid of running with a camera when the idea calls for it. His gritty visual aesthetic can be seen on music promos for Felix Cartal, Ackee Tecumseh, and Noble Son, while on his commercial side, he’s helmed campaigns for White Spot Restaurants, Okanagan Spring Brewery, BC Cancer Foundation, Sympli, Alo House, Go Auto, and Herschel Supply Co. Kasey is represented for commercials and music videos worldwide by BOLDLY.

Equipment by: The Lockup YVR