Director Trevor Melvin: 'Pay the Train Fare and Don’t Go up the Pub'

Trevor Melvin’s illustrious career started with a Creative Circle Student Award, but he nearly went to the pub instead... 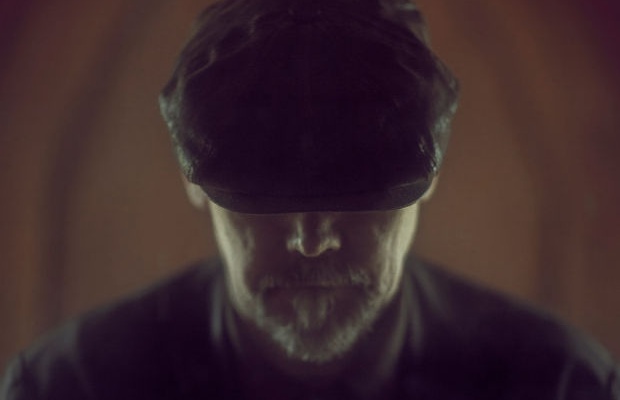 Advertising and directing legend Trevor Melvin has created some of Britain’s best loved commercials but, in 1980, a young Trevor was torn between travelling down to London to try and get his foot in the door or spending the train fare on a pint - almost missing out on one of the biggest moments of his early career. Fortunately, he chose to shell out for the train and the rest is multi-award winning history.
In this interview, Trevor reveals his favourite pieces of work, the “unlikeliness” of his success and how important the Creative Circle Student Awards were to it all.
Q> You won the Creative Circle Student Award in 1980. How important was the award in helping launch your career?
Trevor Melvin> It was absolutely vital. I probably would never have entered the industry if I hadn’t won the Creative Circle Student Award. Not least because I was in the final year of a graphic design course at the local college and fully intended to go on a journey that would hopefully see me designing logos, packaging, book covers and, the holy grail at the time (in my mind), album covers.
Indeed, I had a bit of a sliding doors moment just before I entered my work to the Creative Circle. Should I fork out for the train fare and travel to London to submit my work, or save the money and go up the pub? Obviously, I decided upon the former but I remember the peer group pressure - not to waste my time and money, on a train fare of all things, was enormous. Also, who did I think I was!? Several of my classmates were telling me that it was a pipe dream to think that someone from Stevenage could even think of winning a national award, never mind get in to advertising. However, without trying to sound sentimental, I felt I owed it to my mum and dad to at least try. So, off I duly went to ‘The Smoke’ and dropped off my entry at FCB in Baker Street and the rest, as they say, is history. 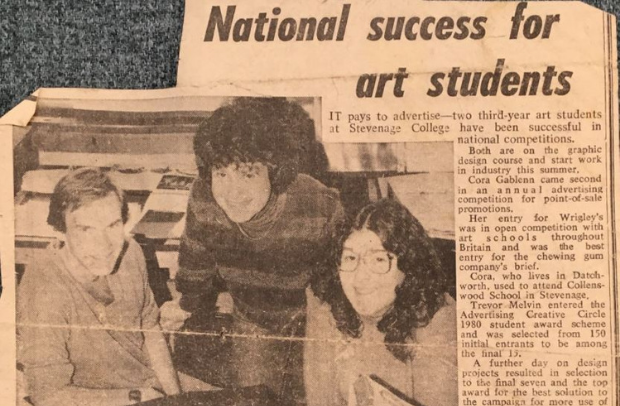 A local newspaper clipping of a young Trevor Melvin (left) fresh from his Creative Circle Student Award win in 1980.
Q> The Creative Circle encourages people at the top to help those at the bottom. How important is it for awards bodies like the Creative Circle to not only recognise young talent, but help find pathways into employment?
Trevor> Well, I guess in some way I’m living proof that the Creative Circle genuinely can help a young creative climb the career ladder, regardless of their background etc.
As I touched on before, who’d have thought that someone like me, who went to the local comprehensive and college of further education, could ever end up as a Creative Group head and board director at one of the biggest ad agencies in the world, or go on to be represented by some of the industry’s foremost film production companies, directing hundreds of commercials in to the bargain. If I’d told my mates at college that all that was going to happen, as I jumped on the train to London to submit my work to the Creative Circle, they really would have told me I had ideas above my station (pardon the pun).
I will be eternally grateful to the Creative Circle for the leg up it gave me. So, in my view, it’s crucial that the Creative Circle and other organisations like it live on. Acknowledging young talent and importantly providing a pathway for anyone with ability who truly wants to get on will ensure the industry personnel remains diverse and the business itself thrives as well.
Q> From all of your award-winning work as an art director and a director, which would you say you were most proud of and why?
Trevor> Like most creative people, I imagine, I’m always very self-critical of my work and ultimately never feel completely satisfied with what I produce. However, I’m pleased to say that there are a few things that I’ve helped to create as an art director and director which have scored well on the ‘Trev-ometer’.
For instance, the ‘Tell Sid’ campaign, which my writer Jeanne Willis and I created for the British Gas flotation. At the time, the slogan worked its way into the vernacular and was used by members of the public to express their own personal views - perhaps the best accolade any ad campaign can ever be bestowed.
Apart from the slogan being written in the dirt on the back of cars and vans, “Tell Sid to Clean Me” etc., a Vicar in Brighton posted a sign outside his church saying, “Remember, Jesus Died to Save Us All, If You See Sid Tell Him.” One dissident in Germany even daubed “Tell Sid” on the Berlin Wall near the Brandenburg Gate.
British Gas | 'Tell Sid' co-created by Trevor Melvin
A Klimt inspired press campaign for Mansfield Clothes, which I also created with Jeanne, is up there for me too. The campaign was photographed by David Hiscock and the typographer was Geoff Halpin. The campaign won a Gold Clio for Best Art Direction, but probably what topped all the awards it received was when Paul Arden of Saatchi & Saatchi rang me personally to say it was his favourite press campaign of that year.
However, one of the proudest moments in my whole career came when the great John Webster, of Smash Martians, Courage Best ‘Gertcha’ and John Smith’s fame, asked me to direct a British Meat commercial that he’d written. John, in my eyes, was and will always be The King of Advertising.
The commercial was part of the ‘The Recipe for Love’ campaign and John’s concept simply involved a day in the life of two pensioners celebrating their Diamond Wedding Anniversary.
What was interesting about working with John was that far from just penning an idea, he would also time out what he’d scripted to the last second and know that the commercial would work perfectly in 30 seconds, or whatever time length it was required to be. However, on this project, he hadn’t made his customary animatic. John suggested we shoot the concept like a documentary and not even have a storyboard; he wanted the various scenes that he’d conceived to be improvised.
I have to say, although he never saw it, I did draw a storyboard for myself so that I had a rough idea of where I’d put our two cameras within the various locations we’d selected, down in Clacton-on-Sea where the spot was made. However, as he requested, we did improvise each scene with the lovely couple, Stan and Olive, who weren’t actors and who had never actually stood in front of a camera before.
As ever, John chose the perfect music track to accompany what we shot, Sonny and Cher’s ‘I Got You Babe’. I really felt the track was the cherry on the cake, it helped the fun and genuine emotion, which myself and all of the crew experienced whilst filming Stan and Olive, come flooding out of the screen.
An interesting side note; I remember, after going through the rushes with the editor, Kirk Baxter (who went on to win Academy Awards for The Social Network and The Girl with the Dragon Tattoo), he was so moved he felt compelled to immediately go off to the local florist and send his mum some flowers back home in Australia.

Q> What have been your favourite pieces of work this year?
Trevor> Well, just off the top of my head, and perhaps I’m reminded of these two spots given the thrust of our conversation; I’m extremely fond of the Department of Education spot ‘Every Lesson Shapes a Life’ which I know was 2018 but I wanted to mention it. That and also Apple's ‘The Underdogs’. The best compliment that I can pay both films is that I wish I’d directed them. I also really like the Lacoste epic, ‘Crocodile Inside’. Love the scale and ambition of it. The Buster Keaton homage at the end has been fabulously executed, although I’m sure the two protagonists didn’t face the same life threatening danger as ‘The Great Stone Face’ did when he actually performed the same stunt for real back in the late 20’s!  I’m a fan of the very recent Zalando ‘Freestylin’ spot too; memorable and funny, beautifully entertaining. Great work!
Q> What advice would you give to young people starting out in the industry today?
Trevor> Turn up. Be bothered. Pay the train fare and don’t go up the pub.
Q> Ole is at the wheel, but where is he taking you?
Trevor> All the way!
About Trevor Melvin:
Initially cutting his teeth as an art director with Grey Advertising, Trevor went on to work in several of London’s top agencies; Yellowhammer and Young & Rubicam - producing some of his most prolific pieces, such as ‘Tell Sid’ for the British Gas flotation.
Then, moving to directing, Trevor debuted with self-written neo-noir drama ‘The Dogs’ - earning a Best European Short Film nomination and fervent praise. A career riddled with excellence, Trevor moved between Blink Productions, Weilands and Ridley Scott Associates - picking up awards at Cannes and further afield. Widely considered one of the UK’s most-established commercial talents, Trevor has directed and art directed ads for several leading brands - most infamously Barclays, Volkswagen, Sainsbury’s, British Meat and Kit Kat.
For more of Trevor's work click here.