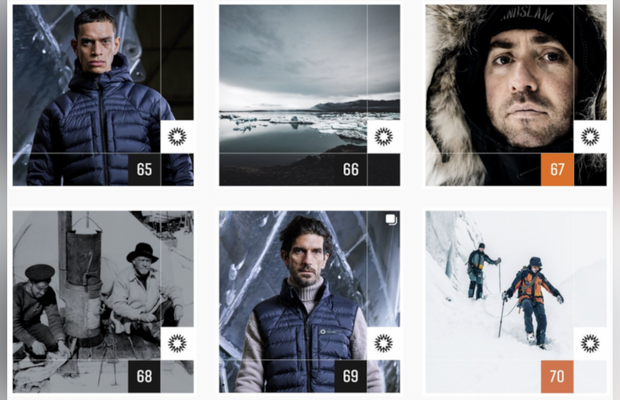 Launched and executed by Dirt & Glory Media, the countdown to the centenary of the death of legendary polar explorer Sir Ernest Shackleton is in full swing on the social media channels of luxury performance clothing brand Shackleton.

Honouring the legacy of one of Britain's greatest leaders, the project blends historical snippets that shed light on Shackleton's life and adventures with key seasonal updates from his namesake brand covering new apparel, events, challenges and expeditions.

The two-part expedition, supported, guided and equipped by Shackleton, forms part of Hewitt's attempt to become the first person with a disability to complete the Explorer's Grand Slam, which challenges adventurers to reach both Poles and summit the highest mountains in each of the world's seven continents.

The two men begin with a 45-day, 1,000km trek to the South Pole before turning their attention to climbing the 4,289 metre Mount Vinson.

Setting the scene for the epic challenges ahead, Dirt & Glory Media have created an expedition teaser film set to the rousing soundtrack of a section of Theodore Roosevelt’s famous 'Citizenship in a Republic' speech, narrated by actor Nick Moran (Lock, Stock and Two Smoking Barrels / Harry Potter and the Deathly Hallows). Footage is provided by Skyrise Productions and edited by Craig Coole.

Dirt & Glory founder Nigel Brown said: “Working on the anniversary countdown and Adaptive Grand Slam record attempt for Shackleton is something we consider to be a real privilege, with work that sees the brand explore every aspect of the great man. It’s so fitting Shackleton is supporting Martin Hewitt on his record breaking Antarctic attempt, and it’s a privilege to creatively communicate his incredible unfolding story on the ice.”

Martin Brooks, Shackleton co-founder says: “Dirt & Glory were the perfect partners to look after our Centenary social media communications. They are shining a light on the Boss in a different guise every day, through incredible photography, short films. interviews and new product launches. The relentless daily updates mirror Shackleton’s own courage and qualities of endurance in adversity. There couldn’t be a more fitting tribute; but then we have Martin’s incredible attempt across Antarctica, that will inspire future generations, much like Shackleton has, and will continue to do so for another 100 years.”