The Public House has created a campaign to promote EPIC The Irish Emigration Museum’s latest exhibition, which shares the stories of Ireland’s LGBTQ+ emigrants 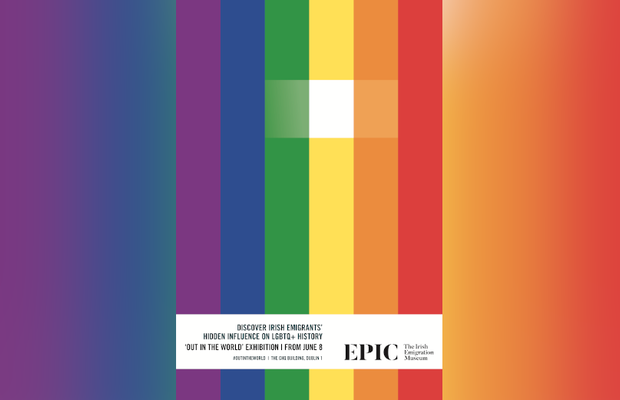 As a nation Ireland has led the way for LGBTQ+ rights with the marriage referendum in 2015. However, some people only know Ireland as the progressive and inclusive country that it is today, and many know very little about the lives of the LGBTQ+ diaspora community in years gone by. The campaign highlights this with a subversive Irish flag hidden within Gilbert Baker’s famous pride flag, a symbol of LGTBQ+ pride.

Ireland set an example for LGBTQ+ rights in 2015, when it became the first country to vote for marriage equality in a national referendum. However Ireland has a less inclusive and sometimes oppressive past. This campaign and the subversive Irish tricolour hidden within Gilbert Baker’s famous pride flag, hint at the many hidden stories EPIC are putting out into the world in their new exhibition.

The campaign features outdoor & social media in support of the exhibition which opened in The CHQ Building from June 8th, with free admission for the month, as part of the Dublin Pride celebrations and runs until Dec 1st 2021.

Dr Maurice J Casey, DFA Historian in Residence at EPIC: “Our new exhibition Out in the World explores how there is an Irish emigrant history in the LGBTQ+ story and how there are LGBTQ+ stories throughout the history of Irish emigration. The creative design from the Public House highlights this core pillar of the exhibition through its subtle reveal”

Aileesh Carew, director of sales and marketing at EPIC: “We are extremely proud and excited to share these previously untold stories of Irish LGBTQ+ emigrants. This exhibition is a chance to understand Ireland and its impact on the world through the lens of our LGBTQ+ emigrants. After a tough year for the tourism sector we’re looking forward to welcoming people in to see this exhibition.”

Commenting on the campaign, Jarrod Banadyga, creative director, The Public House said: “This exhibition is another example of EPIC continuing to surprise us with the stories they uncover and illuminate within the Irish emigrant experience. Out In The World deserved an approach that got to the heart of the exhibition with a visual demonstration of the LGBTQ+ stories that, up until now, had been relatively hidden.”

EPIC The Irish Emigration Museum is a state-of-the-art interactive experience located in the beautiful vaults of the 1820 Custom House Quarter building in Dublin’s Docklands, the original departure point for so many of Ireland’s emigrants. Featuring personal stories of love, triumph, adventure and adversity, it highlights and celebrates the positive impact and influence of Irish emigrants around the world. Described as one of Ireland’s National Treasures, EPIC was named Europe’s Leading Tourist Attraction in the 2019 and 2020 World Travel Awards. For more information please visit www.epicchq.com or search #EPICmuseum online.

The Public House have been working with EPIC since 2018, and since then have helped the museum take Donald Trump to task for his views on immigration, and challenged the plastic waste associated with St. Patrick’s Day celebrations through a free ticket amnesty in exchange for plastic tat.

The campaign for The Public House continues a successful year with the growing independent creative agency’s clients include FBD, Barnardos, Redbreast Irish Whiskey and Paddy Power. The agency is known for its strategic rigour and creative edge that delivers for its clients, with a principle that ‘Boring Doesn’t Sell’.