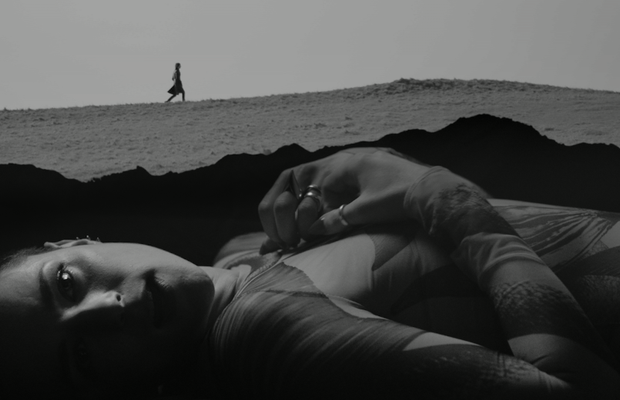 The promo was shot in black and white with an avant-garde aesthetic featuring positive/negative overlays, inspired by Douglas’ knowledge of Japanese photography and cinema of the 1960s, in particular Hiroshi Teshigahara’s debut feature ‘Otoshiana’ (‘The Pitfall’).

Bobby Gillespie emerges, spectre-like from a forest and walks alone along a deserted beach, while Jehnny Beth cuts a similarly lonely figure as she strolls through a wood, in imagery that seems fitting for the Covid-times of self-isolation we have been experiencing during lockdown. Bobby and Jehnny were filmed separately, and come together in the film’s post-production using silhouette and cinematic overlays, with overlaid images evoking Man Ray’s Rayograms and portraits of Lee Miller.

Director Douglas Hart commented: “For the most part in the video both Bobby and Jehnny are seen separately in contrasting locations and in contrasting light. When they do come together in the same shot, their individual images are overlaid or collaged together. For me this reflects how I read the lyrics of the song. It seemed to me that these were two internal monologues, rather than a conversation. The video was shot in Dorset because it provided  the geographical drama needed for a song like this.”

The surreal music video was shot on location in Dorset on an Alexa Mini, with Hart at the helm as director and DOP Ruairi O’Brien. Executive produced by Juliette Larthe and produced by Chris Murdoch.

Douglas Hart has enjoyed a long and prolific career which kicked off playing bass in 80s band ‘The Jesus & Mary Chain’. He is something of a polymath with musical talent as well as an artistic eye and encyclopaedic knowledge of film, which led him to directing music videos for some of the most iconic artists of the 80s and 90s including; The Libertines, Paul Weller, Primal Scream, The Horrors, The Vaccines and The Stone Roses. As well as making a name for himself as the go-to director for rock bands, Hart has made short films (winning the Short  Film Award at Rushes Soho Shorts in 2012) and been commissioned by The Stanley Kubrick Foundation and James Lavelle to make a film (titled ‘Anywhere  Out of This World’) for the 2016 Somerset House exhibition ‘Daydreaming with Stanley Kubrick’.

Douglas Hart is also part of ‘Call This Number’, originally created by Douglas Hart, Jeannette Lee and Steve Mackey, they formed in 2015 as an antidote to the archival nature of pop culture, describing their collaborations as ‘pirate TV for the internet age’. Call This  Number now comprising of Hart and Mackey who now have created 360 visual experiences for artists, brands, fashion houses and performers including; Moncler, Fila, Miu Miu, Schiaperelli, Jeremy Deller, Jarvis Cocker and Primal Scream.

Title: “Remember We Were Lovers”