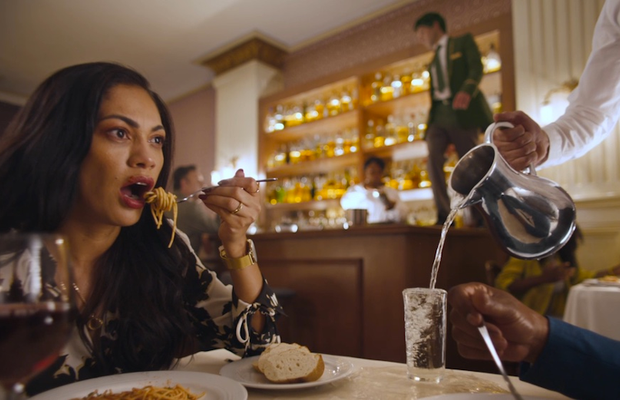 It’s Feet Hurt O’Clock in the new campaign for Dr. Scholl's. In a busy hotel lobby and on a carnival fairgrounds midway, people are frozen mid-action. Everyone, that is, except Tom and Rose who have a spring in their step and energy to spare thanks to two secret weapons: Dr. Scholl's Custom Fit Orthotics & Dr Scholl’s Insoles with Massaging Gel. Artfully designed and elaborately choreographed, the playful spots are a visual feast created by agency JOAN Creative and directed by kaboom’s Plummer/Strauss.

“The opportunity to put a fresh spin on a brand as iconic and legendary as Dr. Scholl’s was so exciting. We loved thinking about their products in these heroic terms - while the rest of the world feels dead on its feet, you have all the freedom in the world. What a magical, whimsical world to create, and what a joy it was working with Plummer/Strauss to create it,” says Lauren Costa, JOAN creative executive creative director.

The Dr. Scholl’s campaign was made possible by a seamless collaboration between agency, production, and visual effects. JOAN Creative’s vision for complex frozen moment scenarios was a perfect pairing with directing duo Plummer/Strauss, known for intensive planning to craft visually layered narratives.

The spots are a unique hybrid of story-driven technique punctuated by physical humour. Filmed in Mexico City, the locations were modified with practical elements to provide the perfect spaces within which the detailed action (and inaction) would take place. It was also where the agency, production and VFX teams united with an 'all in' approach to delivering the whimsical work.

“This was an ambitious project on many levels but everyone involved took each challenge as an opportunity,” says Justin Plummer III. “It started with the agencies’ great concept and an openness to building ideas that would support it, and continued through to our production service partners and the VFX team.”

“We always do a lot of planning and ideating including filming an animatic so that we can really see how everything should come to fruition,” adds Martin Strauss. “Here, the intensity of creative alignment and orchestration with the agency creatives and the other partners meant the shoot days were super-productive and really enjoyable.”

You may not have heard of Feet Hurt O’Clock, but you know when that time arrives. Now, you also know the secret of how to avoid it and keep moving: Dr. Scholl’s Insoles provide shock-absorption, cushioning and relief for tired, achy feet; and its Custom Fit Orthotics’ foot mapping assessment tool provides a customized cushioning solution to deliver comprehensive pain relief. Both give you more energy to do more of what you love.