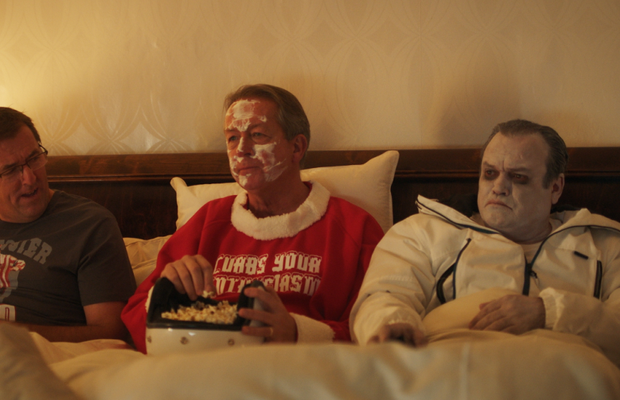 Shaun Williamson – a national treasure for his absolutely iconic role of Barry Evans in EastEnders – has returned to screens this Christmas, in comedy series Pundits.

In the show, which is made and published online by Paddy Power, Williamson plays the ghost of Christmas present, as he haunts Southampton legend Matt Le Tissier.

That’s because Le Tissier has abandoned ex-Liverpool man Phil Thompson and Charlie Nicholas to go solo – despite the trio agreeing to stick together after their controversial sacking by Soccer Saturday at the start of this season.

He also mocks Le Tissier’s loyalty to Southampton and his lack of England appearances: “If you weren’t so lazy, you could’ve won a few more England caps – you and Gazza in midfield. Just imagine it – England could’ve won Euro 96!”

Former Charlton manager Alan Curbishley is also involved (because what else would he be doing?) but it’s Williamson who steals the show with his star turn.

It’s the second episode in a three-part Christmas series, with the finale airing on Boxing Day. All episodes – as well as the first series – are available on Paddy Power’s YouTube channel.

A Spokesman from Paddy Power said: “Getting a household name in to appear in Pundits, we wondered if Barry would be a bit of a diva – but he was the opposite, arriving early, and nailing his lines.

“He did have one request, though – that I stop calling him ‘Barry’, but that’s easier said than done when you’ve created one of the great characters of TV history.”