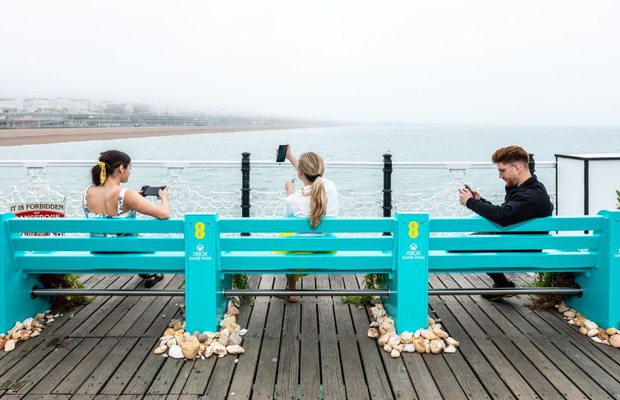 With the mobile gaming growing rapidly in popularity, EE has unveiled two 'Gaming on the Go' Pit Stops in 5G locations; one on Brighton seafront and another on Liverpool’s Royal Albert Dock – to celebrate its new Xbox Game Pass Ultimate add-on and to help players re-immerse themselves into the gaming world.

EE’s Gaming on the Go Pit Stop benches come as the UK’s best network for gaming reveals almost three quarters of British gamers have gamed outside of their home in the last year. Custom built to deliver an enhanced gaming experience for up to three mobile gamers at a time, each bench allows EE’s 5G customers to harness the power of the award winning network in each location to ensure smooth, uninterrupted gameplay and is equipped with superfast chargers. 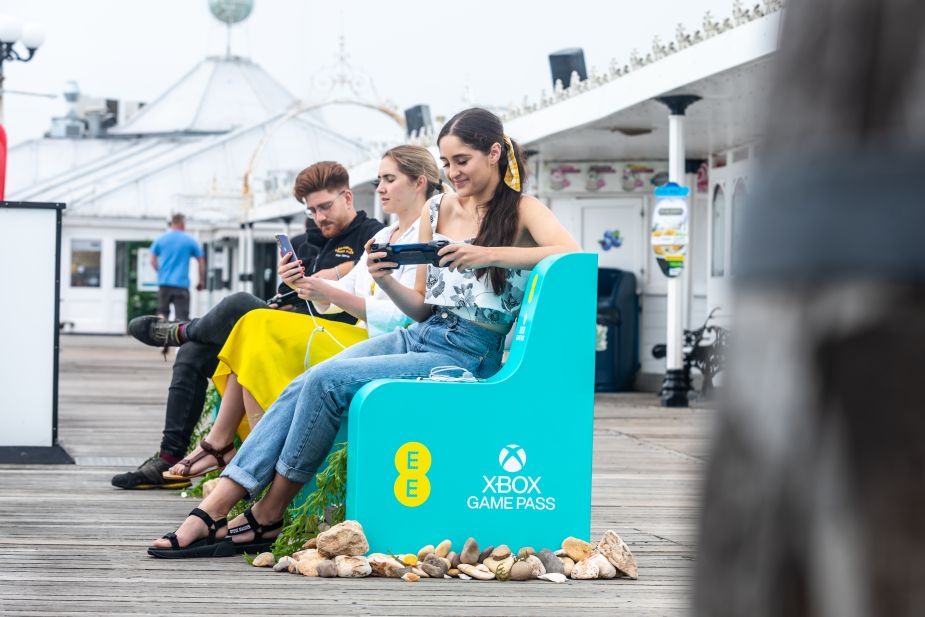 Amplifying their surroundings and taking inspiration from some of the most popular games in the Xbox Game Pass Ultimate library, EE’s Gaming on the Go Pit Stops are the perfect way to truly get lost in the moment and take the gaming experience to the next level.

With nearly half of gamers in the North West and South East saying a faster mobile connection would make them more likely to game on the go, the benches are situated in the perfect location to rest, recharge and reset enabling gamers to get their head firmly back in the game. 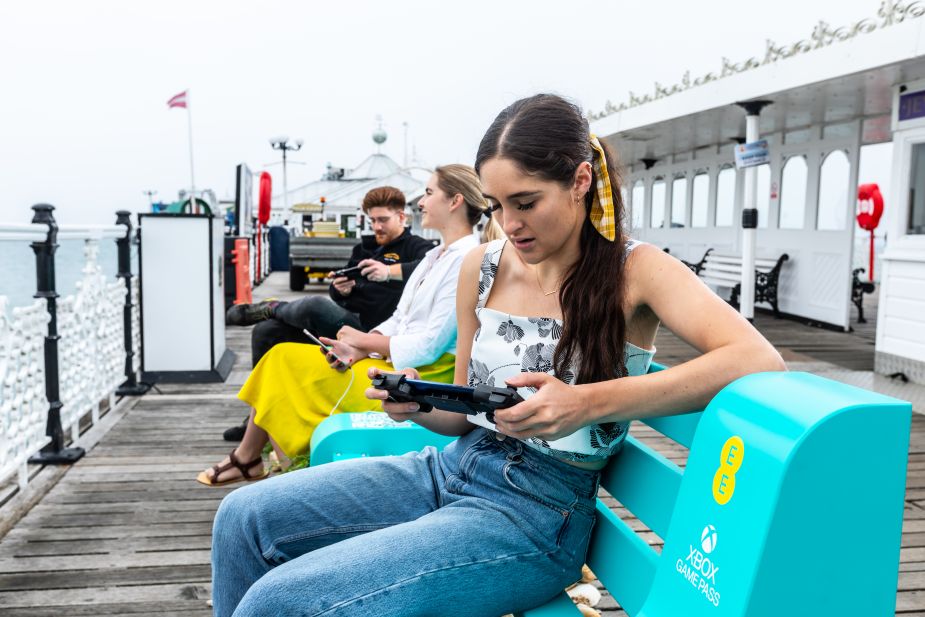 Influenced by its seaside setting, the Brighton Pier Pitstop Bench, surrounds gamers with the sights, smells and sounds of the seaside, transporting them to another world when playing games set on or around the ocean.

In contrast, Liverpool’s Royal Albert Dock Bench takes form of a more familiar racing pit stop, situated in a busy industrial city centre, taking inspiration from many driving and racing games. Further heightening the experience for users, this bench comes complete with custom racetrack sounds to further blur the lines between the gaming and physical world.

Alongside the launch of the 5G Gaming Pit Stop Benches, EE is giving two lucky gamers the chance to win 12-months of Xbox Game Pass Ultimate, which unlocks access to over 100 Xbox games on the go, and a Razer Kishi controller. To enter, customers simply need to take photos of themselves at the EE Gaming Pit Stop Benches and upload these onto Twitter and/or Instagram with the hashtag #GamingUnleashedBrighton or #GamingUnleashedLiverpool and tag @EE to be in with a chance of winning. 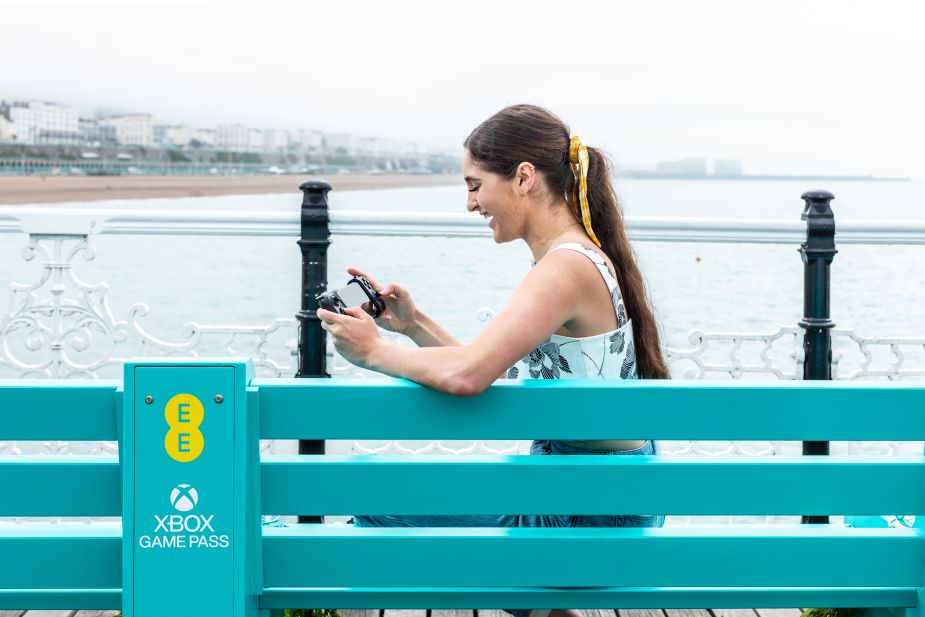 Pete Jeavons, Director of Marketing Communications at BT and EE commented: “Our recent research shows that gaming on the go is continuing to rise and as the UK’s best gaming network we wanted to enhance this experience in a fun and truly immersive way. In celebration of our new Xbox Game Pass Ultimate add-on, which gives our customers unlimited gaming data and access to over 100 games, our aim is to provide the best gaming on the go experience for our customers. The immersive Pit Stops allow gamers to re-immerse themselves in the gaming world. Connected with our high-performance network and fully charged with the inbuilt superfast chargers for the ultimate uninterrupted game play experience.”

According to the research, in the year that made going for a walk more important than ever before, dedicated gamers have quickly taken to multitasking, with 1 in 5 now gaming on their smartphone whilst getting their outdoor exercise. This comes as EE reports that it saw a 31% increase in data usage across some of the most popular mobile games on the network – from the last three months of 2020 to the quarter of 2021.

The Xbox Game Pass Ultimate add-on gives gamers access to over 100 Xbox games on the go which EE is offering with inclusive data, for just £10 a month*. Customers will be able to enjoy a range of games on their smartphone via Xbox Cloud Gaming (beta), including Forza Horizon 4, Sea of Thieves and Halo: The Master Chief Collection.

The EE Gaming Pit Stop Benches will be available at Brighton Pier from 10th to 13th June and Royal Albert Dock in Liverpool from 10th to 11th June. For more information on EE’s Gaming offering, head to ee.co.uk/Gaming.

The social media competition is open from 08:00 on 10th June until 23:59 on 13th June and the winner will be announced on 15th June via Twitter and Instagram.